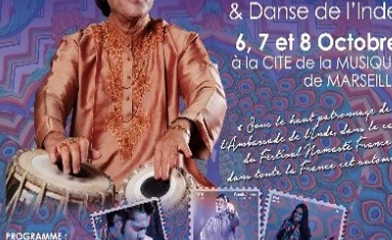 Celebrations are on in Paris, at the ongoing Namaste France Festival from 15th September, 2016 to 30th November, 2016. Organized by the Embassy of India, Paris with the support of Indian Council for Cultural Relations (ICCR), New Delhi, it is but assumed that only the BEST out of India is being showcased. Events are being hosted in all the major French cities like Paris, Strasbourg, Nice, Nantes, Marseilles, Lyon, Aix-en-Provence, Saint-Tropez, Tourcoingetc and in the French overseas territories like Guadeloupe, Martinique, St. Martin and the Reunion Island. The cultural heritage of India is being showcased at this festival via 70 events in the fields of music, dance, theatre, cinema, art exhibitions, cuisine, spirituality, yoga and Ayurveda etc.

THE CITY OF GOLD 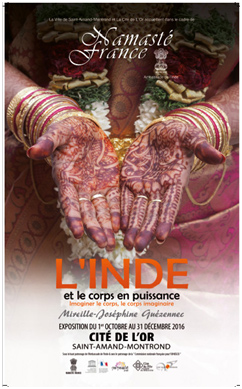 The theme of her latest showcase is titled ‘India: the powerful and potential body- Imagined and Imaginary body’. It is important to know that Mireille Joséphine Guézennec has studied Sanskrit, Vedic Philosophy, Jyotish Vidya, has published several books on the Ganga, spent many years in India, and even has an Indian name, ‘Himabindu’, by which she is popularly known. She is also the 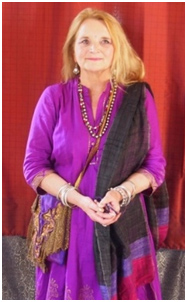 winner of several photography awards, She explains the theme of her photography exhibition as follows.

“In India, tradition says that the body is endowed with power. It is a microcosm, a perfect reflection of the grand universe, the macrocosm. The awaken body has an innate and incredible potential, as revealed by ritual texts, beliefs, rites and celebrations that punctuate the life of every being. By knowledge and the practice of yoga, the vital energy, or prana, our connection to the cosmos infuses a puissant power to the body in reverence to the potential of its subtle energies.

In the art of sacred dances and ancient classical theatre, its sublime beauty is embellished with several myths and founding histories, recounted in the great epics. The animated attire of the artists is an in-depth ode to these myths: a both subjective and archetypal language. Similarly, daily ritual symbols, ornaments and jewellery that adorn the face and limbs are much more than embellishments. Beyond their aesthetic dimension, these ornaments have a symbolic function. They reflect religious guidance as well as spiritual, social and cultural values giving the secular body a soul : its sacred essence.”