The Indian fashion industry is relatively young compared to its Western counterparts. The older designers who had attained iconic status in the early days, held sway for decades and lacuna was beginning to set in over the years. Season after season, it was the same old repackaged. Happily, this time I saw a shift. The pioneers in the business have realised that they have to keep reinventing their creativity to stay in the race. Timely too, as the onslaught of the next generation designers seems to be getting tougher and extremely aggressive with young blood being quite impatient in wanting to be in the limelight.

At Lakmé Fashion Week Summer/Resort 2018, the heavy weights on the fashion scenario aimed their collections to both the mature buyers, as well as the millennials who are more style savvy and eager to fill their wardrobes with some well-known brands. 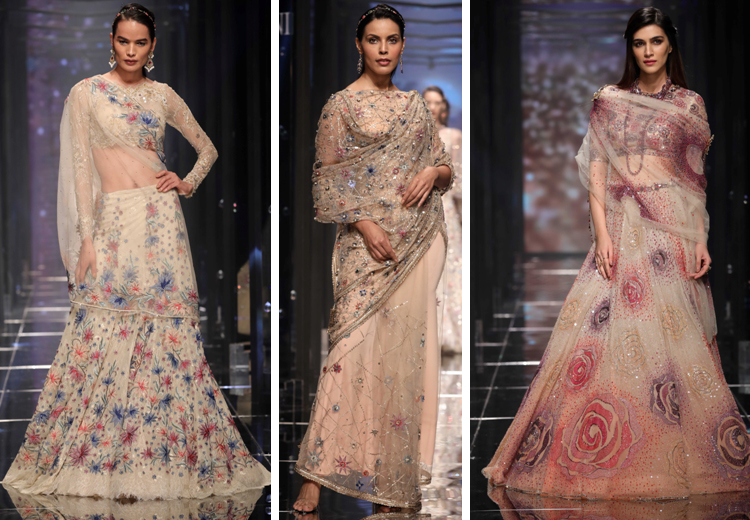 The master of drapes ensured that there is still no one who can beat him when it comes to conjuring up ultra-glam creations. His “Tarakini” line was an inter-galactic wonder with the most exquisite embroidery for bridal wear that will make brides float around on their wedding day. Gone are the days when a bridal creation had to weight 25 kgs and it was necessary that the blushing bride was as physically strong as the love of her life to carry that burden through the long ever-lasting reception.

Tarun’s offering is now weightless, light as air and stunningly beautiful to keep the bride not only happy but the centre of attraction and the envy of all.

SHANTANU AND NIKHIL – Reinventing Each Season 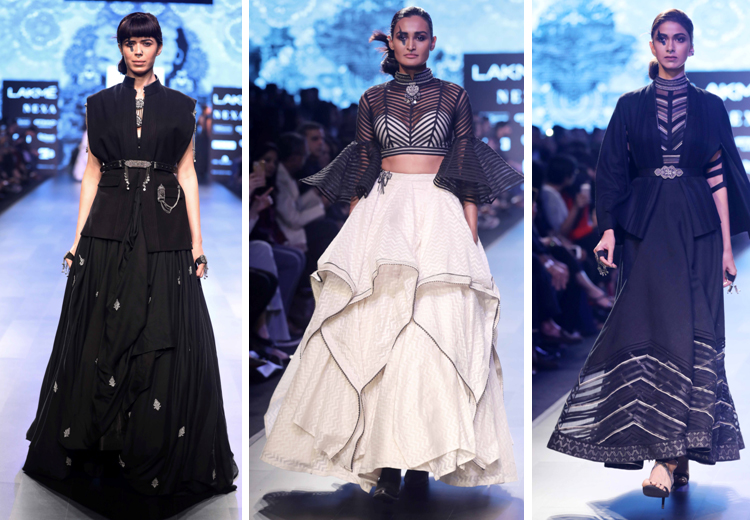 This pair of talented brothers have made it a point to not only reinvent men’s and woman’s wear each season but they have paid homage to the Indian traditions and eras of the country and projected them in a fashionable manner. Their latest collection “The Tribe – The India Story” was a modern take on traditional clothes with just three colours – black white and Chrome. Their draped asymmetric men’s wear now has a great following with several similar knock-offs flooding the market and inspiring the Gen Next entries. There were drapes and micro pleating along with interesting fabrics that gave the garments a unisex appeal.

Shantanu and Nikhil have moved with the times ensuring that their collections can be not only be identified by the fashionistas but their influence trickles down the fashion chain. 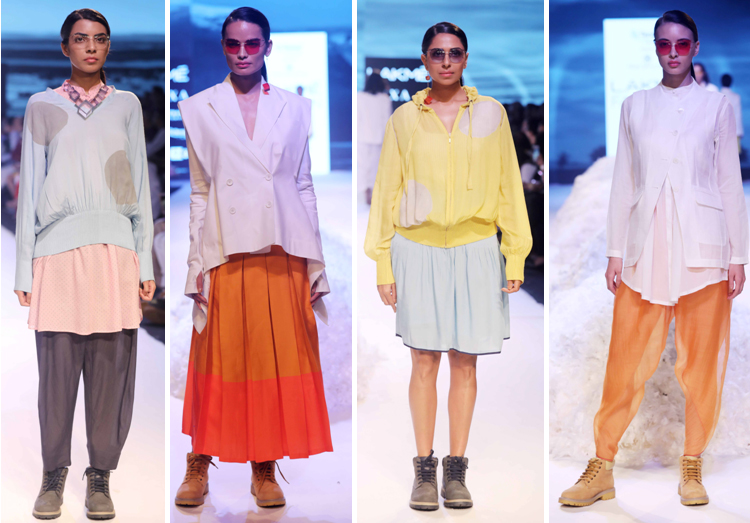 Here is a designer who has maintained his identity at all times with his signature pin tucks and pleating being in the forefront. But for the 21st century, Rajesh Pratap Singh has moved comfortably into the sustainable zone and his latest Tencel™ collection was a study in eco-friendly fabrics that were woven on the hi-tech air jet, shuttle less and power looms as well as handlooms. The result was a unique fabric with Tencel™ yarns, which were blended with silk, and stainless steel to create a millennial wonder. It was a fresh look with happy colours (which is something new for Rajesh) that will appeal to a cross section of buyers since the collection was not only young at heart but strong on style sensibilities. 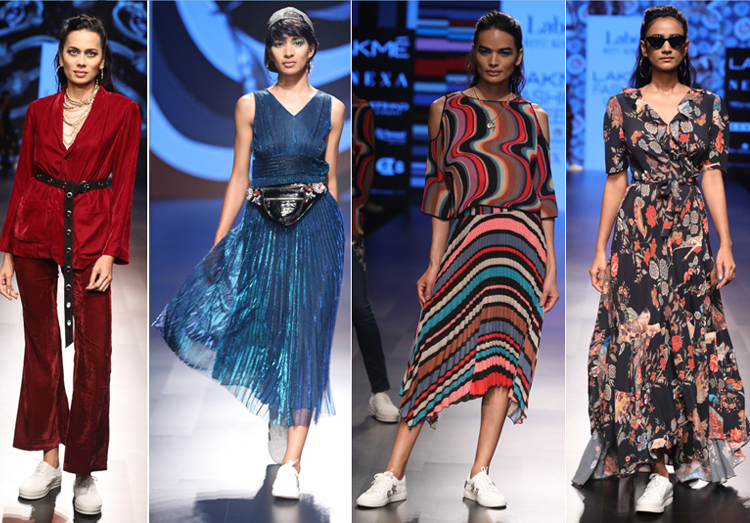 The doyen of fashion who has been in business for over 45 years knows how to reinvent her brand and stay in the forefront. Ritu Kumar is still the ultimate name for traditional bridal wear and amazing block prints. But now “The Label Ritu Kumar” created by her son Amrish in 2002 has turned into a stand alone label that can command sales to match the umbrella brand. The Label Ritu Kumar’s “Hip Hop Baroque” collection was fun, feisty and colourful, which will appeal to the trendy girls of the fashionable millennium. The collection had a wide range of fabrics, wild prints and a retro appeal with a contemporary flavour. 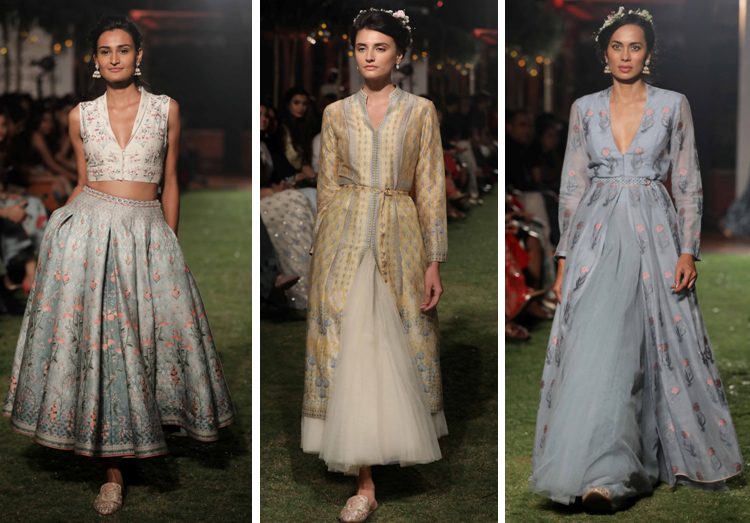 The name Anita Dongre is mentioned with great reverence since the designer’s success story has not only been the envy of the fashion world but her creations are also coveted by celebrities and royalty globally. Anita knows the correct meaning of ‘Reinvent’ and does not only have an empire comprising her labels, AND, Global Desi, Grassroots, and Anita Dongre, but she has never hesitated to go where no woman has gone before. Her latest fashion adventure is with R | Elan the new eco-friendly fabric brand with which she created her “Songs of Summer” bridal wear collection at Lakmé Fashion Week Summer/Resort 2018. The garments had Anita’s signature touch with a variety of lehengas, cholis, kurtas and dupattas with her favourite ‘Tree of Life embroidery that will surely turn them into hot sellers. Her trademark pockets appeared for the lehengas and the embellishments were glitzy but not overtly flashy. 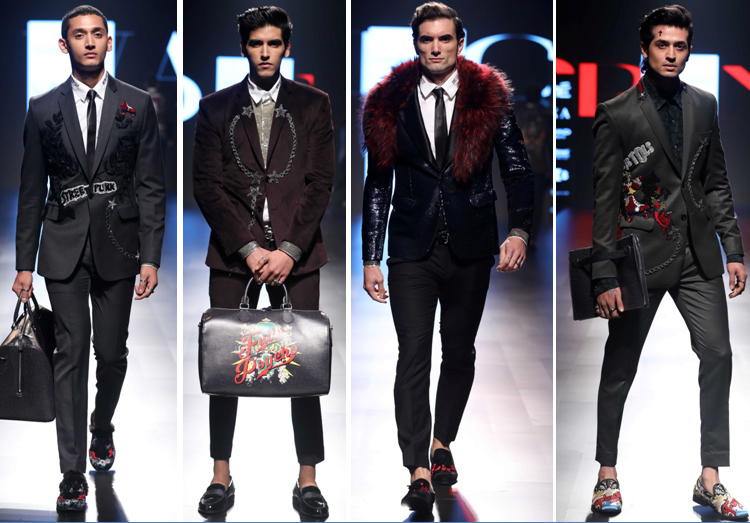 This husband and wife-designing duo has crossed the seas and created a clientele in the West that adores their futuristic, ultra-modern creations that can match the creativity of any western haute couture brand. After dressing the Hollywood and Bollywood stars on the Red Carpet, including fashionistas like Paris Hilton, Jennifer Lopez and Lady Gaga to name a few, for Lakmé Fashion Week Summer/Resort 2018, they felt it was time to move onto more masculine territory to increase their fashion following and launched their men’s wear collection called ‘Louche’. It was branded cleverly with the “fsp millennials” logo and aimed at the stronger stylish sex that wants a wardrobe, which is fun, flashy and fashionable. 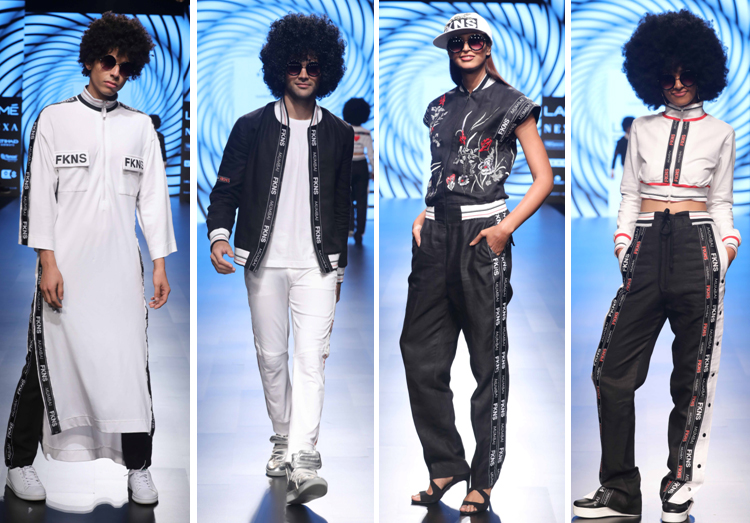 The designer knows the art of grabbing eyeballs in a sea of fierce competition in the style business. If at a fashion week the Gen Next is pushing their androgynous, gender-neutral, collections then Narendra Kumar will select a relevant social cause and turn it into a fashion story. His latest inspiration was fake news that has been creating headlines all over the world, so his collection called “The Fake Show” was a clever interpretation of the athleisure sporty theme in just black, white and red – colours of the newspaper business. An expert at creating bespoke suits in the past for both sexes; this season he trained his sight on a fashionable sporty look that will appeal to men and women who are rebels at heart and not scared to reveal their attitude with their sartorial preferences too.