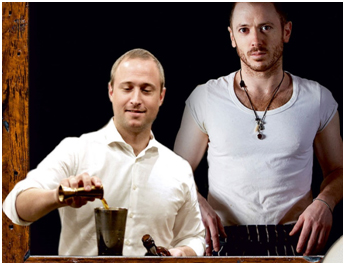 Delhi’s fine dining zone will have a high moment at Baluchi, the pan Asian restaurant at The Lalit New Delhi, where Chef Ollie Dabbous and mixologist Oskar Kinberg, co-owners of the Michelin-starred Dabbous, London, will showcase their skills for just four days, from 29th September to 2nd October 2016.

Among the highlights will be an unforgettable dinner featuring bespoke dishes by Ollie that will combine contemporary London creations with local flavors to be held on Saturday, 1st October, 2016, from 7.30 pm onwards. Make reservations in advance to not be disappointed.

Oskar Kinberg will mix some of his signature cocktails at Kitty Su, the club at The Lalit. This will be a ticketed event. 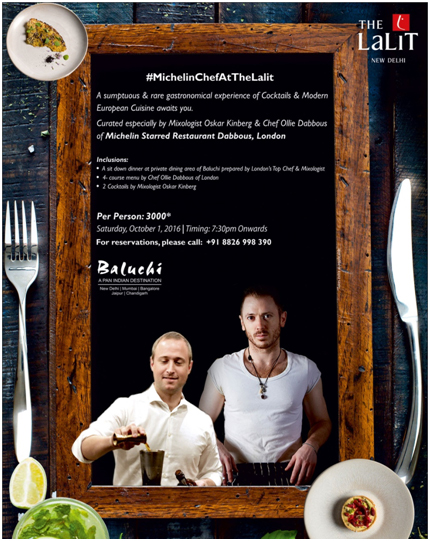 The popular haunt of the hip crowd in Delhi, Kitty Su is the only Indian club to be featured in DJ Mag’s Top 100 Clubs list.

Baluchi will soon arrive in London with opening of The Lalit London, the first oversea property of The Lalit Suri Hospitality Group due to open later this year.

Speaking about the upcoming trip, Ollie Dabboussaid , “We are very excited to be travelling to The Lalit New Delhi later this month. It is a wonderful opportunity to show a new audience what we do and it will be an honor to prepare dishes and cocktails for both foodies and dignitaries alike. Both myself and Oskar are looking forward to incorporating local ingredients into our recipes.”

Keshav Suri, executive director of The LalitSuri Hospitality Group, “We are honored to be associated with two of the leading figures on the London hospitality scene. As well as consolidating our position as one of Delhi’s leading foodie destinations, this residency will also serve as a curtain raiser for our activities in London later this year.”