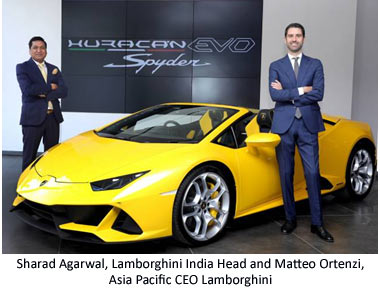 Clearly, the denizens of India, those that have the money, want a luxury car parked in their driveway. The one deterrent is the prohibitive taxes on luxury vehicles, where the on-road price for a super luxury car can be go up by nearly 150-200%. Matteo Ortenzi, Asia Pacific CEO of Lamborghini is in India for the launch of Lamborghini’s new model, Huracan Evo Spyder, the price of which starts from Rs 4.1cr in India, as against just half of that in the US market, where the taxes are lesser. He is reported to have said that he sees growth potential in the Indian market, despite the high taxes. However, he noted, “If the tax structure changes continuously, the business strategy goes for a toss. We have a wait-and-watch approach to taxation changes in various countries. If tax rules don’t change every year, the Indian market has huge potential.” He further added, “The luxury car makers are used to high taxation regimes. But what is more important is the consistency and long-term approach.”

Even at a time when the auto stocks are in a slump and the luxury car market in decline, Lamborghini has projections for 2019 of 30% growth in sales to 60 units. The demand for its, super sports utility vehicle Urus has been good, making Lamborghini the first super luxury car maker in India to sell more than 50 vehicles in a year. Lamborghini India sales volume is less than 1% of the global sales of Lamborghini. And Ortenzi wants to change that to make India as one of the top 10 markets for Lambhorgini in the world. “India has a population of 1.3 billion. It is the fifth largest economy in the world and the wealth of the people is growing consistently. India is fast upgrading the infrastructure. These factors will facilitate the luxury market to grow,” he said. Keeping a long-term approach, Lamborghini India Head Sharad Agarwal, said they are  evaluating markets such as Hyderabad, Chennai, Kolkata and Ahmadabad for opening new showrooms. 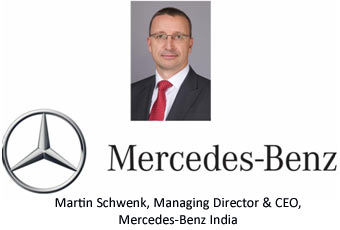 As for Mercedes-Benz India, it crossed the 10,000 units sales mark in the first week of October, retaining its position as the largest luxury car maker in India. The company has also confirmed its plans to commence its product offensive from Q4 to take advantage of high customer interest and positive sentiment. Martin Schwenk, Managing Director & CEO, Mercedes-Benz India commented: “We are glad to maintain our market leadership in the luxury car market despite facing strong macro-economic headwinds from the earlier quarters, and also having a higher base in the segment. We are equally excited to witness great consumer feedback on our products in September. On the back of a strong September performance, we have already crossed the 10,000 units mark in the first week of October and are confident of maintaining this growth momentum by leveraging the upbeat customer sentiment. Of particular satisfaction has been the 160% growth in the Dream Cars segment, which once again underlines the luxury customers’ strong faith in the three-pointed star. We are hopeful and expect sales to rise slightly in the full year.”

The company also recently introduced connected car technology for its existing models, as well as previous models that were manufactured in or after 2007. The technology will give the user data such as vehicle health, refuel stops and roadside breakdown management.