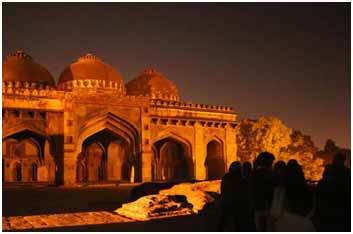 A whisky-walk sounds like a contradiction in terms that the propensity to walk the straight line is indirectly proportional to the quantum of Patiala pegs down the hatch. In sum, it was actually Walk first Whisky later kind of evening. Organized by India City Walks,it was first encounter for many in the group, with the heritage tombs of Muhammed Shah and Sikander Lodi in the beautiful namesake garden. A very engaging concept, where the first part was cut short in view of the late hours and dusk having descended a tad early.

The more relaxing segment dedicated to Glenfiddich single malts was led by Anchal Kaushal from Liquid Sunshine, who introduced the Glenfiddich 12-year old, 15-year old and 18-year old whisky. Lodi – The Garden Restaurant paired with a few rounds of canapés.

The interactive session had the audience paying more attention to the golden liquid than the conversation, which progressively got more animated. Anchal talked and quizzed, tasting notes, peaty? Woody? ‘Guess this scent’, clove? Fun. Last round of votes – my personal favourite was the Glenfiddich 18YO Single Malt Scotch Whisky. Full bodies, nutty, fruity, sherry aftertaste. Anchal recommended a splash of water to release the other more complex flavours. Hmm, I am happier without the H2O.