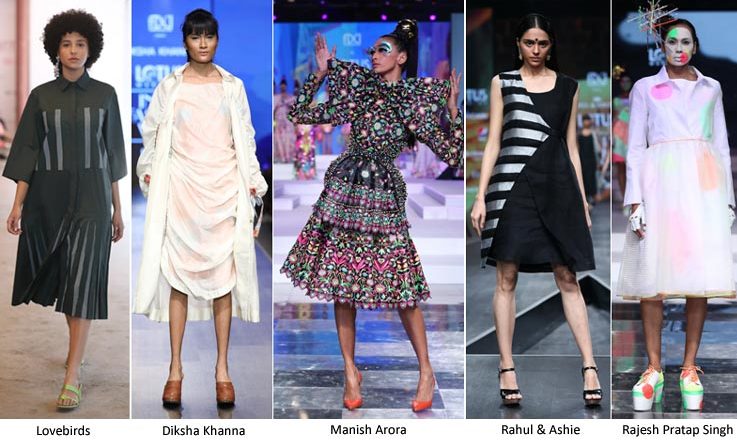 How the visual and silhouette of the dress has changed over the centuries is quite remarkable. There was the unstitched toga in the Roman and Greek eras and before that the humble animal skins that women used to cover their bodies. As the centuries rolled by, the various amazing versions of the gowns emerged on the English, French, Italian, Spanish and European charts.

The Roaring 20’s brought the spritely Charleston dress to the forefront named after the vigorous dance that caught the fancy of the women. During the 20th century post World War II, the New Look unveiled by Christian Dior in the 50’s was an instant hit.

Came the 60’s and the mini promoted heavily by Mary Quant in its simple form created a sensation as it climbed daringly up the legs of fashionable ladies. The midi of the 70s along with the maxi brought the dress hemlines to more respectable lengths and turned them into causal fun offering. In the 80’s the body was the centre of attraction so designer Azzedine Alaia’s body con dresses were a rage. So the dresses and their hemlines have moved from the ankles to the calves, knees and thighs with the greatest of ease.

In the 21st century the dress may not look quite like the one in the last century, since designers have not let their creativity run riot on the fashion charts and it is quite rare to find a dress in the conventional silhouette. For Spring/Summer 2020, designers at the Lotus Makeup India Fashion Week in New Delhi gave multiple options to the fashion followers who want to add stylish excitement to their wardrobe of dresses. 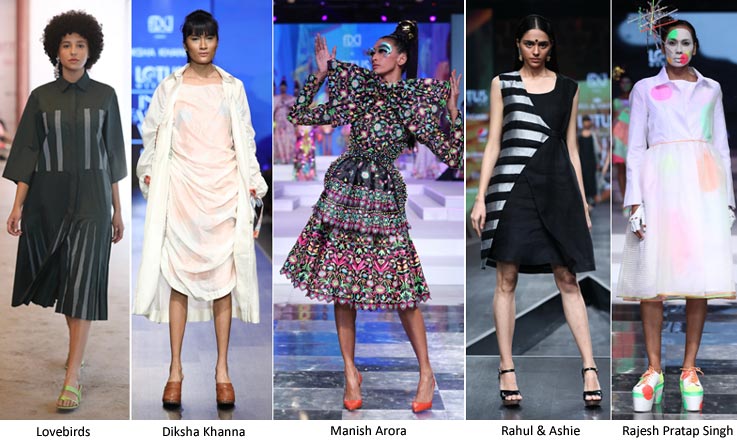 Now this is a somewhat conventional length for the dress but it is the treatment given to the silhouette that makes news.

Designer Disha Khanna’s “Pine Breeze” collection sees her dress as a front multi cowled look in white with a matching white robe. The Lovebirds label wants ladies to look stylishly conventional in a pleated tent dress designed with shades of light and dark grey. Avant Garde and totally off-the-beaten path is designer Manish Arora who feels the belted long-sleeved, intricately, embellished dress with a giant pussy bow at the neck will not only stop conversation but even traffic.

Designer duo Rahul and Ashie shows “Hues of Spring” a look that could be called sober when their double-breasted horizontal striped dress is combined with stark black. Rajesh Pratap Singh unveils his minimalist look with long- sleeved, layered, white, shirt-collar dress with a splash of colour. 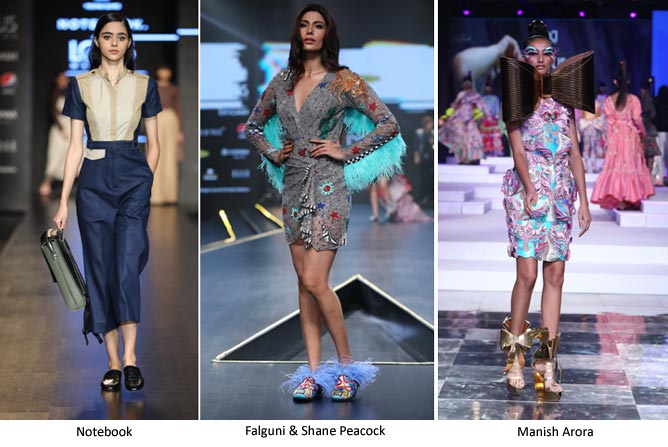 A woman with a great body loves to show it and designers are there to give the right touches.

When one talks of designers Falguni and Shane Peacock it is not the length of the dress that matters but the silhouette and it always accentuates the wearer’s curves. So a draped, grey, clinging mini with abstract embroidery along with the designing duo’s characteristic feathers on the sleeves and shoulders will surely make a fashionable impact. Manish Arora too feels body contours need to be emphasised so his 3D embroidered mini with an oversized bow tie at the neck will surely get all the eyes on it. The Notebook label is slightly conservative for the workingwomen’s wardrobe. The navy sheath dress with beige bib inset is a practical offering. 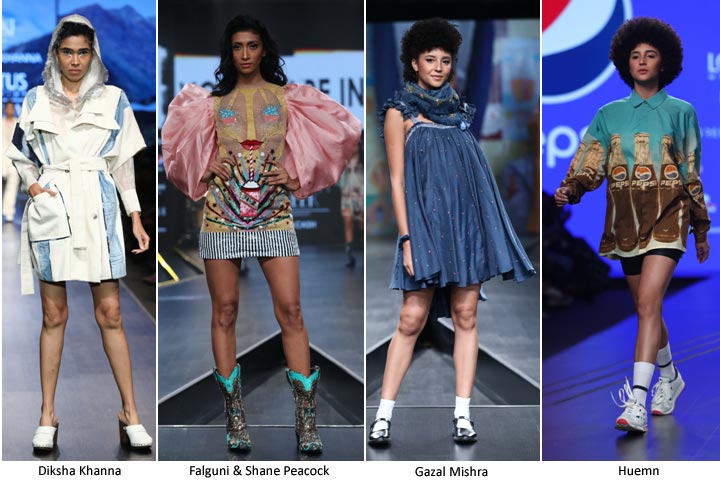 The mini is not just the 20th century sack dress any more. For 2020, the mini makes a lot of noise as Diksha Khanna creates a trench coat dress with giant pockets. The mini could also be a favourite offering from Falguni and Shane Peacock as it appears with stripes, funky embroidery and giant, ballooning, pink sleeves. A navy blue flared baby doll strappy tent looks cute and just right for the teen look by Gazal Mishra. The Huemn label brings an extended long-sleeved printed shirt look; while a long white textured robe balances Nidhika Shakhar’s white mini with the red bull’s eye. 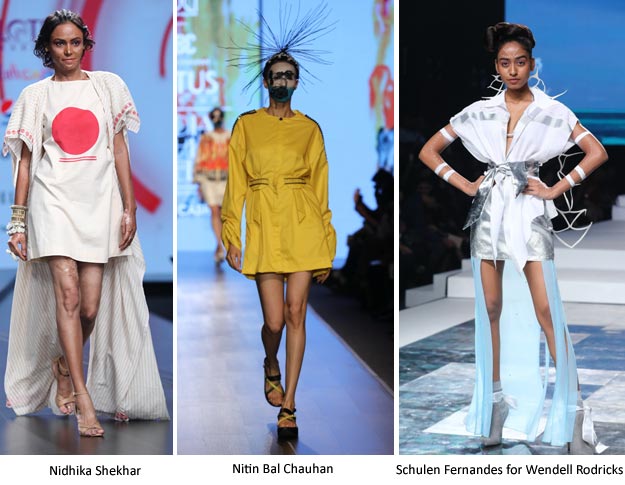 Nitin Bal Chauhan’s presentation “The Gatekeeper” may shock viewers but his yellow long-sleeved, belted mini has a marked sober touch with shoulder detailing. White and silver with touches of blue from “The Zentangle” collection by Schulen Fernandes for Wendell Rodricks reveals a white draped bodice with silver mini skirt, which flaunts blue floor kissing trains for a show stopping entry. Designers Shivan and Narresh for “The Seoul Series” collection have a bubbled puffer long-sleeved coatdress in metallic silver, red and black that will strike the right fashion notes. Yogita Kadam’s “Pranay-Ra” collection features a sea green, mirror work mini that is for the bold and adventurous dresser who wants to create a stir at the grand soirée. 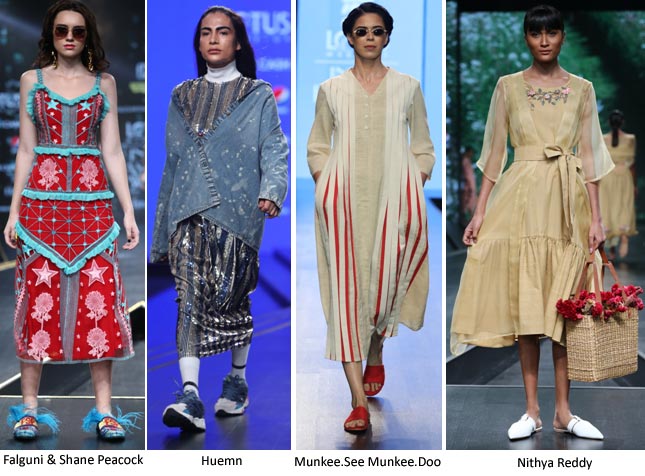 The midi is a modest but stylish look at dresses. Designer duo Falguni and Shane Peacock’s midi is an exotic look with embroidery and layering with jersey and tulle in red and sky blue. The Huemn label brings a denim jacket over a glitzy midi for a trendy funky treatment given to the 70’s favourite. The Munkee.See Munkee.Doo brand keeps it stylishly simple with an ivory, pleated dress with red insets. Nithya Reddy’s “Fiona Tales” is a feminine, pale, beige, organza, tiered, belted dress that has a retro feel about it, while Pratima Pandey’s Pramaa label unveiled the “Quwa” collection that goes for an ombré, white and navy flowing sleeves creation with bouquets of embroidered flowers. 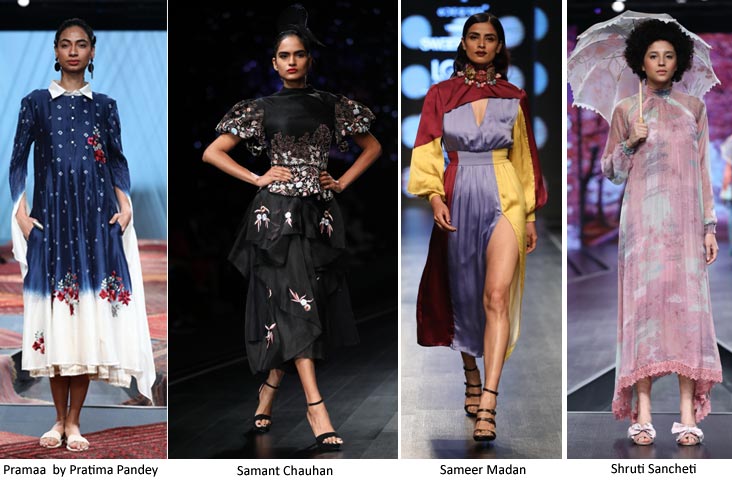 Drama comes in the form of a black, draped, embroidered midi from Samant Chauhan. Sameer Madan’s “Time Capsule” midi is all about eye-catching looks with long-sleeves, colour blocking and a hip high slit for a sexy touch. Shruti Sancheti’s “Blossoms” offering is a sheer, pastel, printed tube with a lace-edged hemline and full sleeves that are demure; evoking visions of the prim and proper Victorian look. 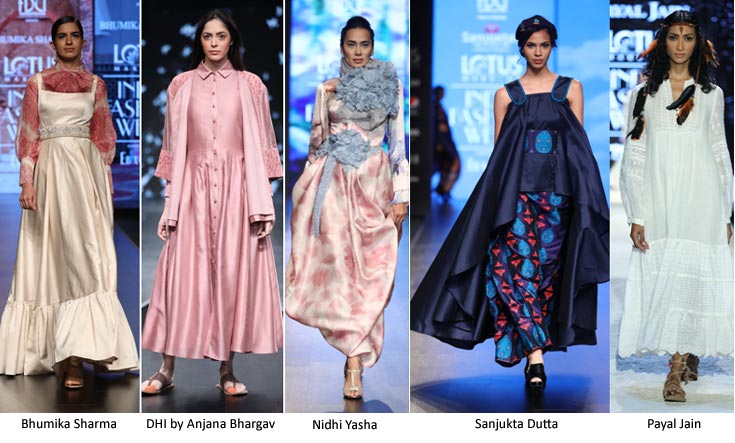 Nothing is a more welcome sight than a well-designed maxi dress and designers lavish their creativity on them since they are great sellers but they tweak the look for 2020.

The “Nejma” collection by Bhumika Sharma has am ivory satin pinafore with a lush, flouncy hemline that is worn with a sheer long-sleeved, printed blouse with a pussy bow at the neck.

The DHI by Anjana Bhargav brand offers a simple retro look for a front-open, pink maxi teamed with an embellished matching jacket. “A Pathway to Monet” by Nidhi Yasha unveils an asymmetric draped version with an abundance of blue ruffles at the neck and waist that evokes a feminine old world charm. Nothing looks more ethereal and pristine than an embroidered, long-sleeved, white, maxi by Payal Jain from her “Crescent Moon” collection that will surely fly off the racks. Sari designer Sanjukta Dutta’s version is a printed and plain look in navy blue silk layered to give the maxi a formal touch.