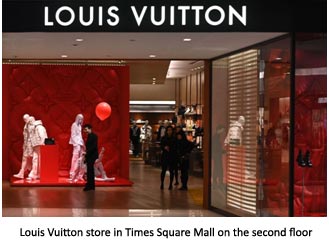 The long-drawn protests in Hong Kong are affecting retail operations, particularly of the businesses that depended on the big-ticket buyers from China. Hong Kong is the major hub for luxury brands, which cost a lot less here, Hong Kong being a free port without customs tariffs on imported goods. Louis Vuitton, which has eight stores in Hong Kong, is shutting down its store located on the second floor of Times Square mall in the shopping district of Causeway Bay. Reportedly, the brand has plans to open the ninth store at Hong Kong International Airport in 2021. The reason for the shutting down of the store was attributed to the mall’s owner, Wharf Real Estate Investment Corporation (Wharf Reic), refusing to lower the rent of HK$5 million (US$642,000) per month, for its prime second-floor space for Louis Vuitton store. One of the Louis Vuitton stores is just a short walk away in Lee Gardens Mall.The rentals in Hong Kong in prime locations is particularly high, and the reduced sales is causing some pain for the brands. 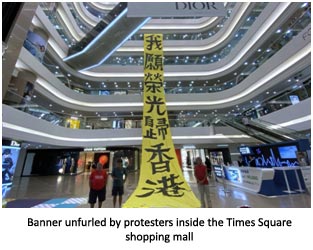 The seven month long protests, which have been widely reported for having turned sporadically violent even, have resulted in a significant drop in tourist traffic to the city. The strong anti-China stance and the physical attacks on Mandarin Chinese, is keeping the shoppers from mainland China away. As per reports from the Hong Kong Tourism Boards, there has been a 56% decline in visitor traffic until November 2019 over the year. The retails sales overall have dipped by 23.6%. The third quarter sales ended September 2019, for brands like Gucci and Salvatore Ferragamo is reportedly down by 45%, while LVMH reported a 25% decline for the same period. The Chinese shoppers are playing safe and shopping in mainland China for luxury products.