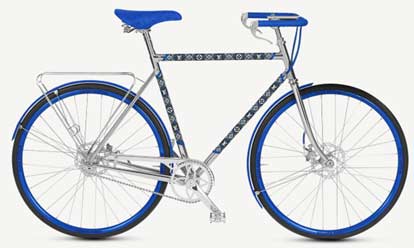 Bicycles are all the rage. It is très chic to push the pedal and do one’s bit for clean air and sustainability, especially atop the latest Louis Vuitton’s LV Bike.  Spotting a demand, Louis Vuitton has partnered with the 100 year old French bicycle maker Maison Tamboite, for bespoke cycles that are made to measure, according to the individual’s height, weight, foot size and more.

The century old Maison Tamboite, which opened  its first store in 1912 in Rue Dulong in Paris,offers a mix of track bikes and Parisian porteurs, selling 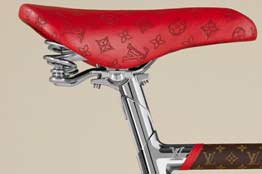 customised, handmade bicycles, made using steel, leather and wood. Each bicycle is crafted with precision, and extra attention to detail. Historically, they are known for their made to order, handmade bikes. With  master craftsman Hugo Canivenc in charge, Maison Tamboite busines saw a revival in the past decades, and now with the marriage with Louis Vuitton, it is on top of its game as the only bike of its kind. 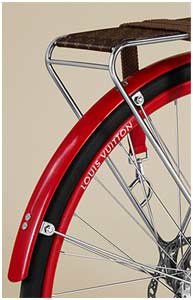 The LV Bike is further enhanced in the charecteristic Louis Vhitton signature style, with the LV monogram on the brown leather covering, the wheels and frame, the monogram Flowers shape on the plates or the LV logo stamped on the pedals. The bikes are available in two different models. The first has a basket in front, while the second has a diamond painting on the back. Additionally it has LED lighting, tracker, shock absorbers under the seat, airless tires.

The LV Bike is available in many variations according to requirement, such as a step-through or closed frame with a two-speed drivetrain, and a choice of  four colour ways – Monogram with red Louis Vuitton perforated Mahina leather, “Lime Yellow, “Damier Graphite” with black, gray, and yellow details, and a special Nicolas Ghesquière-designed “Since 1854” Monogram.The buyer can also have their initials engraved on a leather patch that will be placed on the rear wheel.