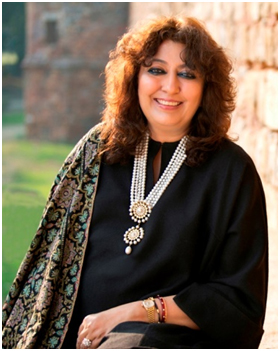 Not for nothing Madhu Jain’s name invokes respect. Bestowed with lofty titles such as the “Ikat Queen of India” or the “First Lady of Ikat”, Madhu has held dozens of exhibitions and shows in India and globally. She has stayed true to her love for natural fabrics and textiles, creating magic with the traditional weaves of India, and winning awards along the way, such as the FICCI FLO award for Excellence in the field of Creative Arts in 2009.

Among her many achievements was also the moment in 1997, when Madhu’s Nakshi Kantha and Dhaka Muslin Craft collections were showcased at the Miss world Pageant. In 2009 she was the official Style and Design partner promoting the traditional sari at the Miss India World Wide Contest

On the opening day of Amazon India Fashion Week Autumn/Winter 2017 on 15th March, 2017,Madhu Jain presented a spectacular visual story of India’s rich textile heritage. Her 22-piece retrospective collection opened with a black, white, red Uzbekistan inspired ikat sari, and then moved onto a dramatic kurta with fluid pants.The black and white saris on the ramp, along with multi-coloured Patoladupattas was just the beginning of her fab showcase. The handloom saris with Devnagiri script borders and shimmering sequin palavs – some with the ancient print motifs were her old masterpieces, which she sourced from the private collection of her clients. The gold, black, red brocade Sherwani was regal, while the playful Warli prints on saris and the glitzy embroidered kurtas with matching potli bags and dazzling dupattas were eye-catching entries. The Thai weft style of Matmi or Mudmeeikat was innovatively blended with the Odisha or Andhra ikat.

The one person truly qualified to assess Madhu Jain’s show and ask her questions is another Diva who is a star in her own right, Meher Castelino. In an exclusive for The Luxury Chronicle, Meher talked to Madhu Jain about her work and journey. 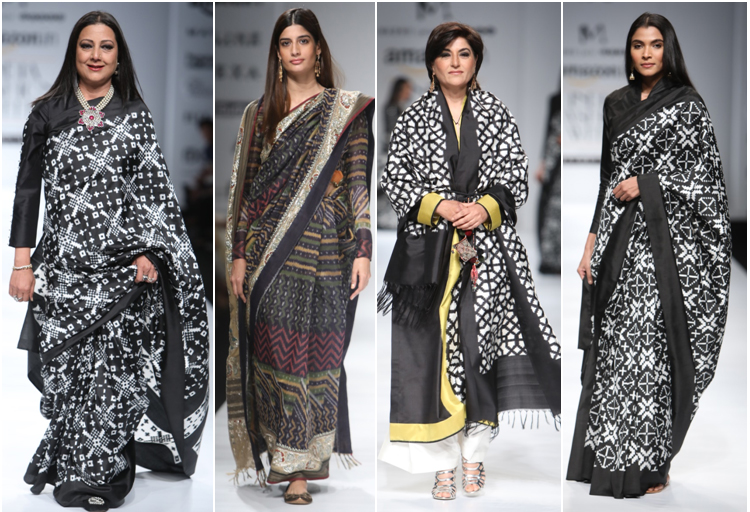 When did you start designing fabrics and garments?

In 1987 my label was born after marriage and two kids. It was designer Tarun Tahiliani who pushed me into the world of fashion. He saw my textiles and insisted I retail from his store Ensemble, which was one of the trend setting stores that started in 1987. That is how I landed up in the fashion business.

Why did you pick ikat as your medium for designing?

I love ikat since it is one of the most ancient weaving techniques seen around the world in Central Asia, South East Asia, Africa, Japan, Central and South America. In India ikat is a specialty of Odisha, Andhra Pradesh, Telegana and Gujarat. 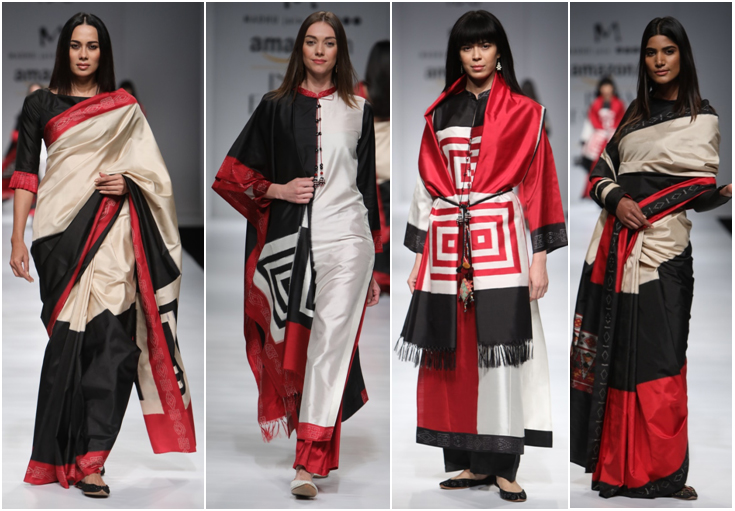 Why did you pick ikat as your medium for designing?

I love ikat since it is one of the most ancient weaving techniques seen around the world in Central Asia, South East Asia, Africa, Japan, Central and South America. In India ikat is a specialty of Odisha, Andhra Pradesh, Telegana and Gujarat.

You showed at Amazon India Fashion Week Autumn/Winter 2017 after 30 years why such a long gap?

I had shows regularly ever since I started in 1987 all over the country and world but I was doing a lot of R&D and promoting Indian textiles in India, USA and working on special projects with the Indian and state Governments.

What are the challenges when you started in 1987?

The challenges were creating a new textile from scratch and the research that goes into it. I work with my master weaver to create the initial samples. The production process is quite long but the final prototype has to be perfect. After the material has been perfected it comes to my design studio where I design the outfit, which is created to match the beauty of the fabric so that both are highlighted in the final result. 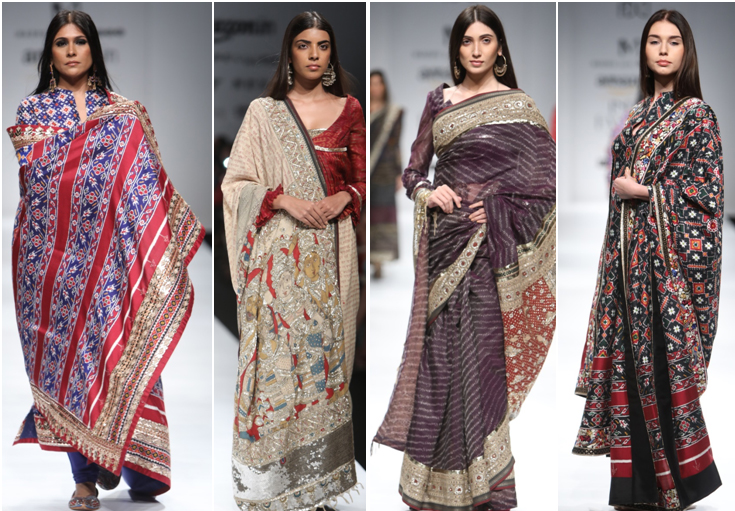 My first collection was created after months of research. I had combined the Kalakshetra weave of Tamil Nadu with the Baluchari weave from Bishupur in West Bengal. I displayed it in Ensemble Mumbai and Ogaan Delhi, where it was a hot seller.

Besides ikat what are the other weaves you have presented?

I have worked with many weaves. I introduced Bamboo Fabric in 2003 in the country and displayed garments at the 7th Bamboo Congress in 2004. I have woven Bamboo with Khadi, Chanderi and Wool. I reworked the Srikalahasti Kalamkari motifs on special cotton with origami colours. I created a 115 ft. bamboo fibre and Kalamkari installation for the opening ceremony of the 2010 Commonwealth Games in the “Fabric of India” section. I have enjoyed working with Mekhla Chaddar from Assam and Uppada from Andhra Pradesh.

You made a big splash last year with your Uzbekistan inspired ikats. Pleases share some information about it.

My Uzbekistan inspired ikats in 2016 were a blend of two cultures. My collection also had a retrospective of Odisha and Andhra Pradesh Ikat, in which there was Buddhist Mandala designs from textile traditions of Thailand. I created 105 pieces in the collection. 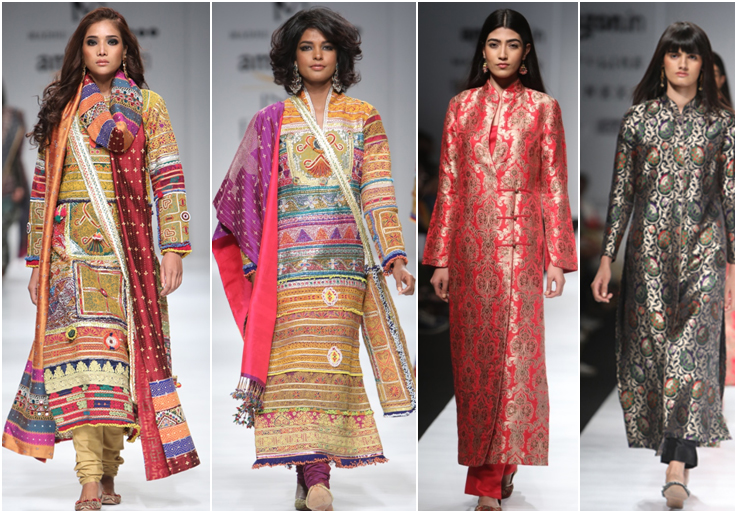 How long did the collection take to create?

I spent over a year on the road working on R&D and then another year perfecting the ikat from Uzbekistan and India.

How many weavers do you work with on your projects?

I have worked with nearly 300 weavers, 500 craftsmen and 200 hand embroiderers in the past 30 years for different projects.

What is the price range of your textiles and garments?

The prices range from Rs 8,500 to Rs 45,000 but the customized pieces cost differently since they are specially created. It takes nearly a year to weave a double ikat sari and a lot depends on the design and the number of weavers who do the work.

Do you make more than one piece or are they exclusive?

I don’t mass-produce but only make limited edition pieces.

What is the future of the ikat weave and other traditional textiles?

Constant innovation is needed to safe guard our traditional weaves. More investments are needed in the handloom and Khadi section. I have worked with Government programmes and would like to work more so that fresh inputs are added to the traditional weaves. 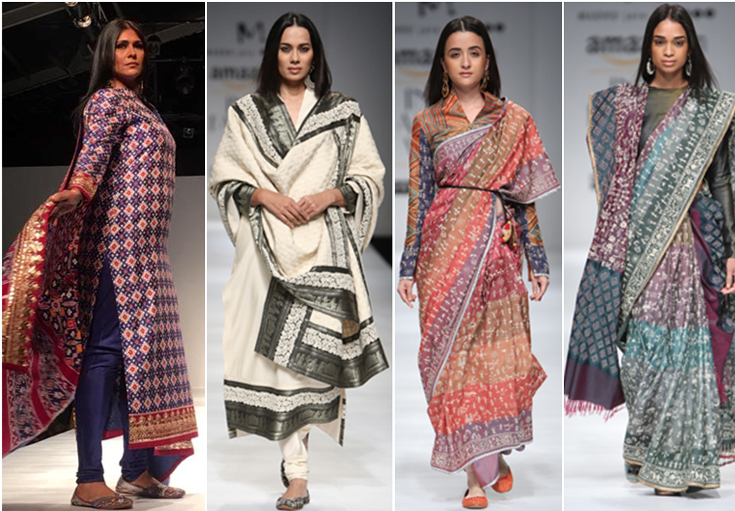 Your designs for your garments are very basic with hardly any innovations, any reason for that?

Since I am a textile designer I ensure that the textiles are in focus even for my garments and hence I keep the styling very basic so that the beauty of the fabrics comes through.

Which have been your most memorable shows and events in India and abroad?

There were many shows and events that made an impact and are close to my heart. In 1996 I revived the folk art of Nakshi Kantha with BRAC (Bangladesh) one of the largest NGOs in the world. I also reintroduced the legendary Dhaka Muslin, which had disappeared from India after partition. In 2003 I had the opportunity of showcasing Kalamkari collection at the Singapore Fashion Week. The Kashmir Project in 2005 for the J & K government was to restore employment lifelines for the local artisans. The Kashmiri handicrafts were displayed at the Metropolitan Museum, New York, Museum of Arts and Design, American Museum of Natural History and Rubin Museum of Art. In the same year I published a book “The Living Art and Craft Tradition of Jammu and Kashmir” that charts the history of the State’s Crafts. In 2011 I had the honour of restoring a rare Khadi sari woven in prison in 1941 by Pandit Jawarharlal Nehru.