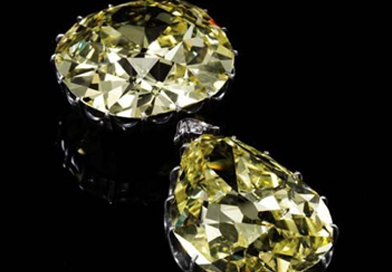 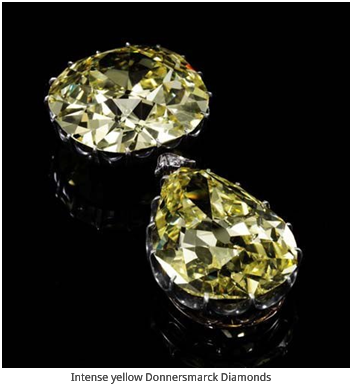 Before the onset of winter last year in 2017, around mid-November, Sotheby’s Geneva held an auction of ‘Magnificent Jewels & Noble Jewels’. Sold at this auction were some very famous and iconic coloured sparklers – a pair of extraordinary intense yellow Donner smarck Diamonds, (a 102.54 carats cushion-shaped diamond, and  82.47 carats pear-shaped diamond); and ‘The Raj Pink’, the world’s largest known fancy Intense Pink diamond, weighing 37.30 carat.A few months earlier in Hong Kong, another flawless 59.60-carat pink diamond, ‘Pink Star’was auctioned for $71.2 million. It is the unusual coloured diamond, of a good size, is most coveted and fetches the biggest prizes.

Throughout history, diamonds have always been the proud centerpieces of any collection of jewellery, as symbols of class and distinction, set in crowns and tiaras of Royalty, who coveted them as spoils of waror paid huge amounts to acquire them. A thousand heists plotted for these glorious stones, which have been retold in movies and novels. The exaggerated tales of romance and tragedy and curses lends the allure to these priceless baubles. 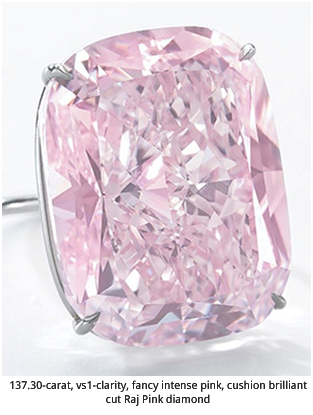 Why are natural coloured diamonds more expensive and sought after than their white cousins? Because they are so rare in occurrence, that only 0.0001% of the entire world’s diamonds is natural coloured diamonds. An expert can tell from looking at a diamond, which mine in the world dug it up. For instance, 90% of world’s pink diamonds are mind from Argyle in Western Australia. The orange, green and blue diamonds are mostly found in mines in Africa. Borneo and Brazilian mines have produced yellow and brown diamonds. The famous blue Hope diamond and Wittelsbach-Graff Diamond were mined from central India’s Golkonda region. The vivid Zimmi Yellow Diamonds

are from Sierra Leon’s Zimmi mines. These are very rare with a strong saturation that does not resemble any other yellow diamond, and cost nearly two times more. It is in the famous Premier mine, later rechristened the Cullinanmine in South Africa, which has given some very famous diamonds, such as the five Cullinan diamonds. The 530.20 carats Star of Africa or the Cullinan 1, placed in King Edward Sovereign’s Royal Scepter as part of the Crown Jewels. The 317.40 carat Cullinan II is mounted in the band of the Imperial State Crown, 94.40 carats Cullinan III is set in Queen Mary’s Crown and can be worn with the IV as a pendant-brooch. The triangular-pear cut 18.80 carats Cullinan V is modified to fit in the crown of Queen Mary as a replacement for the Koh-i-Noor, which was taken away for Queen Elizabeth’s crown. One can see it in the Tower of London museum.

Rare and priceless as these diamonds are, , it is the real or imaginary stories that surround them that enhance their legendry values. Here are some famous ones. 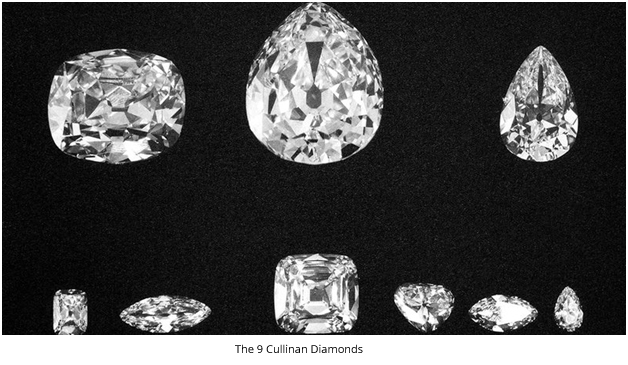 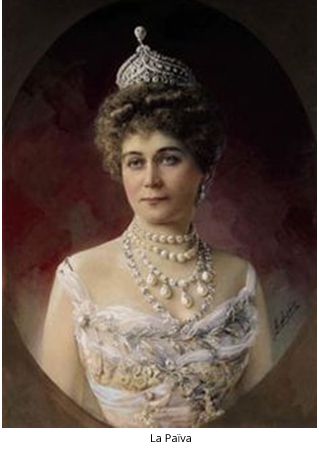 The Donner smarck Diamonds were part of the collection of La Païva, Countess Henckel von Donnersmarck (1819-1884), arguably the most famous of 19th-century French courtesans, who rapidly outgrew her modest life in native Russia as Esther Lachman, to become the toast of European aristocracy. Her love life and story is the stuff for a novel and a feature film. Esther arrived in Paris at the tender age of 18 and latched on to noted pianist Henri Herz. Soon, she was hobnobbing with the most notable names of the era – Richard Wagner, Hans von Bülow, Théophile Gautier and Emile de Girardin. Clever marriages and social machinations ensured that she would become a soi-disant Portuguese marchioness as well as a Prussian countess – one of the richest, independent women in Paris.

Our Esther Lachman married Marquis Albino Francisco de Araújo de Païva of Portugal for a single day, but retained the title La Païva. Next, she married Count Guido Henckel von Donner smarck (1830-1916), who indulged her with fine jewels. However, after her death in 1884, the Count remarried but La Païva’s jewellery collection remained in the family for 100 years until Sotheby’s auction in 2007. Since, the Donner smarck diamonds have changed hands again. 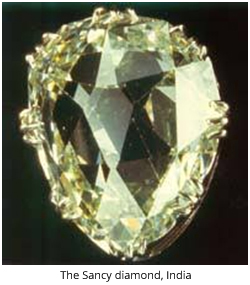 Many of the famous historical diamonds have traveled across continents, coveted, acquired, and requisitioned by means fair or foul, wrapped in shades of greed, treachery, murder. Belying their ‘cursed diamonds’ stature, they are now resting in museums. The Sancy diamond, said to be of Indian origin, adorned the cap of King Henry III and remained with many generations of English royalty, until Henry IV tried to use it to finance his new army. His trusted messenger wound up dead, with the diamond in his belly. After being tossed around between the English and French, it is now housed in theApollo Gallery, at the Louvre Museum in Paris.

Also resting in Louvre is the famous pale blue 140.64-carat Regent Diamond from Golconda mine in India. A bloody tale of stealth and treachery later, it was mounted on Napoleon’s sword. The Regent Diamond was stolen in 1792, along with the Crown Jewels of France. Within a few years, by 1801 Napoleon got it back. His second wife, an Arch Duchess of Austria, took the Regent to Austria after Napoleon’s death. Now it is back in the Louvre.

Amongst the French Crown Jewels that were stolen in 1792, was also the 20 carat flawed Hortensia Diamond, named for Hortense, the daughter of Napoleon’s stepchild, the Empress Josephine. The Hortensia , with a pale coral cast, has a crack along its pavilion. It was recovered and stolen again in 1830, and again recovered. It’s deep association with French history and Napoleonic legend makes it priceless and finds it a spot in the Louvre.

The rare, flawless, 41 carats Dresden Green Diamond, said to be from the Kollur mine in Andhra Pradesh in India, is named after Dresden, the capital of the German state of Saxony, where it has been on display for most of the last two centuries. Today, the diamond is shown in the New Green Vault at Dresden Castle. Another famous diamond from India, the big blue Hope Diamond, has an intricate history of passing hands with smugglers, merchants, royals, thieves, commoners. Owned by Louis XIV, the King of France, and by the next King of France, Louis XV, it was stolen during the French Revolution, and it did not surface again for 20 years until 1812, reappearing in England to be purchased by Philip Henry Hope, who gave it its name. After being sold, bought, auctioned repeatedly, it was finally bought by Harry Winston who has donated it to the Smithsonian Museum.

While globally, there is a growing trend for coloured diamonds, within India, which has produced some of the most famous and largest diamonds of colour, the story is something else. Coloured diamonds have no appeal to an Indian buyer. Traditional jewellers do not use them in their fancy settings. We spoke to two jewellery houses, the over 100 year old Karnataka based jewellery brand Ganjam, and the new first generation Delhi jewellery brand Sunar.

Valli Krishnama, Senior designer at Ganjam said, “People in India still prefer buying white diamonds more for investment and knowing there is always a resale value ,adds comfort in the buyer.” She further added, “We at Ganjam work with white diamonds, exceptional in quality, color and cut. There is occasional use of yellows and champagne color fancy diamonds . The demand for pinks and other color fancies are not too high due to the rarity and value. Value of these fancy colors plays a huge role in today’s market.”

Praveen Goel, CMD Sunar Jewels affirms the fact that the colour diamonds are not popular in India. He said, “There is a lack of transparency in the market on the prices of coloured stones.This doesn’t give too much of a window for investors to study the prices. Also, the supply is not as prolific as colourless diamonds. Our customers mostly ask for colourless diamonds. We have used yellow diamonds in our jewellery.”