There’s no denying 2020 is shaping up as an extraordinarily tough year. Ongoing drought led to bushfires and reduced visitor numbers that Gippsland tourist towns rely upon, only to be swiftly followed by COVID-19 travel restrictions. However, one Gippsland town is sure to emerge stronger, with a vibrant show of their local history and culture that will welcome visitors when they can return.

The community of Yarram has proudly unveiled the last of 12 murals which have transformed the once blank walls of the town into vibrant displays honouring those who made their mark in the history of this region, and those who continue to shape the town today.The murals were painted by world-renowned street and silo artist Heesco Khosnaran over a five-week period in March 2020.The project, also known as ‘HEESCOTOWN,’ was the brainchild of local Yarram resident Eric Greenaway and has been coordinated and documented by film-makers and owners of The Bull Bar, Anne & Wayne Tindall.

Yarram is a picturesque town of just over 2,000 people, two and a half hours drive southeast of Melbourne. It is the ideal base from which to explore the cool temperate rainforest of Tarra Bulga National Park, the historic fishing village of Port Albert, the highest single span falls in Victoria, Agnes Falls, and the start of the world’s second-longest uninterrupted beach, the 90 Mile Beach 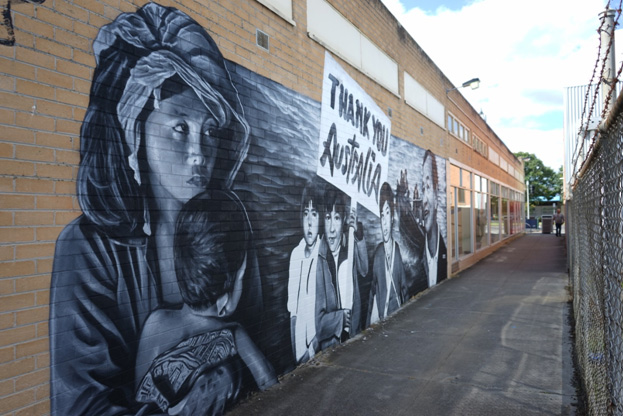 LIEM settled in Yarram in 1983 as a refugee after the war from Vietnam. He has never forgotten the welcome he received from the then Fraser Government as a boat person fleeing persecution. He remembers vividly the warm welcome into Australia, people with open arms.

“All this time I have worked hard and have been trying to figure out how I can every say thank you in a public way to Australia for taking me in. When Wayne asked me if I would get involved with a painting on the wall of my business, I thought, this is my chance to say thank you Australia. That’s all I wanted. To say thank you.” – Liem, bakery owner. 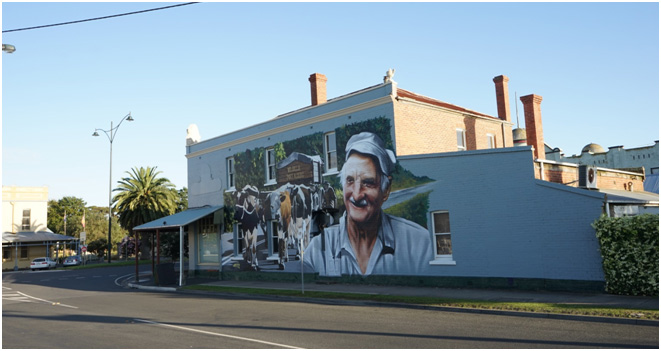 The Federal Coffee Palace has a unique place in the history of Yarram and is highly visible as you come into town from the South. Ralph was the obvious choice to adorn the wall, he was an enormous character and represents the early settlers that made this area what it is today.Ralph was a Bullocky back in the day…he died about 10 years ago. He lived up in Binginwarri and was known and loved by many in the area…. A traditional old timer.

This mural reflects a transition in the history of this store – which is about to enter a new chapter of life as ‘The Bean Pedlar,’ importing and roasting coffee beans from all over the world.

On the right-hand side of the Heesco artwork is Victor Hugo Mattern, one of the sons of Franz Peter Mattern who established the original hardware store in 1887.

The other side of the mural shows new owner Robert Drakeford along with his parents dog, a coffee field and coffee beans. In a show of hope, they can’t wait to open ‘The Bean Pedlar’ and hope it will be a new cultural meeting place that conjures memories like Robert had growing up in Yarram as a child. 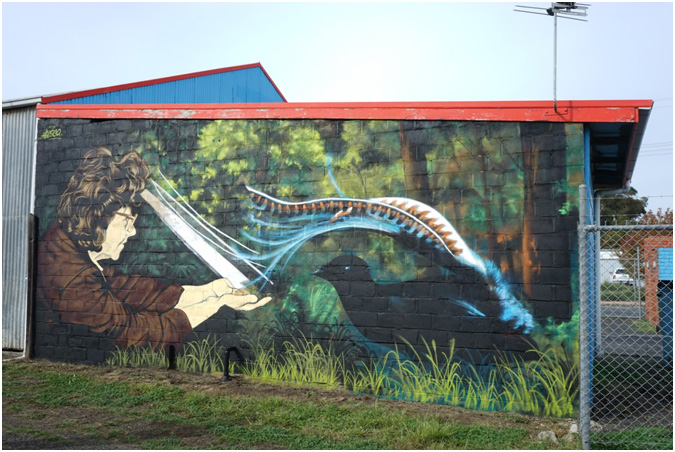 Kara came to the Park in 1949 and after the death of her husband Jim, she became the first female park ranger in Victoria in 1952. As well as being the Park caretaker Mrs Healey collected an impressive range of specimens from the Park and sending them to places like the CSIRO and The National Museum of Victoria.

The image of the lyrebird is a reminder that the National Park is a home to many native animals. One of the most popular is the Lyrebird and many visitors are lucky enough to see one on the walking trails that intersect the Park. 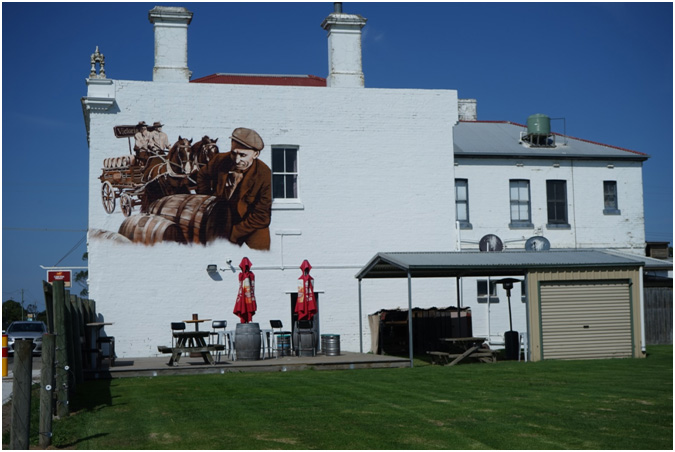 Brendan and Michelle Farley, owners of the 1891 hotel shared their involvement. “We heard about what was happening in Yarram and watched a video about Heesco and his work with local artist Wayne Tindall owner of the Yarram Bull Bar and thought it would really be a good thing to give something back to the community. We made contact thinking we were too late as the project was already beginning, but Wayne And Eric Greenaway came straight down, and it just went from there.

After an initial conversation with Wayne, we decided on a heritage image that was not too bright but one that would stand out boldly and be seen clearly from the South Gippsland Highway. It had to be a period image & of course hotel related, hence us picking a gentleman unloading old kegs by hand. Wayne designed the image for us and mocked it up on our wall. We loved it straight away.”

BULL BAR & GALLERY – INSIDE AND OUTSIDE 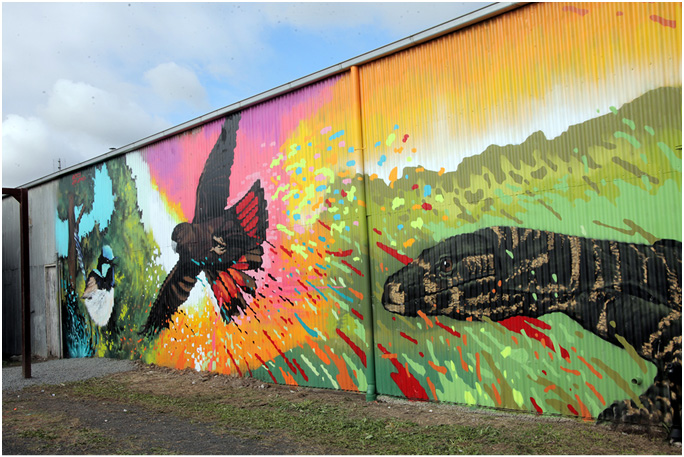 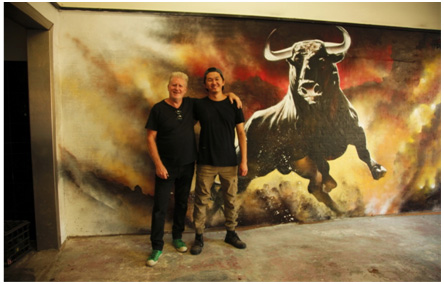 Building & Bar Owners Wayne & Anne Tindall ran a successful film production company in Melbourne for 30 years. They sold it and moved into Windsor where Anne opened a small gallery and lived above the gallery and Wayne had his art studio in the complex.Anne suggested one day that a better gallery wall space might be the long empty walls that ran down the alleyway. Wayne completed three paintings and invited a bunch of well-known Melbourne street artists to take it forward. He met HeescoKhosnaran.

Stonnington Council eventually came on board with the Laneway Project giving Wayne several grants to complete the huge task. They even named the Laneway “Artists Lane” and each year a Laneway festival was held. The last festival attracted more than 5000 people. It is featured in the Lonely Planet publications.