In keeping with its tradition of curating unique and enriching experiences for its patrons as a purveyor of art, culture and heritage, The Taj Mahal Hotel, New Delhi hosted an exclusive musical evening, ‘Soul Strings’, which was a musical collaboration of the East and West, with Sarod prodigies Amaan & Ayaan Ali Khan and the acclaimed Elmira Darvarova, Grammy-nominated Concert Violinist from New York.

The elegant Garden Terrace was the venue where the three musicians regaled the audience with their mastery over their instruments, and their respective musical traditions. Elmira Darvarova, who is a former Concertmaster of the Metropolitan Opera Orchestra (and the first woman-concertmaster in the MET’s history) set the tone with her rendering. Amaan & Ayaan Ali Khan went on to play composition set to Raag Yaman and Raag Pilu, a jugalbandi of sorts with Elmira on the violin. 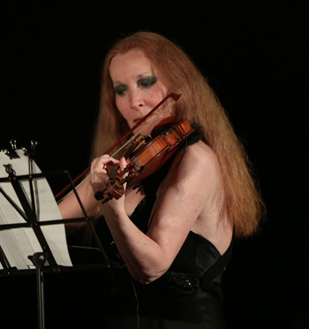 Expanding on the collaboration, Elmira Darvarova said, “The concept of this collaboration (which began with a live performance at Symphony Space in New York in February 2015) is to interpret the works of Maestro Amjad Ali Khan’s singing and playing through the prism of a unique joint performance, in which the artists have aimed to preserve the essence of both Indian and Western traditions so that they are able to partake of each other without artistic compromise. Their goal through this process is to engage and celebrate both the shared and discrete musical “DNA” of both traditions from a perspective of abundance. This is a blissful dream of a project, infused with the unique amalgamated contributions of artists united under a common aegis, regardless of their diverse background, cultures, traditions, generations, genders, religions, upbringing, and career paths.” 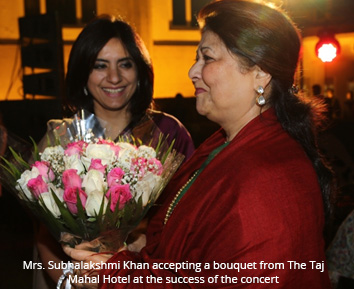 Further elaborating about his association with Elmira, Ayaan Ali Khan said, “Our journey started last year. The concert will give the audience a glimpse of our album “Soul Strings”. We have grown with each other’s music and have developed a comfort level because it’s very easy to connect to the person you are performing with on the stage. We will be sharing each other’s traditions and treasures.”

The presence of a power-packed audience such as Mrs. Subhalakshmi Khan, Suhel Seth, Jatin Kochhar, Sanjay Sharma and many others made the evening a grand success.

Speaking on the association with The Taj Mahal Hotel, Delhi, sarod maestro Amaan Ali Khan said, “I have very fond memories at The Taj Mahal, New Delhi & the Taj Group. Ayaan and I have performed with our father, Ustaad Amjad Ali Khan at the hotel. The Taj Group has become a symbol of excellence and grace all over world. Their commitment to detail and their elegance in whatever they do makes them the iconic brand that they are. This collaboration is very dear to my heart and we are honored to be back in the hotel along with the very talented Elmira Darvarova who is an artiste of very high repute. We will be playing some tracks from ‘Soul Strings’ and some new tracks will also be there. It’s going to be extremely collective. It’s very unusual for us to collaborate as we represent Indian Classical music and she Western. To come to a meeting point and mixing both the traditions together is something which has always intrigued us!” 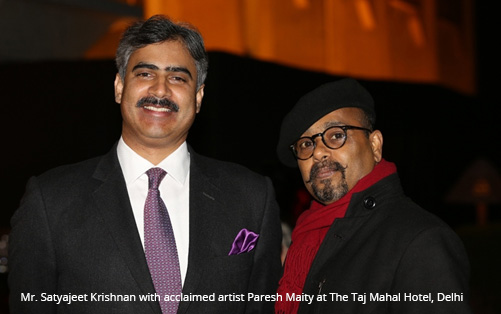 Speaking on the occasion, Mr. Satyajeet Krishan, General Manager, The Taj Mahal Hotel, New Delhi said, “We are honored to welcome back sarod maestros Amaan and Ayaan Ali Khan along with the brilliant Elmira Daravarova at The Taj Mahal Hotel. It is always a great pleasure to host musical geniuses and this magnificent evening will definitely be an experience to cherish for a lifetime!”

The Taj Mahal Hotel on Number One Mansingh Road, New Delhi is one of the most distinguished addresses in the national capital. Its proximity to the seat of government, the city’s diplomatic corps and business district has furthered The Taj Mahal Hotel’s reputation as the epicenter of the Delhi. Graceful architecture blends aesthetically with modern facilities. Indeed, it is a tribute to hospitality and service, complementing the broad boulevards and leafy splendor of Delhi’s chief architect, Sir Edwin Lutyens.