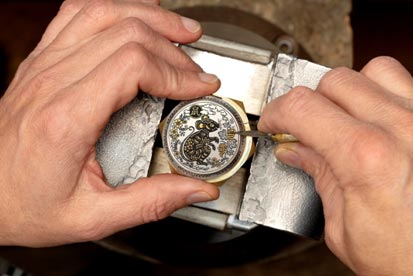 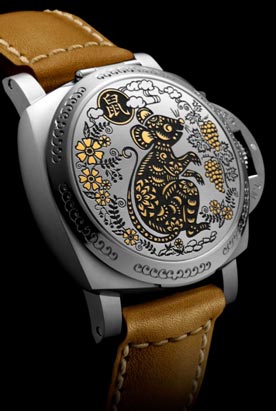 The luxury Italian watch manufacturer Officine Panerai, which is headquartered in Geneva and manufactures watches in Neuchâtel, Switzerland, is celebrating the Chinese Year of the Rat with a special edition of 88 units decorated using the ancient technique of sparsello. Chinese astrological tradition depicted and enhanced by Italian craftsmanship. Panerai recalls the evocative thousand-year tradition of the Chinese Zodiac with the new Luminor Sealand – 44 mm (PAM00863), a special edition created to anticipate and accompany the Year of the Rat which will officially start on the 25th of January 2020. For Panerai this is a true tradition within a tradition, which started in 2009 with the celebration of the Year of the Ox and culminating today, in the 12th year, with the Luminor Sealand – 44 mm dedicated to the Year of the Rat.This is the 12th Panerai Luminor Sealand model and marks the end of the 12- year cycle in which each year is distinguished by a sign of the zodiac represented by an animal.

Both ambitious and brilliant, those born under this sign use their intelligence and shrewdness to adapt to any situation, easily overcoming the problems and pitfalls of everyday life. They are also endowed with inspiration and intelligence, qualities which they share with the rat, the animal represented on the steel cover of the Luminor Sea land – 44 mm dedicated to it.

A distinguishing feature of every Seal and, the decorated cover – with a signaling mirror inside – is hinged at 12 o’clock on the brush-finished AISI 316L steel case of the 44-mm model. This aesthetic and functional element protects the grey dial with its printed Arabic numerals and linear hour-markers, supplemented by luminous Super Lumi Nova TM dots.

The decoration of the cover has been engraved by hand by Italian master craftsmen using the ancient art of sparsello. This technique is named after the tool, like a little scalpel, which is used to make incisions. These are then inlayed with gold threads which are carefully hammered to fill the recesses. This operation takes up to 50 hours of work for each watch.

The mechanical movement of the new Luminor Sealand – 44 mm is the P. 9010 Calibre with a power reserve of three days provided by twin spring barrels, and rapid time adjustment which also changes the calendar. With automatic winding and only 6 mm thick, it was entirely conceived and developed at the Panerai Manufacture in Neuchâtel.

Water-resistant to a depth of 10 bar (about 100 metres), the new Luminor Sealand – 44 mm is fitted with a semi-matt calf strap, gold in colour with beige stitching, and it is presented in a pear wood box. It is supplied with a second strap of black rubber, a special tool for changing the strap and a screwdriver to remove the buckle. 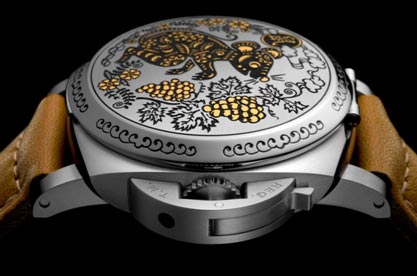 Founded in Florence in 1860 as a workshop, shop and school of watch-making, for many decades Panerai supplied the Italian Navy in general, and its specialist diving corps in particular, with precision instruments.

The designs developed by Panerai in that time, including the Luminor and Radiomir, were covered by the Military Secrets Act for many yearsand were launched on the international market only after the brand was acquired by the Richemont Group in 1997.

Today Panerai develops and crafts its movements and watches at its Neuchâtel manufacture. The latter are a seamless melding of Italian design flair and history with Swiss horological expertise. Panerai watches are sold across the world through an exclusive network of distributors and Panerai boutiques.