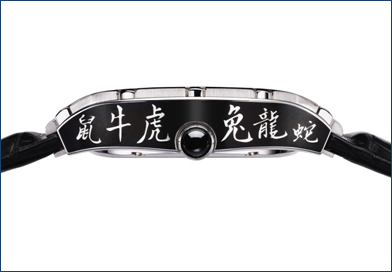 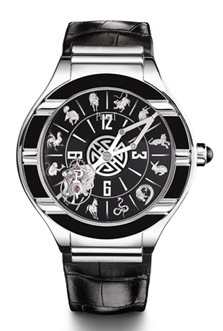 It’s yet another three weeks or so to go before the Chinese zodiac Year of the Rooster kicks off on the 28th January, 2017 as per the Chinese lunar calendar. It is a time for celebration and family bonding, for sharing gifts and meals. The most popular gifting item in China is a fine Swiss watch. And never mind the clampdown, market reports confirm that luxury watches, and most importantly Swiss luxury watches are the most preferred accessory. The trend is more popular among the men than women.

Maison Piaget introduces two limited edition timepieces to celebrate Chinese New Year Magnificent dragon, mischievous monkey or sinuous snake, transforming the signs of the Chinese zodiac into vibrant works of art has become Piaget’s very own celebration of the Chinese New Year. Every year since 2012, the Maison has staged that year’s zodiac sign on the dial of one of its ultra-thin Altiplano watches, masterfully handcrafted in the great Grand Feu cloisonné enamelling tradition. In 2017 the rooster joins the limited edition collection, creatively interpreted within the confines of the watch’s extremely thin case.

The Rooster Reigns Supreme on the Altiplano Chinese Zodiac 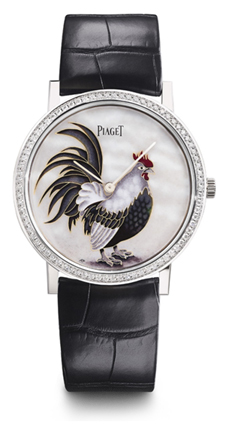 Fusing the finest watchmaking with its passion for the decorative arts, world-renowned master enameller Anita Porchet has brought to life the Rooster of the Chinese zodiac. A sign symbolizing confidence, punctuality, loyalty and honesty, the rooster is known for its pride of appearance therefore requiring a staging that was true to its distinguished personality. Turning once again to the cloisonné enamelling technique, she is able to reimagine the rooster in the signature style of the collection defined by its infinite shades of grey. By partitioning the enamel pigments using cloisons before they are fired multiple times at over 800°C in the kiln, she is able to better isolate the shades of grey from light to more intense in order to express the subtlest of detailing.

Contrasting with the many tones of grey, white and black, the comb on the Rooster’s head and the wattle beneath its chin stands out in a vibrant red, evoking the way in which the rooster shows the world the shimmering facets of its personality. The radiance of the handcrafted enamel with its ethereal glow is enhanced by the natural beauty of 78 brilliant-cut diamonds set on the watch’s white gold case. Limited to just 38 pieces, this collector’s edition is a fitting homage to great skill of the métiers d’art with their ancestral techniques so passionately nurtured by Piaget.

Bespoke Artistry in Black and Gold: The 12 Signs of the Chinese Zodiac on the Piaget Polo Tourbillon Relatif

In keeping with this tradition of paying tribute to the culture of the Asian continent and to mark the 10th anniversary of the famous Tourbillon Relatif movement, Piaget has created a one-of-a-kind piece inspired by the Chinese zodiac. For this exclusive and unique masterpiece in white gold and black enamel, a master engraver and enameller have come together to stage the 12 signs of the Chinese zodiac on the dial of a Piaget Polo timepiece combining champlevé Grand Feuenamelling with delicate hand engravings of each of the animals. From its dial to the back and the sides of the case, this model can be entirely personalized to the wishes of its owner thanks to the creative marriage of two exceptional Art & Excellence techniques.

During a process that requires absolute precision, the engraver traces the design on the dial and creates the cells that will be filled with black enamel. The champlevé technique consists in eliminating the excess material to reveal the desired design rather than simply etching the design into the metal. At this stage, the enameller fills the cavities with black pigments before putting the piece into the fire numerous times at over 800°C before the enamel can be evened out and finally varnished to give it its ethereal radiance. The final stage of engraving is the most delicate as the engraver patiently adds the minute details to the artwork to achieve the highest level of refinement. The master engraver must proceed with the utmost care as the slightest mistake could cause irreversible damage to the precious enamel. Achieving the level of detail in miniature for each of the zodiac signs requires extraordinary skill.

The theme of the Chinese zodiac is carried through on the profile of the watch’s case decorated with the 12 Chinese characters associated with each of the signs of the zodiac engraved in champlevé with black enamelling. On the case-back, the Chinese symbol for longevity is engraved and then delicately enamelled. Inside this artistic ode to the legend of the Chinese zodiac beats the 608P Tourbillon Relatif movement, itself a technical tour-de-force and a revolutionary concept in high watchmaking with the ultra-thin carriage of the tourbillon making a double revolution: one on itself every minute, and one rotation around the dial every hour. The hours are indicated by the central disc, while the seconds are indicated by the carriage of the tourbillon suspended above the dial on the minute hand. In celebration of the movement’s 10th anniversary, the minute hand has been redesigned as a cut-out arrow so as to allow a better view of the decorations on the dial.

Piaget was born in La Côte-aux-Fées, where Georges-Edouard Piaget set up his first workshop in the family farmhouse and devoted himself to producing high-precision movements. This was back in 1874 and marked the start of an ever-growing reputation. In 1943, the company took a decision that would prove crucial to its future by registering its brand name. Faithful to its pioneering spirit, in the late 1950s Piaget set about designing and manufacturing the ultra-thin movements that would become one of the Maison’s signatures and leave a lasting imprint on the art of watchmaking.

But Piaget has also always represented a style: a marriage of gold and an explosion of color, driven by Yves G. Piaget, the Maison’s jewelry collection grew in an original direction with a resolute emphasis on color, giving birth to the iconic Piaget look. Building on over 140 years of history, the ever-bold Maison continues to innovate by offering jewels in motion, elegant and extravagant High Jewelry collections, as well as remarkable watches. In a world unconstrained by boundaries, Piaget the watchmaker-jeweler continues to explore unexpected creative possibilities, turning gold, stones and gems into brilliant works of art.

Piaget has demonstrated a longstanding commitment to supporting cinema and the arts. In February 2017, Piaget will once again be serving as Premier Sponsor of the Film Independent Spirit Awards for the tenth consecutive year.