Just two days before we could ring in the New Year 2021, just two years before he could claim the century innings of his birthday, Pierre Cardin breathed his last at the American Hospital in Neuilly-sur-Seine, outside Paris. He set many precedents and challenged the established mores of the time. Meher Castelino met Pierre Cardin on his visit to Mumbai in 1993. She shares her memories of that meeting with the King of Fashion in an exclusive for the readers of The Luxury Chronicle.

The news of Pierre Cardin passing away at 98 years of age on 29 December 2020 brought sadness to lovers of fashion, for the man was a fashion maven who set trends and created history in the licensing of the fashion business worldwide. My meeting with the multi- faceted ‘diamond’ of the global fashion industry was truly a memorable one.

There was a posse of journalists and TV reporters impatiently waiting in the Oberoi Towers Hotel, Mumbai for France’s most celebrated designer Pierre Cardin to give them an audience.

I was lucky to meet the Parisian maestro himself in December 1993 for a quick one-on-one when he happily unveiled his story and love for fashion and the launch of this label in India. Widely travelled, Cardin’s list of honours along with his pioneering fashion achievements could fill a volume. Before our interview in Mumbai, he had toured the Far East and Vietnam where his store would open. He excitedly revealed about the Pierre Cardin Fashion Pvt Ltd with him at the helm of operations in the company, partnered by Mr S M Shetty of the S M Dyechem Group, Mr Mukesh Kalmadi of the Sai Service Group and Mrs Anuradha Ruhil. The ready-to-wear garments would hit the Indian market in early 1994 with a fashion show featuring Indian models and the very experienced doyen of Indian fashion Jeannie Naoroji as the consultant for the brand.

Cardin’s Indian connection started with the statuesque late Indian model Phyllis ‘Anjali’ Mendes who moved to Paris in 1971 and was his muse and top mannequin. Mendes had now turned Cardin’s Directress for India and Far East. Cardin, no stranger to India, had visited the country several times. He was a favourite of textile expert Pupul Jayakar. My single question was enough for Cardin to talk about himself. Born in Italy on July 2 1922, he studied in France. In 1945 his first assignment was with Jeanne Paquin and then Schiaparelli. “I created the costumes for the film “Beauty and the Beast” along with Christian Bérard and Jean Cocteau,” he recollected. In 1946, Cardin moved into the fashion world with Christian Dior who had just opened his first fashion house. 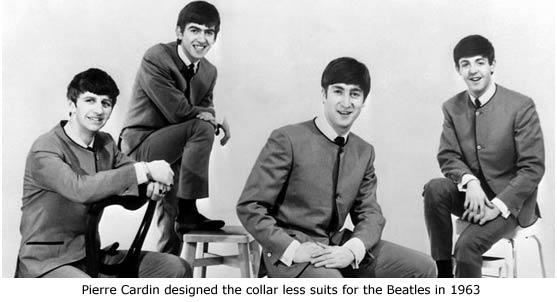 His experience with Dior encouraged Cardin to start his first fashion house too in 1950 on 10 Rue Richepanse designing costumes and masks for the theatre. It was in 1953 that Cardin shook the fashion world with the Bubble dress that encouraged him in 1954 to open his first boutique EVE. Although known for his women’s wear, Cardin opened his second boutique in 1957 for men called ADAM and was now  thinking of ready-to-wear clothes.

“I designed flowery frivolous men’s ties and shirts in 1957, which are popular in the ‘90’s. My first men’s wear collection called ‘Cylindre’ in 1960 had students as models, since there were no professional ones,” he reminisced. His space age dresses shown with helmets and the collarless men’s jackets that the Beatles turned into their trademark clothes were some of Cardin’s futuristic creations. Known as the ‘Master of Licensing’, Cardin opened a theatre, restaurant, cinema, and exhibition halls in 1971, besides opening Maxim in 1979 with branches in Germany, Brussels, New York, Rio, Peking and California. For Cardin, his clothes, theatre, restaurants and galleries went hand in hand. He always felt that if one is well dressed, one needs to show it off at the best places, which he said were provided by him.

When it came to licensing, Cardin had nearly 500 products besides garments cosmetics, perfumes, watches, furniture, pens, accessories, skis, liquor and even chocolates that carried his name. He planned to add cosmetics and perfumes in the Indian market suited to the climate and skins. It is believed that Cardin earned more from the sale of neckties than an haute couture dress. Since the 60’s Cardin was associated with India but it took him nearly 30 years to bring his label into the country. Cardin had planned two collections of over 100 styles per year for summer and winter, priced between Rs 375-2000. “I design and price garments for the people of each country. My designers will make periodic visits to India for checking quality and fabrics,” he revealed about the Indian operation.

Indian mills would provide the fabrics for the western wear catering to ladies, men’s and kids clothing but Cardin was firm about no ethnic wear or saris. Exclusive Cardin shops were planned for Bengaluru, Delhi, Mumbai, Kolkata and Pune with the Cardin style of décor. The total investment was Rs 25 crores with an initial start of Rs 2 crores.

“My other licensees all over the world will be encouraged to buy the Pierre Cardin label from India,” he added Very fond of Indian textiles, Cardin revealed that his own shirts were made from Century Fabrics. Cardin was the first haute couture designer to enter India so he was not worried about the foreign competition already in the country.

“I set the trend and others follow. They are like hamburgers and fast foods while I am a couturier,” he stated. At the time of our interview Cardin’s empire was worth 12 billion francs worldwide but he had not named a successor.

“I am not worried about my fashion house. It is in very good hands. I have trained people who are all competent and familiar with my way of work,” he concluded.

But in 1996 the fashion scene for the Pierre Cardin label was not as buoyant as before and quite different. Only women’s wear was sold in India, while boutiques in Lahore, Islamabad, Peshawar and Karachi had men’s wear. The Indian customer is known not to be too favourable to foreign labels made in India, which many foreign labels realised later and promptly imported their brands made in Sri Lanka, Taiwan or Vietnam. The Indian customer was hoping that like the Cardin label sold in Taiwan and other parts of the world was imported from Italy, the same would be done in India, so they couldn’t understand why the brand’s garments were made locally?

Cardin felt that since the Indian market was very price conscious an imported garment would not be suitable. He tried to adapt to local tastes, made mistakes and some of the original French paper patterns were unsuitable to Indian figures. Yet the garments were still made in India but they were now stylish creations for working women and for party dressing that featured minis, midis, maxis, skirts, jackets, trousers, dresses, blouses, Bermudas and knitwear in the price range of Rs 450 to 2000 and were on display at boutiques in Mumbai, Bengaluru, Chennai, Kolkata, Hyderabad, Pune, Patna, Delhi and Chandigarh. Cardin’s prét line shown in Paris in March 1996 was brought to India with minor adjustments. Cardin also discontinued children’s wear and leather items and put his concentration only on women’s wear. Twenty-four years later after my interview with Pierre Cardin, the brand is still sold in India with its name on various products like hand bags, pens, perfumes, watches, accessories, garments, sun glasses etc. Pierre Cardin, the first haute couture designer to think of pret-a-porter, the democratisation of fashion and licensing proved that to be memorable one has to be a trendsetter!