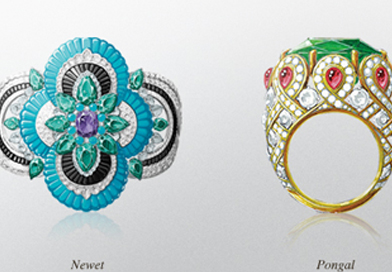 A 100 years of Van Cleef Arpels

In celebration of the hundred years of Van Cleef & Arpels, the Maison’s gemmologists created a dazzling new collection, Pierres de Caractère™ by incorporating sets of extremely rare stones, invoking memories of the legends, of the journeys of the Arpel brothers around the world in search for the perfect stone. Claude Arpels believed that ‘Every stone has a soul’. Such has been the tradition at the House of Van Cleef & Arpels, which was born out of the marriage of Estelle Arpels – the daughter of a precious stone merchant – and Alfred Van Cleef, the son of a lapidary.

In the 1930s, the second generation of the Arpels family made their entrance. Claude, Jacques and Pierre – the sons of Estelle’s brother Julien Arpels, who were possessed by a genuine passion for stones and a curiosity for the cultures of the world. The journeys they made between the 1950s and the 1970s were rich in fabulous treasures and remarkable encounters. Claude Arpels – the eldest of the three – was a particularly indefatigable traveller, referred to in the press of the time as the “Diamond King of Bombay” or the “Friend of Maharajas”.

His travels, sometimes accompanied by his family, took him to Egypt and the Lebanon, but also to China, Thailand, Cambodia and Japan. He went round the world several times and made at least ten visits to India, which he referred to as his “jewel safaris”. The High Jewellery Maison’s reputation, along with Claude’s charm and expertise, served as an introduction to the courts of the Maharajas, where he discovered an abundance of magnificent stones and jewels. This was also the time when the Indian royalty were given a privy purse by the government of independent India, which was going to be abolished altogether in 1971.

In 1956, Claude returned from Bombay with the “Neela Ranee”, better known as the Blue Princess. At Florence Jay Gould’s request, this oval sapphire of a deep, velvety blue hue became the pendant of a necklace. Before long, another wonder was competing for the

attention of refined collectors. In 1960, Jacques Arpels returned from an auction at Sotheby’s in London with a genuine rarity: a pink diamond weighing 34.64 carats from India’s Golconda mines. To celebrate the event, a party was held at the Place Vendôme boutique in the presence of the Maharani of Baroda and her son: the stone was christened “Princie” in his honour.

From these extraordinary journeys, Claude Arpels brought back a large number of cut, polished or sculpted stones, pearls and pieces of jewellery from the Maharajas’ private collections. Sometimes displayed by the Maison, they contributed a far-off inspiration to its creations. “Now as I look at the Rewa jewels and the Golconda diamonds and the oriental pearls which I brought back from other places, I can feel all the oriental poetry symbolized by the magnificence of the Thousand and One Nights legend and the romance of the Taj Mahal.”, Claude Arpels confided at the end of his account.

During one of his voyages, Claude Arpels met his future wife Mherulisa who was born in Pakistan but had lived in India since she was 20. They were married in 1970. Her personality and taste exerted a strong influence on the Oriental inspiration which made itself felt in the High Jewellery creations of Van Cleef & Arpels in New York.

In 1971, this legendary pink diamond was joined by the Walska Briolette: a yellow diamond of 95 carats, named after its enchanting faceted teardrop cut and its ex-owner, the opera singer Ganna Walska. Van Cleef & Arpels acquired it at an auction at Sotheby’s in New York and set it on a magnificent bird clip, adorned with emeralds and a sapphire. The same year, the Maison also presented the extraordinary Thibaw ruby (named after King Thibaw of Burma, to whom it belonged). Purchased by Jacques Arpels, it was re-cut to a cushion shape weighing 24.82 carats before lending its volume and sparkle to an exceptional ring.

Paying an ode to that century old tradition that has held fast even to this day, the Maison’s gemmologists have created a dazzling new collection, Pierres de Caractère™ by incorporating sets of extremely rare stones. The flamboyant rubies from Mozambique – weighing more than 40 carats – on the Oriental Princess necklace are matched by the Ancolie Précieuse ring’s old cutD IF type 2A diamond (9.03 carats), a stone for genuine connoisseurs. The two Fancy Vivid Orangy Yellow diamonds weighing 9,04 carats on the Precious Light earrings echo the sumptuous 27.81-carat Colombian emerald that adorns the Pongal ring. Other creations feature magnificent fine and hard stones, such as the pink spinel that lends its sweet hue to the Summer Cocktail ring, or the carefully sculpted sea-blue turquoise on the Sea Side ring. A rich and prestigious palette characterized by excellence.