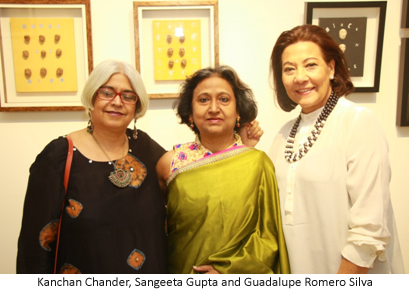 The ongoing exhibition, ‘Half Sky’, at the Prithvi Fine Art & Cultural Center has on display, the works of four women artists of different nationality. The one common thread is that each of them has an India connection, by virtue of having lived in this sub-continent, with three of them as part of the diplomatic community in Delhi. The inauguration of the exhibition was hosted on 3rd October, 2018 at Prithvi’s Gallery  in Safdarjang Enclave, New Delhi. The participating artists are İpek Denizli Karagöz from Cyprus, Eleni Stoelinga-Tsiapara from Netherlands, Mili Montiel from Venezuela and Guadalupe Romero Silva from Brazil. The exhibition ‘Half Sky’ is jointly conceptualized and curated by artists Kanchan Chander and Sangeeta Gupta. 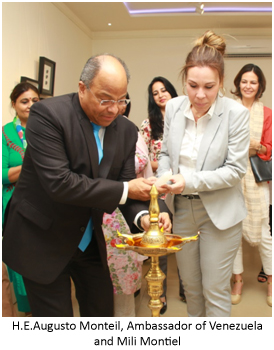 The multi-talented İpek Denizli Karagöz from Cyprus is a Visual artist, International Artist Residency Curator and a Street performer. While the artist was not in the country for the exhibition, four of her works were on display. Also not present in India was the artist Eleni Stoelinga-Tsiapara from Netherlands,whose sculptures have been getting her good reviews. As the wife of the erstwhile Netherlands Ambassador to India, H.E.Alphonsus Stoelinga, she spent many years in this country. India’s strong influence on both, MiliMontiel and Guadalupe Romero Silava, lead them to discovering the artist within. Mili Montiel is the wife of H.E.Augusto Monteil, Ambassador of Venezuela in India. Besides being an artist, Mili is a business administrator and publicist.Upon arriving in India, she fell in love with the colors and started painting teapots. She was interested in painting Mandalas, applying the Dot Art technique that allows her to express the color,the symmetry and the happiness. For this exhibition, she presents a special series of Mandalas in different mediums.

Guadalupe Romero Silva is herself a career diplomat, and has served as a Hondurandiplomat in Paris, Brasilia and London. She has been in India for the past three years, as the wife of the H.E. Mr. Tovar da Silva Nunes, Ambassador Embassy of the Federative Republic of Brazil, in India. Her Indian experiences turned her into a photographer and artist. She has the largest body of work on display at the Prithvi Gallery, with her framed photographs, brass sculptures, and works with clay.

Speaking about the exhibition, Sangeeta Gupta, who runs the Prithvi Fine Art & Culture Center, said that the objective of the exhibition was, ‘..to bring the culture of the world together, to share, to exchange art and ideas from different cultures and to learn, to respect each other’s differences.’ 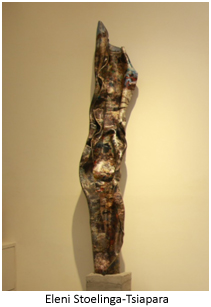 The opening party was a crowded affair. Some of the people at the opening were Pakistan High Commissioner Sohail Mahmood and his wife, H.E.Augusto Monteil, Ambassador of Venezuela in India, H.E. Mr. Tovar da Silva Nunes, Ambassador Embassy of the Federative Republic of Brazil, H.E. Jean Claude Kugener, Ambassador of Luxembourg, H.E. Marten van den Berg – Ambassador Designate Netherlands Embassy in India. Also present was the spouse of the Korean Ambassador, as well as artist Stephanie Arpels from France, members from the Indian artistic and diplomatic communities, retired bureaucrats, and the many friends and family members.