Come November, and the buzz at the Moscone Centre in San Francisco is palpable. The 57th edition of this most anticipated auto show, presented by AutoTrader.comand supported by the California New Car Dealers Association, was held from 22 – 29 November, 2015. Over 600 cars were on display, including new releases and upcoming models of cars from companies across the world. Hundreds of auto enthusiasts flocked to view the 2015 models of sedans, sports compacts, SUVs, trucks and vans. Sufficient hype was built up with ‘by invitation only’ sneak preview event for the media on 21st November. World’s leading car and bike magazines were in attendance at the packed auditorium at 747 Howard Street.

With a surfeit of auto expos popping up year-round, auto makers are hard pressed to find the balance between the right amount of publicity and overdoing it for their upcoming models. Hence, despite the 38 manufacturers from across the spectrum of the auto world, some surprises were yet in store for the visitors.Vipers didn’t feature at the Dodge arena and BMW M5s and Z8s were conspicuous by their absence.However, the 600 models on display left newcomers spoilt for choice. BMW, continuing its thrust on the i8, made the model their central attraction, Cadillac made a subtle statement with the ATS sedan. Bentley showcased the 2015 Mulsanne facelift. Jaguar had four models on display including the XF-RS and XF Final Fifty. Jaguar’s interest in the international markets having blossomed in the past couple of years seemed to generate a surprisingly large crowd with each model being admired and criticised by auto writers and enthusiasts. Lamborghini of course had the Huracan and the Aventador to grab eyeballs and headlines.The advent of both Jaguar and Lamborghini into the smaller, space efficient compact sports segment has been the talk of the automotive world for quite some time.

The showstopper was Toyota – 21 models on display including the new Yaris and Prius plug in, touted as the most efficient Prius yet. Carrying forward its Hybrid Synergy Drive Technology, Toyota has extended its fuel efficiency credibility by introducing a plug in – charge and drive feature. While the car still needs gasoline to operate properly, consumption and emission specs have improved radically. A 1.8-Liter Aluminium 4-cylinder DOHC 16-Valve with Variable Valve Timing with intelligence (VVT-i) engine, it generates 98 hp at 5200 rpm and 105 lb.-ft. of torque at 4000 rpm. The Prius and BMW i8 have emerged as the cars of choice for the environmentally sensitive upper middle class and uber elite respectively.

The other attraction from Toyota was the Mirai, the futuristic hydrogen fuel cell powered vehicle. Toyota plans to make 700 vehicles for sales in the period December 14-15, with prices starting from ¥6.7 million (ex showroom, Japan). Toyota’s dream of bringing into production its 2013 concept FCV car unveiled at the 2013 Tokyo Auto Show has been realised. Despite significant unit downsizing, this car has been claimed to deliver an output power of over a hundred kW. The Toyota FCV concept can accommodate four occupants. For the full-scale market launch in 2015, the cost of the fuel cell system is expected to be 95% lower than that of the 2008 Toyota FCHV version.

Manufacturer Ride and Drives: As expected, Manufacturer Ride and Drives were the most sought after attraction at the SFA show. Anyone 18 and above, holding valid drivers’ license could walk in at a scheduled time and demand a ride in the cars featured. A quick breathalyzer test, a form duly filled and  drive on a track around the Center. Cadillac’s ATS sedan was available for the drive and was a big draw. Also available for test drive were the Camaros and Impalas, Golf GTi’s and Jettas. The Ride & Drive attracted hundreds of prospective buyers.

Academy Vintage Car Collection: Amidst the scores of glitzy new vehicles with hi-tech specs, there stood the elegant flock of sedate veterans, the. Academy of Art University’s collection of museum maintained vintages, which is an annual attraction not to be missed. Immortalised by Hollywood filmmakers,  the beautiful maroon Trucker ’48, nicknamed “Torpedo” stood out with its plush maroon trim and a central third headlight.

Visitors were smitten with the noir 1935 Duesenberg SJ Convertible Coupe, known to reach 135 mph. The epitome of elegance, this classic coupe’s past owners include such as William Randolph Hearst. Art Deco lovers had their high with the Pierce-Arrow Silver Arrow considered a Depression era masterpiece. Part of a larger collection housed at Academy of Art University Automobile Museum on Van Ness Avenue in San Francisco, the unique examples on display at the Auto Show include a few recent acquisitions, such as the stunning Bugatti Type 57 Atalante Coupe.

Ferrari Club – Pacific region display: The 1962 established Ferrari Club of America, Pacific region showcased a line of classic and trending models to cater to the cult following this brand has in the States. Among the events this year were social gathering of its numerous members, rides and drives, wine tastings and technology sessions with representatives briefing its members on the latest incorporations and upcoming innovative plans of the company. The absence of the legendary Enzo was a dampener.

Dominator Street Rods: The last show for Leonard Lopez’s popular franchise this year was the SFA. In 2009 Dominator Street Rods was opened in Tracy, California.  Dominator, considered a true piece of automotive art, has since become a member of The Grand National Roadster Show Hall of Fame and became a recipient of the Grand National Roadster Show Builder of the Year Award. At this SFA they showcased eight primed models, including a customised 1969 Chevrolet truck; a 1970 Plymouth Barracuda; a 1932 Ford 3-Window Coupe and a 1932 Ford Roadster.

Then there were NCI Racing simulators where visitors got a firsthand virtual experience of driving an F1 vehicle. An entire section dedicated to automotive accessories with brands ranging from Subaru to Ferrari exhibiting jackets, mufflers and fan ribbons. The SFA held up its tradition of being a blend of the old and new; a show meant for all classes and interests. The dates of the 2015 edition were announced on the last gala evening, so block your calendar for 21st  November 2015 – or watch this space. 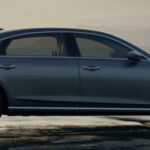 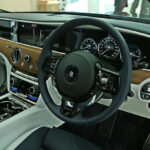 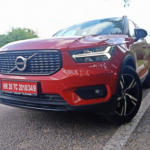 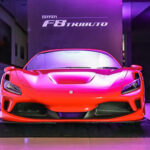