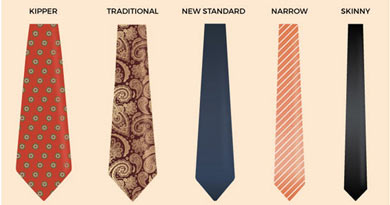 Just when we got used to slouching around in loungewear and thought all formal clothing will forever be banished to deep end of the closet, it is that utterly useless strip of fashion accessory, the one that gets you by the neck in a noose, that has reappeared on fashion ramps, hogging the spotlight. The dreaded tie has returned with vengeance, seeking both men and women this time. Though must admit, in this era of WFH, the formal dress code for remote conference is easily accomplished by wearing a tie. Meher Castelino’s insight into this one-size-fits-all accessory is very useful.

For men, a necktie is not just a symbol of self-expression of the many moods of the wearer. Rather it is a status symbol, a badge that signifies position. Very often fashion gurus have felt that a necktie serves no purpose other than pure decoration, though at times it could speak a silent language about the man.  But now, with the necktie coming to the forefront in 2021 for women, there is great excitement; although for young schoolgirls the tie was a mandatory accessory in the uniform at many educational institutes.

In 1954, the late M Y Noorani set up the Metropolitan Trading Company to manufacture ties and accessories when he got stuck with rolls of scarf fabrics. The name selected was Zodiac and very soon, the ties and the name catapulted the company to the top of the fashion ladder making the tie the di rigueur necessity in every man’s wardrobe. With an impressive advertising campaign the bearded Zodiac man became as famous as the Amul butter girl and the Air India Maharaja. Soon there were many clones of the name Zodiac since it was believed that the letter ‘Z’ was a lucky alphabet. 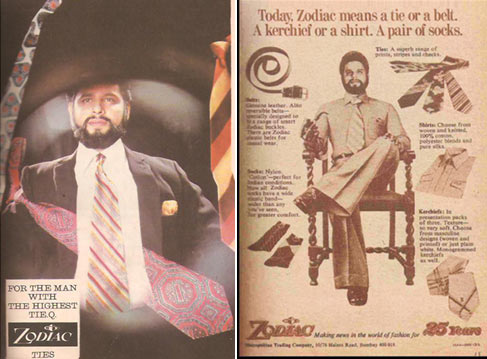 With a flourishing business of Zodiac ties, the company was prompted to move aggressively into the men’s wear market by adding shirts, trousers, suits and leather accessories along with Zodiac exclusive stores around India and a booming export business.

In 2021, the necktie seems to have once again emerged as the centre of attention for not only men but also women. This time global women ’s wear designers are battled on the ramp with their versions of the neckties for their Autumn/Winter 2020 collections featuring the tie as the focal point. One would however imagine that with Work-From-Home(WFH) being the order of the day during the pandemic, the tie would have been relegated to the back of the closet. However, this persistent, stylish, sliver of silk has held its own through the vagaries of fashion even as its blade increases or decreases in width. Even though the athleisure, hip hop, reggae culture did attempt to push the tie into the background there are still umpteen brands around the world and in India that still give a thumbs up to the stylish noose around the neck and have not been able to shake the tie roots. 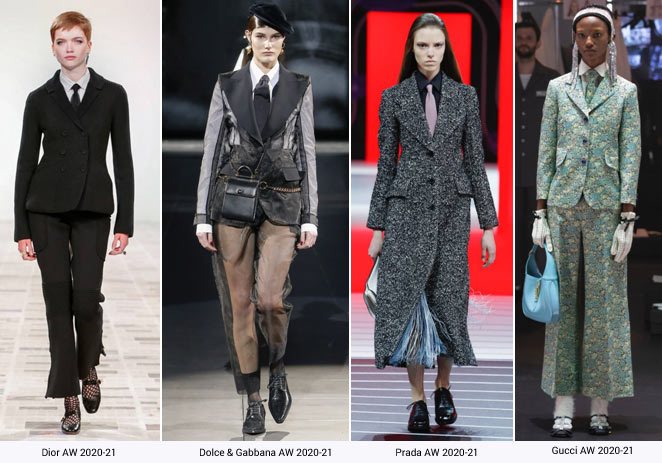 The Autumn/Winter 2020 Look For Women 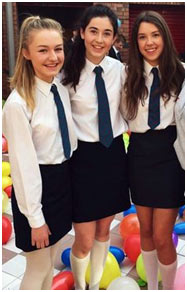 The tie gets prime spot in not only men’s wardrobes but even makes an impressive entry into women’s cupboards with Gucci to Chanel and from Prada to Dior turning their designing skills onto the necktie. Ever since glamorous female models appeared on the ramp at numerous shows in Milan and Paris with a variety of ties around their necks, women have been rushing to stock up on ties of all kinds that will add value to their wardrobes and are looking at this male accessory with great respect. What with women taking on the head honcho position in global companies across countries; the tie is the perfect accoutrement for the power suits that make a distinguished statement for women at the top. Maria Prada’s latest collection made a great splash on the runway with ties for women in bright red, blue, pink worn with waistcoats, jackets and sharply cut collars. Dior also moved into top gear with the tie for women but kept it classic with a black suit and white shirt, while others added it at times to button-down shirt collars. Prada though added a flirty touch to ties that were worn with a slashed skirt midi pinafore.

The schoolgirl uniform tie looks are quite innocently attractive, while the exaggerated knee length tie brings a quirky touch to the accessory. So it seems, where there is a collar for men or women there has to be a tie. 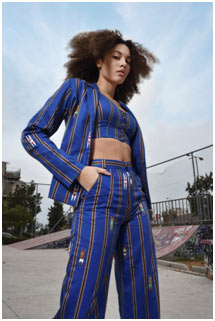 Young and trendy, designer Aniket Satam explains this new trend in neckties for women, “It is a reflection of the whole androgynous wave that has come into fashion. Post the feminist movement women’s wardrobes had gone through a drastic masculine transformation. The whole wave started from pants suits and female tuxedos. Now the tie has become a part of women’s wardrobes. Some where it accentuates highlights or underlines the matter of the fact that women are now taking charge of formal clothing and being more a reflection of how in the 80s the power suit came into the picture similarly the tie culture in women’s wardrobe takes the story ahead.”

Talking about gender neutrality Aniket continues, “Gender fluidity has become a new acceptance in the context of fashion because people are now challenging the societal norms and embracing their own individualistic self. With this in mind people are dressing up in the way they feel confident and comfortable more than what society had pre-decided according to gender. I think Gucci lead this movement of cross-dressing culture. People are more open and embracing sexuality as never before and people are getting more comfortable and society is more relaxed in context with judging others and their appearances.”

The tie’s width is normally in sync with the lapels of a suit. For instance, broad lapels demand broad ties, while the narrow ones look best with skinny ties. The current trend is a 3.5 inches wide blade to balance the lapels, though a 2.25 or 3.25 inches blade is also acceptable. There was an era in the late 50’s and early 60’s when the skinny ties measuring 1.5 inches became a rage thanks to British bands like the Beatles. The width of the tie should also match the height and length of the collar. Ties are also often matched to the pocket square. 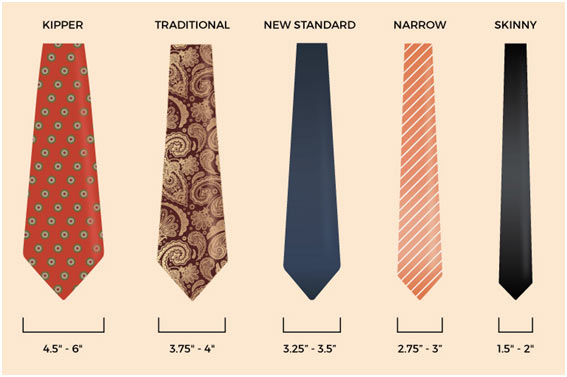 Who Should Wear a Tie?

The normal 3 to 3.5 inches wide tie looks good on most men except those who are short and stocky with short necks. A skinny tie is ideal for a tall, thin man and looks good with a one or two button suit jacket. The suit jacket always governs the choice of the tie whether it is single or double-breasted and so does the colour of the shirt.

Some tips on how to wear a tie will make a lot of difference to the wearer. The tie knot should be tight with a tiny dimple underneath to give an impressive touch. The narrow end of the tie should be slipped into the manufacturers label behind the broad end. The tie knot is important. There is the half Windsor knot, the Windsor knot, the Four-In-Hand knot and the tip of the tie blade should just touch the top of the trouser waistband. 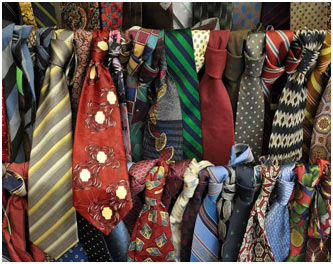 The pattern of the tie makes the final impression. Besides the various solid colours that signal the mood of the wearer, the weaves and prints tell a strong, masculine tale. Stripes, checks, polka dots and pin dots are the popular patterns along with favourites like the paisley and club or the plaid and foulard designs. Other designs include houndstooth, jacquard and textured fabrics besides of course the mesh and knitted versions.

Is Aranyani the next big luxury brand?

In the Jungle with Fendi’s Sunglasses

A stroll through the World of Fine Leather

GUCCI takes the lead with OFF THE GRID

Journey of a Bag around the Globe

The Rise and Rise of South African Luxury