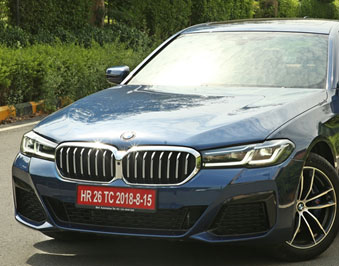 The 5 Series was first launched in 1972 and it laid the foundation of success that BMW is today. The 5 Series also played a big part in establishing BMW as a maker of luxury cars with a sporting twist. The phrase “ultimate driving machine” was coined for a reason after all. In essence, BMW luxury sedans are executive cars being fitted with all the luxuries but at heart remain committed driver’s cars with an exciting engine to match.

The new 5 Series was launched last month on the 24th June, with some subtle but extensive tweaks to further polish this sedan to take on its rivals. In the flesh it very much screams BMW and is marked out as the 5 Series easily while the updates further ramp up its style quotient. Of course, even as the jury is out on the grille design of cars like the BMW X7 or 7 Series, the 5 Series gets a more subtle grille albeit still being bigger. Finished in chrome, the car does look imposing and the slimmer new Laser lights contrast well with that. The bumper has bigger intakes, yet the stance is of a low and crouching sports sedan. It means business, this 5 Series. There are new 18-inch alloy wheels too. The rear also is adorned with a set of new tail-lamps with a darkened garnish. Finished in this “Phytonic Blue” shade, the 5 Series reeks of sinister class wrapped around in an imposing executive sedan body style. 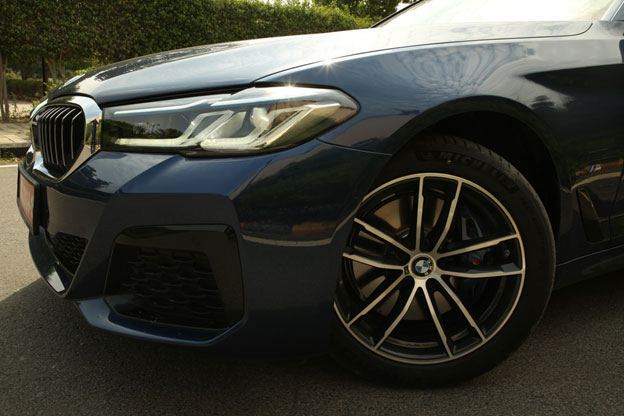 The interior is arguably even better with high quality leather (one has many options like Nappa leather and more) along with a clear distinguishing trait of being a bit more sporty than its rivals. You sit low and the big steering wheel has a meaty grip. The 530i that we have here has perforated Sensatec upholstery along with a nice, quilting effect. Space and comfort is ample to say the least. There is enough headroom for even tall passengers. That said, BMW’s own 6 Series GT and some rivals offer a better rear seat experience but the 5 Series is pretty decent overall.

New to the 5 Series is a bigger 12.3-inch control display, which has a crisp touch response along with a brilliant screen display. It is the nerve centre of the 5 Series, housing all the controls. A few toys offered on the new 5 Series include gesture control where you use your fingers to gesture towards the screen to use features like turning up the volume or taking/rejecting a call. The tech fest does not end there as it gets a bigger display key which has a touch screen too and you can remote control park the car amongst accessing other information. Newly introduced Reversing Assistant also gives support in reversing out of a parking spot or through narrow driveways. It keeps a record of the last 50 meters driven and assists by taking over the steering.

Oh, and there is the 16-speaker Harman Kardon Surround Sound System, which is super. However, the sound of the engine in the 530i would be better music in our opinion. Our test car was the 530i. It has a 2-litre 4-cylinder petrol engine, heavily turbocharged to pump out 252 hp and peak torque of 350 Nm. As a result it is lightning quick when provoked using the myriad driving modes on offer and it is a real joy to hustle around corners too. There is a sense of purpose and character stemming from the way the 5 Series drives and it basically feels like a sports car in sedan clothes. That said, you can drive it sedately too with enough comfort. This dual-personality is what makes the 5 Series stand out. It is a different luxury sedan and the one that would be the choice for those who like to drive themselves and also be driven around. Luxury as well as performance, the new 5 Series has got you covered!

The car is available at introductory prices (ex-showroom) as follows –

Taming the Mercedes A45 S at the altar...

Auto ReviewFerrari Roma is a fast and thrilling...

Is Lexus RCF the ideal super car for...