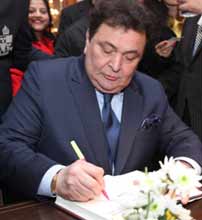 A lively interaction between the irrepressible Suhel Seth and the iconic star Rishi Kapoor, who says it as it is, made for an interesting book launch of the latter’s much awaited tell-all autobiography Khullam Khulla – Rishi Kapoor Uncensored. Published by Harper Collins India, the event was hosted on 17th January, 2017 at Diwan-I-Am, The Taj Mahal Hotel, New Delhi. Rishi Kapoor’s family was present among the audience. Wife Neetu Singh, Ridhima Kapoor, her husband Bharat and their children, along with several eminent personalities and celebrities graced the occasion.

Rishi Kapoor has acted in several movies. His career started with his role of a gawky adolescent pining for his schoolteacher (Mera Naam Joker, 1970), going on to the recent tale of a naughty ninety-year-old (Kapoor and Sons, 2016), Rishi Kapoor has regaled audiences for close to fifty years. He won a National Award for his debut, became an overnight sensation with his first film as a leading man (Bobby, 1973), and carved a niche for himself with a string of romantic musical blockbusters in an era known for its angst-ridden films. He was the youth icon that is still the toast of the satellite TV circuit. The songs he lip-synced are the bread and butter of all radio stations even today. Then there was the second coming after a brief hiatus in the 1990s – and today, he has reinvented himself as one of the finest actors in mainstream Hindi cinema with powerhouse performances in films like Do Dooni Chaar, D-Day, Agneepath among others which continue to win him accolades and awards.

What makes this special is that it’s a characteristically candid book, where Rishi Kapoor brings Punjabi brio to the writing of KhullamKhulla. This is as up close and personal a biography as any fan could have hoped for. He writes about growing up in the shadow of a legendary father, skipping school to act in Mera Naam Joker, the workings of the musical hits of the era, his streak of rotten luck with awards, an encounter with Dawood Ibrahim, his heroines (their working relationship, the gossip and the frisson that was sometimes real), his approach to his craft, his tryst with clinical depression, and more. A heart-warming afterword by Neetu Singh rounds off the warmest, most dil se biography an Indian star has ever penned.

Speaking on the occasion, Satyajeet Krishnan, General Manager, The Taj Mahal Hotel, New Delhi said, “The Taj Mahal Hotel is privileged to associate with Harper Collins for the launch of ‘KhullamKhulla’ by the much celebrated Rishi Kapoor. The book is a delightful account of the veteran actor’s life and career and makes for an engaging read.”