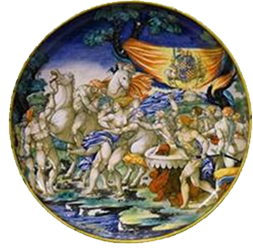 The spectacular success of Sotheby’s London sale on 21st January, comprising various artifacts under the category “Of Royal and Noble Descent“, was an indicator of the thriving art scene and a growing breed of international collectors. Participants came from 31 countries (including Russia, Asia, Middle East and Latin America). The sale totaled £2.5 MILLION (€3.2 MILLION), well above pre-sale expectations (£1,380,380-2,099,470).

The sale featured fascinating royal and aristocratic heirlooms from the collections of prestigious European dynasties and institutions. Almost 90% of the lots were sold, with 60% of them achieving prices well above their high estimated prices. Nearly 20% buyers were new clients.

The Top lot in the sale was a large Maiolica footed dish, attributed to the ‘Painter of the Apollo Basin’, which sold for £257,000 (£336,079), thereby establishing the highest price in the sale. The artwork which came from a European private collection had been estimated at £30,000-40,000.