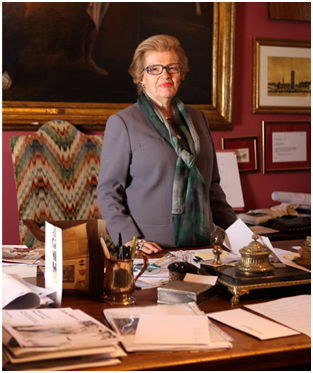 The matriarch and honorary President of the Salvatore Ferragamo S.p.A., Wanda Ferragamo, breathed her last on Friday, 26th October 2018, in her hilltop villa near Florence. She was 96 years old. Wanda took over the reins of the company founded by her husband Salvatore Ferragamo in 1927, after he succumbed to cancer in 1960 at 62 years of age. Wanda, who was 24 years younger and just 38 years old mother of their six children at that time, stepped in to take charge of the business, assisted by her oldest daughter Fiamma Ferragamo.

Wanda Ferragamo went to create one of the biggest family run luxury brand, assisted by her children, with 350 patents and created 20,000 shoe designs. The namesake brand was patronized by the celebrities in Hollywood and globally as well. She went to expand the product line and introduced handbags in 1965, menswear in 1970, eyewear in 1990 and perfumes in 1997 with Bulgari SpA. Through the years, Wanda lost her oldest daughter Fiamma Ferragamo in 1998. Her other daughter Fulvia Ferragamo died recently in April 2018.

Wanda Ferragamo received Italy’s highest honor, the Cavaliere di Gran Croce, in 2004. The company Salavatore Ferragao SpAemloyes 4,000 employees and has reported a revenue of $1.6 billion in the recent fiscal year. Wanda opened a museum inside the Company’s headquarters as a tribute to her husband. She has penned her autobiography ‘Stepping into the Dream’ in 2008, jointly with Jay Mulvaney.