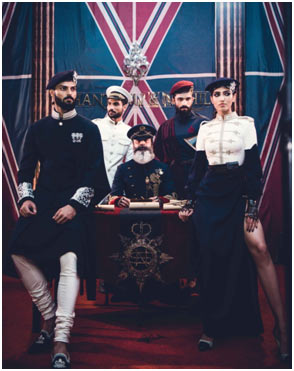 The Delhi based designers Shantanu & Nikhil presented their Autumn/Winter 2017 collection at The Imperial New Delhi on the 15th of July, in association with Swarovski. Inspired by the vintage regalia of the military uniform, the collection was titled ‘The Regiment’.

Men in uniform always look dashing, and the effect was suitably achieved even as the men’s wear line complimented the women’s wear with equal élan. With a dramatic underplay of colonial regime, and the valorous soldiers of the INA, the headgear was a constant, adorned as it

was with Swarovski crystal studded broaches and chains on berets, caps, turbans. The Chinese collar and Bandgalaa jackets dominated the look. Smart single-breast pea jacket, a fur bolero, majorette inspired tops and bodices over gowns and skirts, uneven hems, layering, a return of the churidaar after a long gap, leather belts, boots, embroideries in thread and wire. Was it zardozi, couldn’t tell, even from the close quarters of the front row.

The Swarovski studded broaches, medallions, and other embellishments were equally the co-star in the collection. Leading up to the association for this collection, Swarovski specially flew down the designers to their manufacturing facility in Salzburg. The famed automobile designer Chris Bangle has designed the Swarovski brooches and medallions.

Commenting on this, Vivek Ramabhadran, Vice-President, Asia South Region for Swarovski Professional, said, “What began from Shantanu & Nikhil’s journey to the Swarovski Headquarters in Austria has resulted into a unique product in the form of their collection – The Regiment. They worked with the creative design team there which also helped them understand the DNA of our product and innovations. The bejeweled brooches and medallions in their collection are the perfect amalgamation of design, creativity and passion put together in the designer duo’s signature style. We loved how they experimented with different and innovative Swarovski crystals to put together this season’s bold and sharp accessories.” 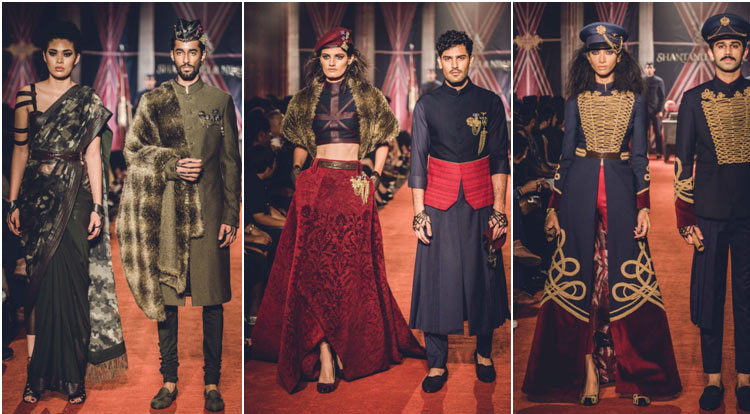 Vijay Wanchoo- Sr. Executive VP & GM, The Imperial New Delhi said “The Imperial takes pride in inspiring this magnificent Regiment collection by Shantanu and Nikhil, a coveted name in the design industry. The undertone of the collection depicts the same tradition prevalent during the British Raj, which is also the cornerstone of The Imperial heritage. The walls of the private rooms at 1911 Bar are replete with uniforms of the army men during British Raj showcasing the same discipline, fearlessness and determination with their attire. The collection surely shapes the bygone era with élan, which The Imperial is known for.” He further said, “An iconic hotel with a unique blend of Victorian and old colonial magnificence, The Imperial holds a strong relevance with the understated and elegant spirit of the collection, like no other.” 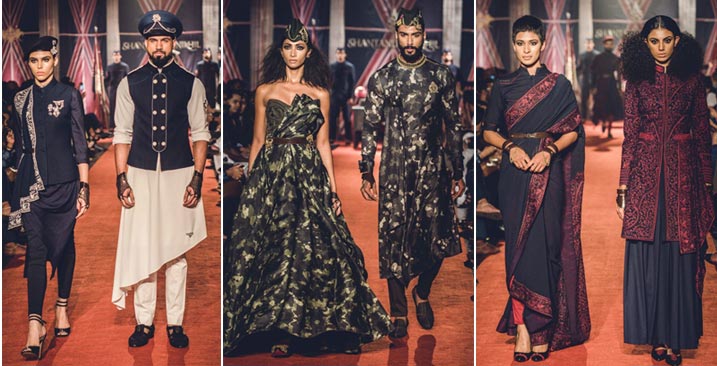