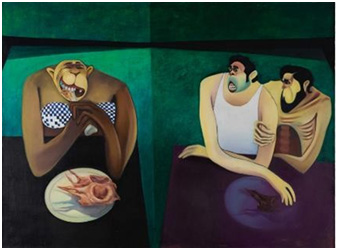 Over three decades, Swiss collectors Guy and Helen Barbier assembled one of the most important collections of 20th century Indian art in private hands. Brought together by singular enthusiasm, passion and commitment to discovering and celebrating Indian art, and through friendships with many of the artists they admired, the collection reflects the very best of Indian art of the last century. In 1987, their passion evolved into an exhibition titled Coups de Coeur, under the auspices of the Festival of India, Switzerland/Geneva.

Now, thirty works from the collection will be offered at Sotheby’s in London on 10 June 2019 in a dedicated sale. More than two thirds of the artworks were acquired directly from the artists themselves, and none have ever been offered at auction before. The offering constitutes one of the most significant of its kind ever to come to auction since the inception of the Modern & Contemporary South Asian Art auction category at Sotheby’s over 25 years ago.

Highlights include Bhupen Khakhar’s landmark Two Men in Benares, unanimously considered one of the most important works by the artist; a rare figurative work by Ram Kumar, Untitled (Man and Woman Holding Hands) intended as a gift from the artist to his wife; a rare early work from one of the leading Indian artists at auction Tyeb Mehta; and one of the best collections of works by Rameshwar Broota in private hands.

In the words of Helen Ann Barbier: “The Barbier Family Collection began with Guy Barbier’s first visit to India in 1978. It was a journey that introduced him and later me, and then our children, along with all those who were welcomed to our home; to our collective love of the country — in all its myriad manifestations – and in particular to India’s modern and contemporary art. It was a ‘Coup de Coeur’ which roughly translates to a shock to the heart but is a way of saying ‘love at first sight,’ or a stroke of passion.

The collection began with curiosity and passion as a journey of inquiry that extended to cherished friendships over the past four decades with collectors, artists, gallery owners, professional critics, museum curators, writers and poets.  Each trip we made to India and in-between was defined, orchestrated and characterised by hand-written correspondence between collectors, artists, and gallery professionals whether to arrange transport, share slides, or to be informed of a new work, or a new artist upon the scene.

The legacy of the Barbier Family Collection is our tribute to India and the brilliance of her culture and the people; in particular to the artists. It was our love affair with a place and time and culture. We wish every joy and happiness to those who take the baton of this cherished collection.” 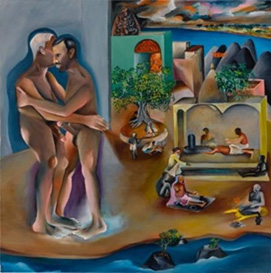 Two Men in Benares (1982)
Oil on canvas, 160 x 160 cm., est. £450,000-600,000
When Bhupen Khakhar unveiled Two Men in Benares (1982), he became the first Indian artist to freely disclose his sexual orientation through his work. With this ‘confessional painting’, in which he painted himself (recognizable by his trademark shock of white hair) entwined in a naked embrace with another man, Khakhar announced his sexuality to the world.

Shock waves followed the first unveiling of the work at the Chemould Gallery in Mumbai in 1986. Critics decried the promiscuity, there were protests from the Cottage Industries authorities (on whose premises the gallery was located), and two days after the exhibition opened the gallery owners were forced remove the canvas from view. Thirty years later, in 2016, the work would star in Tate Modern’s You Can’t Please All exhibition of the artist’s work, the first retrospective of an Indian artist to be held at Tate Modern.

Guy and Helen Barbier treasured the painting ever since acquiring it from the controversial 1986 Mumbai show to save their friend and gallerist – Kekoo Gandhy. This is the most important work by the artist to come to auction since De-Luxe Tailors from the collection of Howard Hodgkin set a new £1.1 million world record price at auction at Sotheby’s in 2017.

Ishrat Kanga, Specialist in Modern and Contemporary South Asian Art and Head of Sale, said: “Bhupen Khakhar has received significant international and institutional critical attention, with exhibitions at many illustrious venues across the world. His works are the result of an artist bravely portraying his ethos and beliefs, making use of a myriad of sources from his life in an unabashed way to express his own honest narrative of love and desire. ‘Two Men in Benares’ is a seminal work, both for the context it was made in and its powerful and complex imagery. In equal parts it is subversive, sensual and sentimental.” 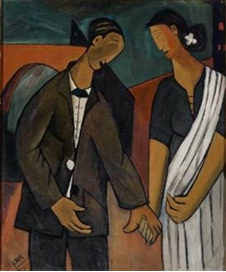 Ram Kumar, Guy and Helen Barbier were close friends, and the artist even sent his son Utpal to stay with the Barbiers in Switzerland for a few months. Untitled (Man and Woman Holding Hands) is a rare figurative work by an artist who dedicated the majority of his long career on abstract art. It had originally been intended as a gift from the artist to his wife and hung on the wall of the Kumar home, but because of the Barbiers’ hospitality and generosity, Ram Kumar sold them this painting in 1985-6. 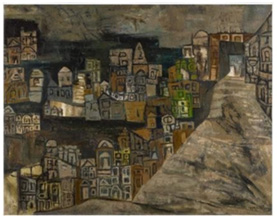 Varanasi (1967)
Oil on canvas, 76.1 x 96.8 cm., est. £100,000-150,000
Acquired directly from the artist in 1982, this painting has not been seen in thirty years, since 1987. From Ram Kumar’s celebrated Varanasi series, the painting straddles the boundaries between abstraction and realism. With its sombre hues and dark shadows, this haunting vista matches the mystery of the sacred city itself. 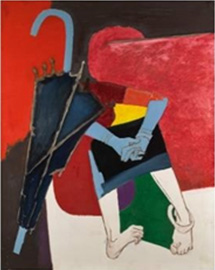 Acquired by the Barbiers the year it was painted, this work hails from the artist’s Portrait of an Umbrella series in which Husain explores what the umbrella could mean as a metaphor to different people. For example, the artist’s grandfather who used to take him to school ‘umbrella in one hand and Maqbool’s hand in the other,’ the vegetable seller protecting her son from the scorching heat, and Queen Victoria and her favourite manservant with an umbrella. Here we see a village woman whose face is obscured by the umbrella. 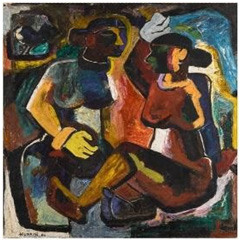 The current painting belongs to the body of work that Maqbool Fida Husain produced between 1948 and 1951, the time of the formation of the Progressive Artists’ Group. The relationship between artist and his childhood is crucial to the understanding of this period of Husain’s work, when his painting was informed by the colours and forms of the brightly coloured traditional Indian toys. 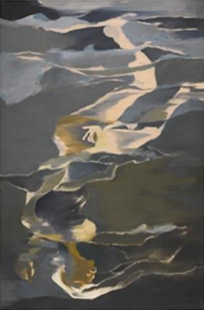 Krishen Khanna is one of South Asia’s most eminent modern masters. Acquired directly from the artist, the painting comes from his early 1970s series, Concerning a Drowned Girl, inspired by a haunting poem by Bertolt Brecht in which a girl is described slowly descending into the sea. This painting is consistent with many other works by Khanna in terms of its engagement with identity and politics and can be read as a metaphor for the ills afflicting Indian society more generally. 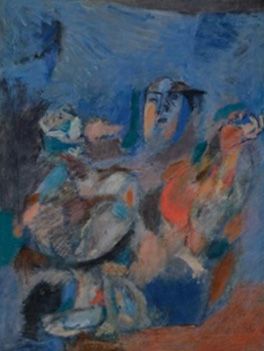 This is a rare early work from one of the leading Indian artists at auction. Mehta, like many artists of his generation had been witness to the tragic events that took place in India during and after Partition and his memories of this period had an immense impact on him and the vocabulary of his art. Growing up in the Muslim area of Bombay as a member of the Dawoodi Bohra minority, Mehta empathised with the marginalised. His art is a contemplation of suffering and shows an empathy with human anguish which he witnessed. Characteristically of Mehta, the focus here is on a single figure. Despite the distortion of limbs and the inherent violence of the imagery, the potency of Tyeb’s work lies in the balance of harmonious tones and lines within a deceptively simple composition.

The Barbiers assembled the single most important collection of Broota in private hands. Spanning several decades from his earliest paintings, five works bythe artist will be offered here, all of which were acquired directly from the artist. Broota’s paintings are relatively rare,given that his painstakingly painterly process could take several months to complete. Since the beginning of his career, Rameshwar Broota has scrutinized the human condition through series including The Ape series, pictured here.