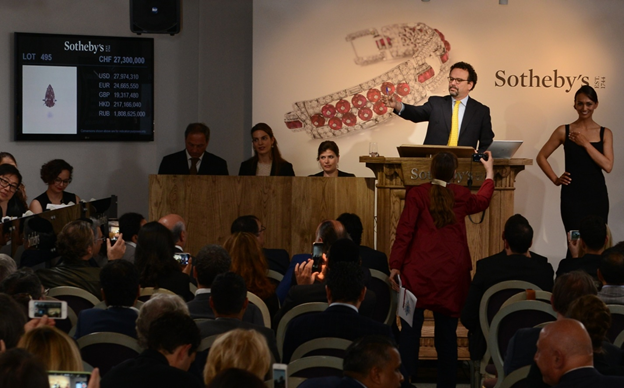 Another record breaking factor at this live auction was when an online bidder bought a pair of important pear-shaped fancy blue and fancy orangy-pink diamond earrings for $6 million / CHF 5.9 million. Online purchases at the auction were up by 41% as compared with the equivalent sale last year. 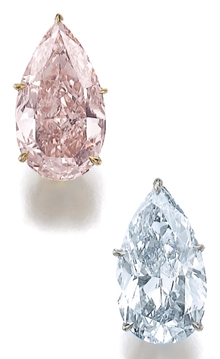 ‘Unique Pink’ diamond weighing a mere 15.38 carats, has received the highest possible colour grading for a pink diamond from the Gemological Institute of America (GIA), and has been found to be Type IIa, displaying “exceedingly pure structure”. The stone’s exquisite pear shape and brilliant cut accentuate its exceptional saturation, placing it in a rarefied category even among the world’s most beautiful diamonds.

Sotheby’s Geneva had one of the highest levels of participation for any Jewelry sale at Sotheby’s. People from 155 different countries viewed the catalogue online, ahead of the sale. And participants came from 45 countries, with 25% from Asia alone. The rough diamond which yielded the “Unique Pink” was cut and polished by Cora International, 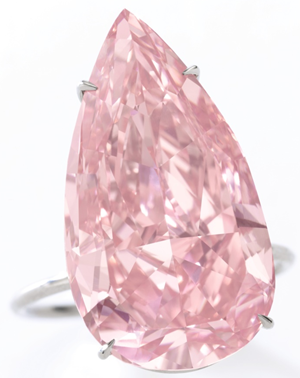 known worldwide for rare and unique diamonds of large sizes and vivid fancy colours. According to the GIA, “Although nature is largely to thank for the Unique Pink’s most striking and unusual attributes, the work of its cutter must not go unnoticed. The task of polishing the valuable rough crystal into the sparkling gem it is today required tremendous skill.” The discovery of any gem-quality pink diamond is extremely rare. Of all diamonds submitted to the GIA each year, no more than 3% are classified as coloured diamonds, and less than 5% of those coloured diamonds are predominantly pink. Upon inspection by the institute, the hue, tone and saturation of the “Unique Pink” was determined to be Fancy Vivid Pink – the strongest saturation possible and described as “absolutely mesmerizing”. “It is exceptionally rare for any natural diamond to reveal Fancy Vivid Pink color, but for one of 15.38 carats to exhibit such tone and saturation is astonishing.” GIA Monograph written for the “Unique Pink”, 2016.

Speaking after the sale, David Bennett, Worldwide Chairman of Sotheby’s International Jewellery Division, commented: “Exactly one year after having set the world record for a jewellery sale, Sotheby’s Geneva has raised the bar once again with a great sale and a great result for the Unique Pink. It is difficult to imagine a diamond that better illustrates the term Vivid Pink than this outstanding stone. The colour is simply astonishing and, for its size, it is in my experience truly unique. We set out to curate a sale that would speak to today’s collectors and the response has been overwhelming – confirmation, if ever it were needed, that when you have the right material, demand is as deep as it’s ever been. This was a sale that had the perfect mix of great gemstones and jewels, the vast majority of which were sourced from private collections.”