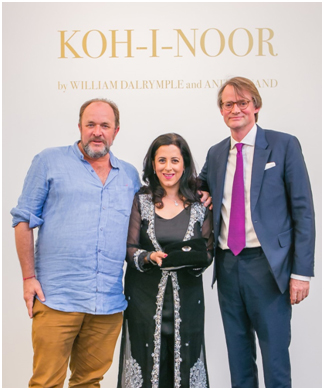 Anything relating to an extraordinary gem, especially one such as the Koh-I-Noor diamond, would certainly be of interest to Sotheby’s. On Thursday, 1st  June, 2017, Sotheby’s hosted a reception and talk by William Dalrymple & Anita Anand, the authors of the book ‘KOH -I-NOOR, The History of the World’s Most Infamous Diamond’,  in London. The authors have traced the Kohinoor’s back story spanning several centuries, and what emerges is not just the tale of a very valuable gem but a narrative of greed, and of ambition. Of men who coveted, and of men who caved in.

For the occasion Sotheby’s had a replica of the original uncut Koh-I-Noor diamond on display, the receipt for the formal transfer of the diamond from the royal Sikh treasury to the governor general of India along with a selection of related paintings as well as a display of jewelry from their forthcoming sales. 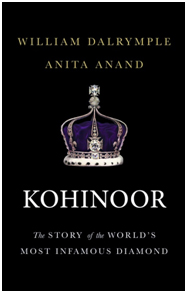 The intimate evening was hosted by Edward Gibbs, Chairman, Sotheby’s India along with other directors at Sotheby’s. Leading figures spanning the corporate, literature, entertainment and the art worlds came together for the occasion, including esteemed guests Nicholas Coleridge, Olivia Dalrymple, Gurinder Chadda, Jeremy Paxman, Roger Kaverne, Pooja Patnaik, LekhaPoddar, Ishrat Kanga, Chandru Ramchandani and many more. Lively conversations over cocktails and canapés unfolded against a backdrop of art and literature.

The interesting facts revealed in the book, are nothing that can be found on the Wikipedia page of Kohinoor diamond. It seems the gent that Lord Dalhousie commissioned to research about the diamond was one Theo Metcalfe, who based his findings on local gossip and popular myths.

William Dalrymple is an acclaimed historian and a bestselling and award-winning author whose books include City of Djinns, White Mughals, The Last Mughal, Nine Lives and Return of a King.

Anita Anand has been a radio and television journalist in Britain for over twenty years, presenting major programmes on BBC. Her first book, Sophia: Princess, Suffragette, Revolutionary, is a highly acclaimed biography of the daughter of Maharaja Duleep Singh, the last ruler of Punjab, who was forced to hand over the Koh-i-Noor to the British after they annexed his kingdom in 1849.