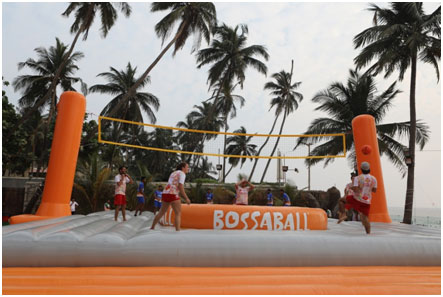 A uniquely acrobatic and energetic team game, Bossaball – brainchild of Filip Eyckmans, launched in India for the first time. Bossaball International (by Filip) has collaborated with Rohit Khandelwal’s SCK Sports and Entertainment as a partner to bring Bossaball to India and tied up with Roots Football Academy. The Mumbai launch of the brand kicked off with an exclusive one-day premiere face-off match among the Indian team, as well as two international teams. Khandelwal describes Bossball as ‘The ultimate mix of soccer tricks, volleyball skills and gymnastics topped with exotic tunes’.

Founded in 2005 in Spain, the sport is innovatively created and an effective full body workout. The word‘Bossa’, translates to style, flair or attitude in Portuguese, is commonly associated with Bossa Nova – asamba influenced type of Brazilian music. The name Bossaball, thereby, fits perfectly as it aims to combinesports, music, positive vibes and 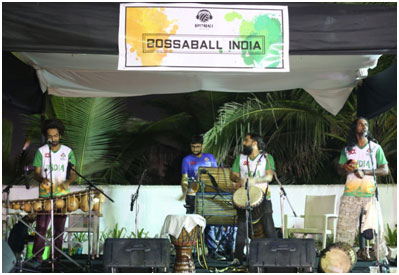 Blending elements of volleyball, soccer and gymnastics, this distinct sport creates a dynamic atmospherewhere the body movements flow harmoniously to the beat of the music. Bossaball events are spectacularand fun, not only for the players but for the audience to enthusiastically partake in.The sport is played between two teams on a specially designed inflatable platform integrated withtrampolines in the center which takes less than 45 minutes to set up, and upbeat Bossa Nova tunes thatsets the rhythm of the game. The change in gravity, combined with the safety provided by the inflatablesurface, allows a new range of techniques, team tactics and acrobatic movements to hit the ball with flipsand turns in the air. Bossaball is overseen by a “samba referee” whocon currently takes on the roles of Master of Ceremony and DJ.

Four players on each side of the net – The attacker leaps high on the trampoline – the other three players set up the rally – maximum of five passes allowed. The trampoline jumpers’goal is to ground the ball on the opposite side by spiking the ball with either his hand or foot. Bossaball is for all ages with an exclusive program offering specificexercises for everyone to enjoy the sport. 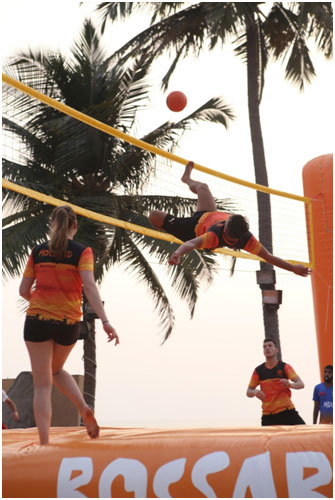 Filip Eyckmans, Founder of Bossaball said, “Bossaball is already played in countries like Belgium, Spain,Netherlands, Brazil, Latin America and others.we are looking forward to Bossaball’s success in India. Weplan to set up a number of courts across Mumbai and target other tier 1 and tier 2 cities in the comingyear.”

The Belgian polyglot Filip Eyckmans founded Bossaball Sports S.L. in 2005. He had been residing inSpain for more than 10 years. As a youngster, he was a tennis player in the national team of Belgium spending his spare time attending soccer matches and DJ-ing at private parties. As former manager of music bands such as Vive la Fete and dEUS, Filip Eyckmans often travelled to Brazil where he was over whelmed by the Afro-Brazilian phenomenon capoeira on a suburb square of Recife, which gave birth to the idea of Bossaball. In 2016, the headquarters of Bossaball collaborated with the International Volleyball Federation FIVB and displayed the new sport during the Olympic Games in Rio de Janeiro, rightin the heart of the panoramic Copacabana beach. The especially organized Bossaball tournament featured five national teams and highlighted the FIVB’s activities on the Copacabana. Of the team of the Netherlands, who took home the win in Brazil, one player will take part in the Bossaball launch in India.