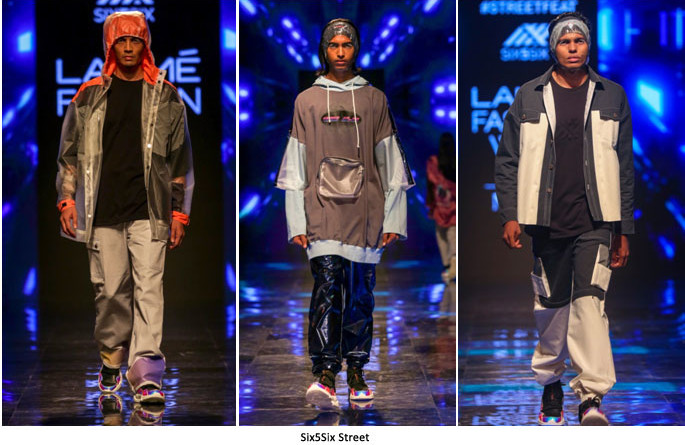 Men’s wear in 2019 is nothing like it was a a few decades ago. It is good-bye to the crisp white shirt and navy blue trousers. It is auf Wiedersehen to the casual shirt with the manila collar. It is farewell to the 2 or 3 piece suits in masculine hues of brown, navy and pinstriped black. Now say Hello and Welcome to the new genre of men’s wear that is taking the fashion world by storm. The male dresser is prancing like a peacock in his coloured attire and leaving his glamorous female counterpart in the shade.

Celebrating 20 years of Lakme Fashion Week, the recent Winter/Festive 2019 edition unveiled men’s wear that now fell into four different categories that left the staid formal and casual wear segments far behind. Designers went into over drive as they showcased some unconventional looks. 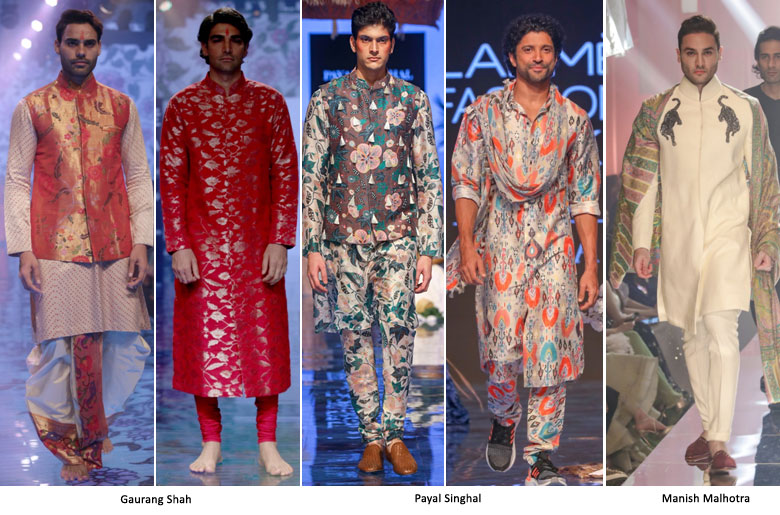 Traditional dressing is still very much a part of the male DNA especially when it comes to the festive and bridal seasons. Men want to stay true to their roots. So the dhoti, kurta, bundi trio does appear but now in dazzling brocades. 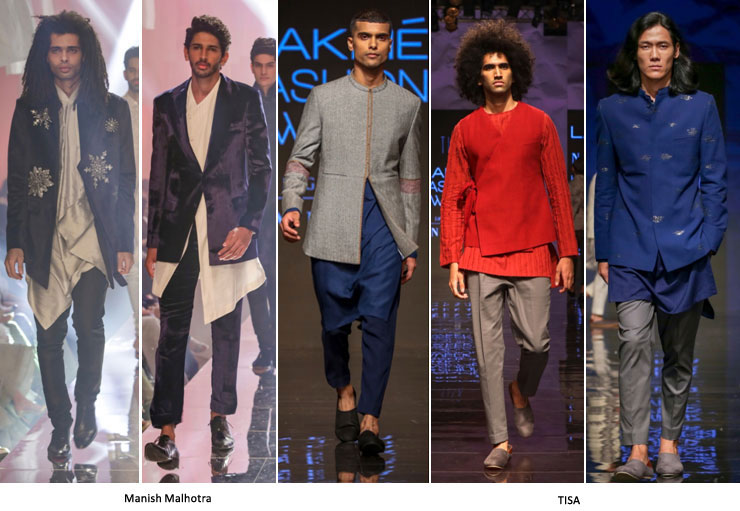 So Paithani or ikat weaves are what designer Gaurang felt the men should dress up in. Manish Malhotra stayed true to the kurta but gave it an asymmetric hemline and teamed it with embroidery, a button less jacket or a sherwani with impressive embellishments. Payal Singhal dressed her men in all over boho prints to match her women’s wear. But the TISA label stayed sober in silhouettes but felt fiery red was a great colour for cross over closure bundies and mini kurtas.

SUITS WITH A DIFFERENCE 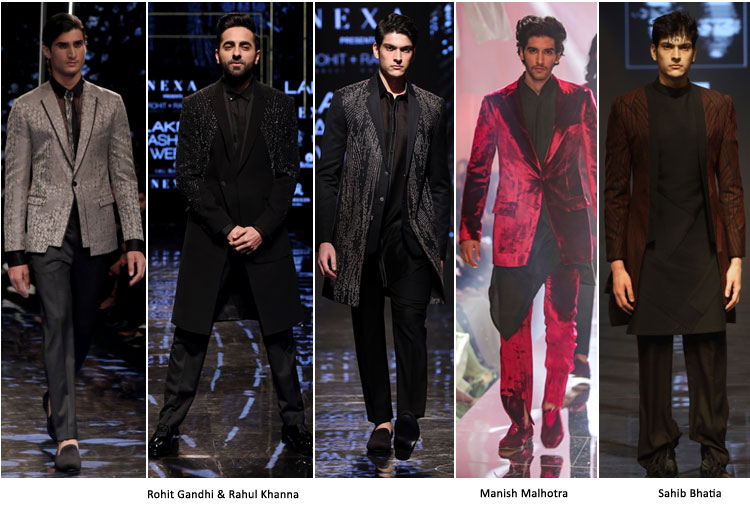 We are back to the suits but they are nothing like the single or double-breasted versions of the past.  Kunal Rawal’s jackets are a cross between the bundgala and western jackets with mandarin collar and four-button closure worn with jersey leggings and hip length shirt. His waistcoats turned into mini versions over long shirttail kurtas, which looked dapper with slim trousers. Rohit Gandhi and Rahul Khanna had a one-button jacket with a layered front addition that was all in shimmering silver. Another look from the designing duo revealed a long line black jacket with discreet shimmer on the shoulders and back worn over a kurta and fitted pants.  Manish Malhotra opted for magenta velvet for a one-button jacket and matching trousers teamed with an asymmetric black kurta. 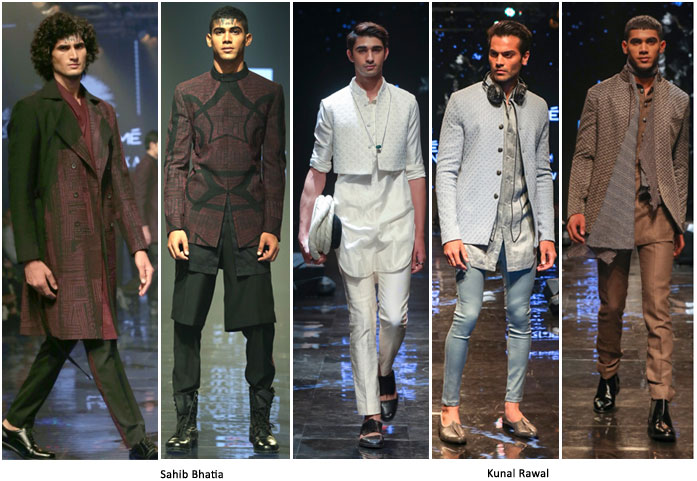 Gen Next men’s wear designer Sahib Bhatia added extreme detailing in muted colours for jackets and layered them over shirts and funky trousers. He continued the inspiration for long or short jackets with a discreet shimmer. 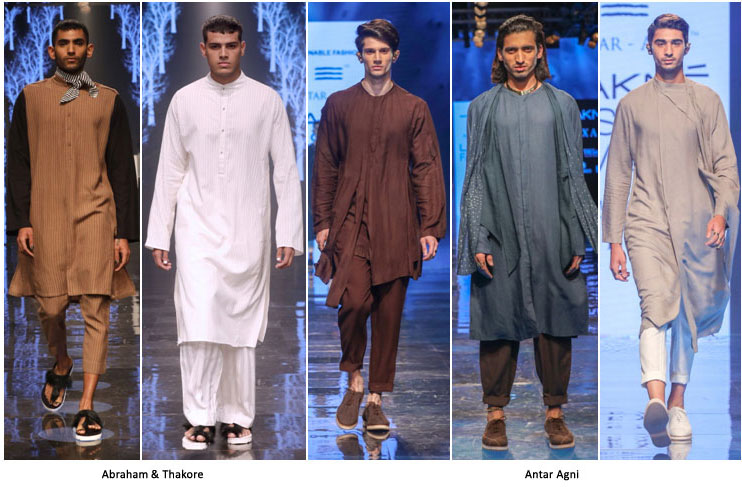 Moving onto a slightly more adventurous path fusion fashion for men was the ‘in’ thing. Designers Abraham and Thakore gave a western touch to the Indian kurta teaming it with comfy loose pants. The designers also felt that comfort was of utmost importance so the baggy sack tunic that was colour blocked in two hues of brown and black worn with calf length capris would be ideal men’s wear. Antar Agni who changed the way Indian men dress a few years back, had draped asymmetric kurtas and cropped pants that would be even coveted by the fairer sex. So the unisex wardrobe was an ideal option for fashionable couples that want to dress on a budget. 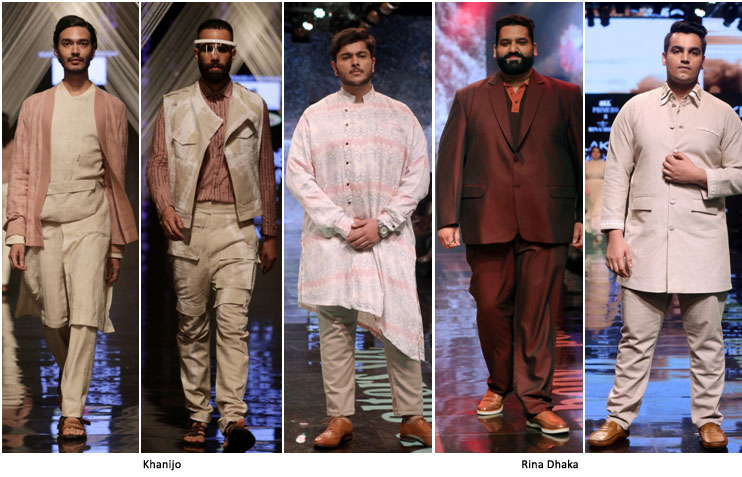 Khanijo’s men’s wear was very flexible. It offered long tunics with slim pants and simple button less jackets. On the other hand the label went funky with multi pockets for trousers and biker waistcoat over printed Khadi shirt. Designer Rina Dhaka felt that the portly male also needed some excitement in his wardrobe so she brought in the asymmetric, off-centre, closure kurta and a simple 2-button jacket with notched lapels but in a showy wine tone and teamed it with a trendy T shirt. She even felt that a long line 6 button jacket with a contrast collar would add a style quotient for the plus size dresser. 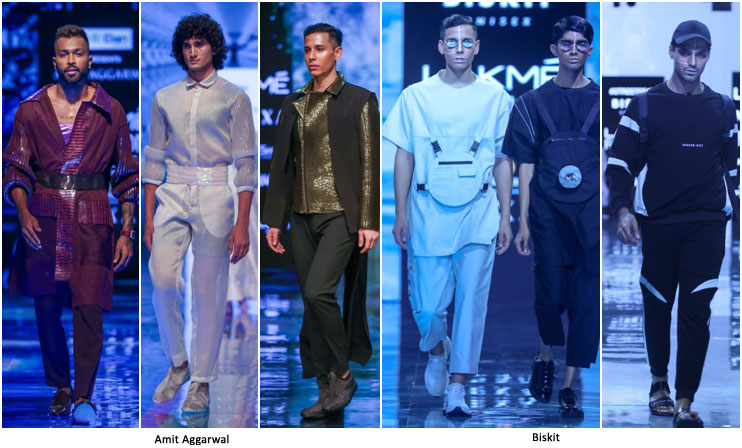 Finally, funky fashion has arrived on the men’s wear charts and it’s aimed at the adventurous young super active dresser who wants to make a show stopping entry wherever he goes. This look is not for the faint of heart but for the male dresser whose personality and confidence surrounds him as he announces his entry. For this category, Amit Aggarwal gave the New Age man what he wants. His polymer stripes, intense detailing and unconventional silhouettes were visually arresting options. His jackets were ready for a surreal look, while his white shirt with micro pleating teamed with matching trousers detailed with giant patch pockets could create a fashion stir. His glittering cropped biker with a black waistcoat and trail was an eye-catcher. 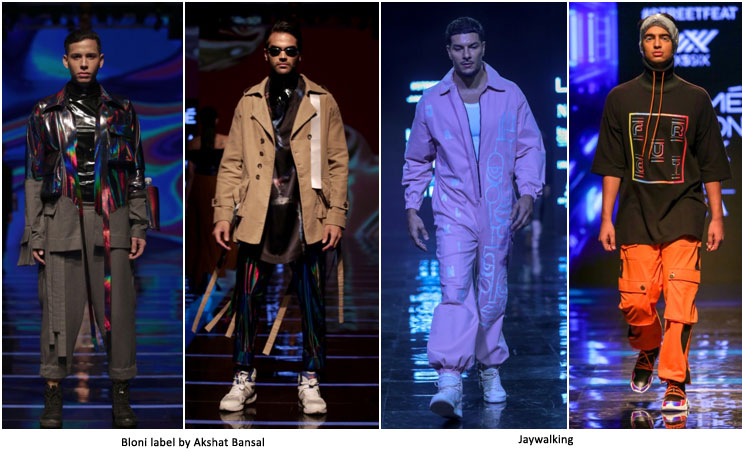 The Bloni label by Akshat Bansal believed in shock and awe; so recycled Econyl made from marine waste that had an iridescent reflective glow in the dark along with latex fabrics, Merino Wool recycled nylon and hard nets were the base for his wildly colourful jackets with outlandish, pockets, fabric streamers, extreme silhouettes detailed to present a great mix and match story for the young hyper energetic dresser.

The new street wear hip-hop, R & B type of clothing seems to have taken the millennial male dresser by storm. Labels like Jaywalking are a favourite of Bollywood star Ranveer Singh when he was promoting his hit movie Gully Boy.  The brand claimed that the garments would change the wearer’s life. It’s chunky fabrics; colour-blocked, over-sized, fashion projected a cool look featured boiler suits, bikers plus size T-shirts and baggy pants. 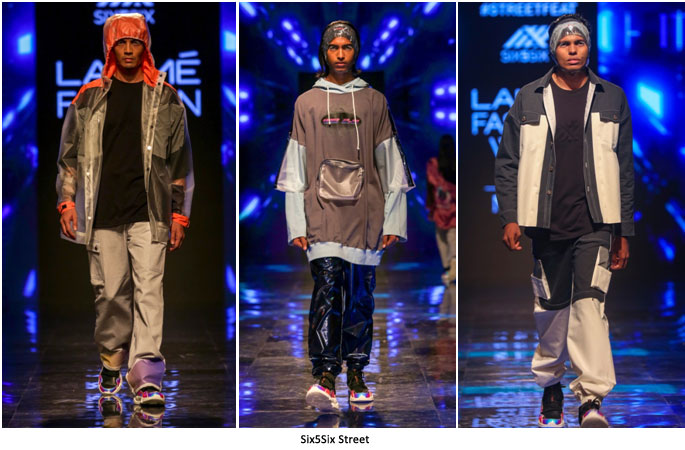 The Six5Six Street label was another street wear favourite, while Biskit was the brand that offered unisex clothing for Him and Her with a Space Age inspiration. Here were clothes that ensured extreme comfort, coupled with an outlandish fashion direction that would be suitable to dressers who enjoy making a spectacle of themselves wherever they go.