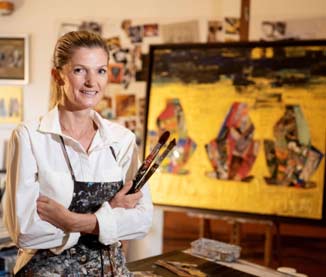 “Colour is a power which directly influences the soul,”said the famous abstract painter and art theorist Wassily Kandinsky, in his book ‘Concerning the Spiritual in Art’, (1911), going on to predict the emergence of abstract art as the purest form of influence on the human soul. I have found the representation of these Kandinsky’s words in the works of French artist Stephanie Arpels, from before and after she travelled from Paris to India.

My first meeting with Stephanie Arpels was ahead of her solo art exhibition at the Alliance Francaise in New Delhi, India in 2017. The abstract contours of the female torso, curves and angles, in muted shades, dominated the theme of her canvases, as also the large canvases in blacks and greys, reminiscent of Pierre Soulages’s works. Since then, Stephanie has made Delhi her home. Travelling across India, soaking in the burst of colour in the heartlands of Rajasthan, the artist in Stephanie continues to represent the real women in her canvases. There is a sense of joy, a brighter colour palette. The inward journey is palpable, and the spiritual connection takes on a new direction. The quest for answers, to understanding the mysterious silhouettes of women squatting with their faces turned, has begun to reflect in the new directions, a new trend. The women are bolder; they are up and walking, sometimes in groups or alone, not so shy anymore, faces visible, set against a more significant backdrop. 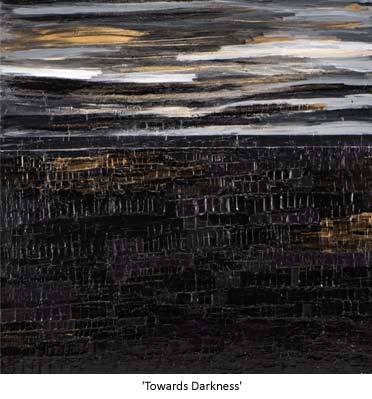 The American Nobel laureate and Pulitzer prize winner William Faulkner was not a painter, but commented aptly, “The aim of every artist is to arrest motion, which is life, by artificial means and hold it fixed so that a hundred years later, when a stranger looks at it, it moves again since it is life.” Stephanie’s rural women are awakening and connecting with her. Yet, I had questions for her, ahead of her upcoming solo ‘Women Passing’, from 6 – 9 December 2019 at the Visual Art Gallery, India Habitat Center in Delhi.

From the first of your Indian series of women huddled together with their backs turned, to walking in groups, reflects a change. Now there is a distinct shift again. Please share your thought process or inspiration for this change.

Yes, I have indeed introduced faces in my newer work. This was to render my women more human, more real, further emphasizing the contrast with the undefined dimensions where they are. They are passing in our world and fly away; they walk towards something else, another world, and another life.

These women reflect the association of my French origin with my Indian life, for which I have relied on collages of works by European and Indian masters such as Souza, Hussein and Raza, to give an identity to my women.

How has India affected your artistic journey in your new canvases, particularly the prominence to the different landscapes, which form the backdrop to these women?

The four years since I arrived here, the influence of India in my work, is important. I have travelled from North to South, to Kashmir, Rajasthan, Kerala, Tamil Nadu, and been observing and absorbing. I have been inspired by Rajasthan, and more particularly by textures and patinas of the blue city of Jodhpur, by Amber Fort in the pink city of Jaipur. The winding alleys leading to Mehranghar Fort and Amber Fort give me the impression of paths with no end.

I have also been equally inspired by the Himalayas, the immensity created by white snow in winter, which obliterates the planes, the valleys and distances where I can set in suspension my women. Ladakh too inspires me in my imagination, although I have not yet visited this region.

All of these places allow me to imagine another world, another dimension; the future world where my women are heading for. 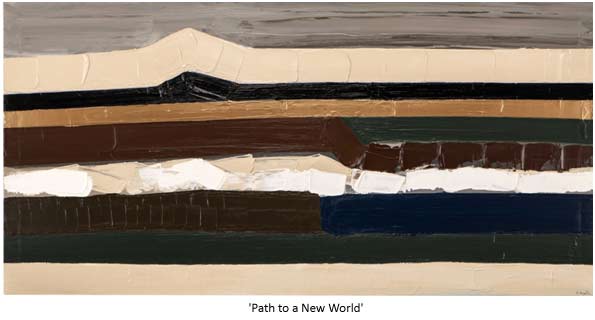 Do you see you art as a metaphor for women across the world?

Coming from France, the land of my origins, and now living in India for four years, I am becoming more aware of the profound cultural differences, the behaviours, and traditions. My focus is on Indian women that I wish to make more important. I associate European and Indian masters to represent the two cultures that inspire me. 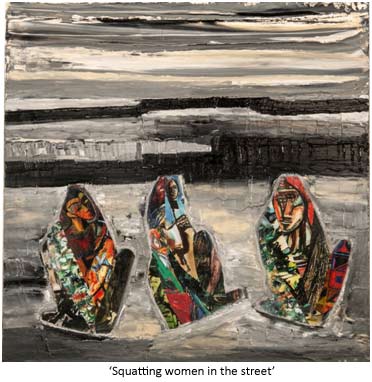 As a sensitive artist, how have you coped with the extremes that India is?

I have been stunned and moved by life in India.I have seen closely the poverty through my NGO work and the differences in human conditions. While women do not have the same fortune here, it seems that religion and spirituality guides them through this life waiting for the next.

Each day, at road crossings, I observe squatting women going on with their lives, taking care of their children, while they wait endlessly.It seems to me beyond belief to live in such dire conditions while remaining gracious and smiling.

In parallel, I also have been meeting women that have been raising their voices in the layered society that surrounds them, and single mother entrepreneurs who provide for their families which seems to show the evolution of the country.

Your canvases already hang on walls in some very prestigious addresses in India and Europe. Does the commercial success interfere with your creative process?

Not at all.This said, while it is always difficult to part with my paintings, like a child who leaves home, I am very fortunate to know that my works are appreciated and hang in the homes of important collectors.

“THE ‘INDIA STORY’ IS GAINING MOMENTUM”

Reader Review- ‘The Bible, Manual and a Toolkit’

HE COTERIE – An Indian Fashion Expose

Trekking Tales and Life’s Lessons- Beyond the Mountains:...

PUT ME IN THE RIVER