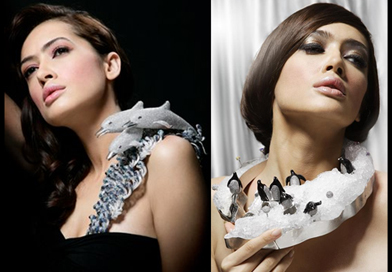 Laksh Pahuja has always believed in creating exciting astonishing jewellery and his collections at the India International Jewellery Weeks in 2010, 2012 and 2014 had his characteristic stamp of designs that have baffled the viewers.

Each creation is termed as a magnum opus by Laksh Pahuja who has stuck to his motto to craft unique amazing jewellery pieces, which just have to be “one of a kind” and will undoubtedly make a stunning fashion statement.

Laksh’s collection “Floral Fragrant Adornment” had a line of elegant earrings in gold and diamonds with shapes varying from floral, fan, and spear to spider. Laksh added to the momentum of pieces with a few sets in intricate moulded shimmering gold for collars having interesting pendants and then unveiled his “talk of the town” collection pieces, which have left people spell bound.

“For me jewellery designing is much more than presenting pieces for the neck ears or arms it has to make the viewer think and be completely different from anything that is available in the market,” reveals Laksh.

An arresting necklace of gold medallions with the nine painted faces of Raavan and one blank at the back could be a non-stop conversation piece. A huge dragon butterfly necklace complete with colourful wings and a giant cubic zirconia diamond dangling at the end has given the audience a creative jolt at shows.

His two pieces that were in the finals for the Solitaire Award 2010 – the Gandhi’s Vision Necklace with glass lens and the minarets armlet are amazing in craft and intricate detailing.

His collection of necklaces comprises painted hands on a firm moulded round necklace with a distinct African feel; another has the twirling white gold and pearl vines on the calf of the model and the gold mojris were totally “out of the box” design directions.

Laksh’s pieces are all literally showstoppers like the time he had the live fish in the necklace and the giant pink dolphins from River Amazon leaping in the water perched on the shoulder of the model as a brooch, which gave a social message to save them.

Laksh Pahuja has proved that he has always been the innovator who is not afraid to tread on the unknown path. His inspirations are ever unique as he constantly pushes the envelope to amaze the viewer. Blending tradition with modernity, Laksh has created memorable pieces under his signature trademark.

Outstanding creativity comes naturally to Laksh, who crafted eight masterpieces for his next collection that evoked thunderous applause from the audience. Calling his collection “Patriotism, Peace and Passion” dedicated to the nation; the pieces were inspired by the happenings in Indian history.

A tribute to heroes like Bhagat Singh, which was a medallion modelled like a flame with the hero’s head in the centre was called “Shaheed”, while a tri-colour necklace dedicated to singer Lata Mangeshkar with the singer’s face on the imposing pendant was called “Ode to the Nation”.

The Shunk or shell was turned into an imposing gold and diamond studded hair ornament for a chignon and named “Crowning Glory”.

Even chess Grand Master Vishwanathan Anand was the inspiration for a metal helmet with enamel work, which had chess pieces, with the champion’s figurine in the centre and called “Prime Czar”.

China was the inspiration for the piece called “Year of the Dragon”, which was a silver and gold fire spewing dragon head piece that curved on the model’s head. Wanting to send a message about saving the earth and its protection, Laksh had a necklace with cotton on a gold base with tiny penguins running on it called “Just Freeze”.

Bollywood was also an inspiration where a spool of raw film was turned into a thick silver bangle dedicated to yesteryear stars Shammi Kapoor, Dev Anand and Rajesh Khanna and called it “Cinematic Century” to celebrate the hundred years of Indian cinema.

The legendary Titanic ship inspired Laksh into creating a diamond and silver model of the ship draped as a necklace over one shoulder and called it “Timeless Titanic”.

As a tribute to women and the cause of breast cancer the silver lattice leaf brooch design had diamonds on the edge and called “Think Pink”.

Iconoclast Laksh Pahuja is a relatively new entrant in the jewellery industry but has already created a stir among connoisseurs and trend setters. A designer with many facets and as many dimensions, Laksh is unrivalled in the lexicon of Indian jewellery design for his sheer creativity and innovative approach.

His latest work has 15 pieces comprising a collection of seven finely crafted cuffs and bangles in 18K and 22K gold studded with diamonds and coloured stones.

The amazing creations had delicate trellis work moulded into gentle curves on the wrists of the graceful models. Strands of gold twirled around for wide cuffs while precious stones interspersed the gleaming gold as it criss crossed encrusted with diamonds. Held together for a trio of bangles the design gave a flexible accordion like effect to the piece.

The second part of the show consisted of seven iconic pieces from the past collections by Laksh. The finale was the hair piece covering a chignon inspired by the Palm Jumeirah in Dubai showing a bird’s eye view of the iconic location that ends with a falcon, the national bird of UAE perched on the head of the model. The one kilo hair piece was created in gold and silver, encrusted with superb rubies, sapphires black/champagne diamonds, cabochon moonstones and coloured enamel work. It was undoubtedly a masterpiece once again created by Laksh Pahuja worthy of being the perfect showstopper.

“I look for this magical union which results in the creation of exciting, astonishing jewellery and collections that bear the characteristic stamp of innovation, meant to Intrigue both the minds and eyes of the audience,” concludes Laksh Pahuja.