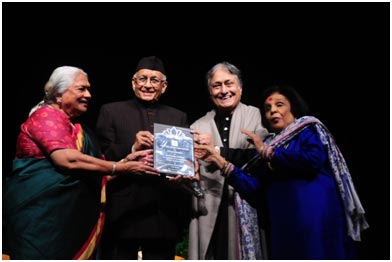 Shriram Bharatiya Kala Kendra presented the ‘Sumitra Charat Ram Award for Lifetime Achievement (2018)’ to Ustad Amjad Ali Khan on Saturday, November 17th, 2018 at the Kamani Auditorium. Shobha Deepak Singh, the powerhouse who has uplifted the cultural scenario in Delhi with her fabulous classical dance dramas and given a new life to theater and the performing arts, aptly said, “The most important thing that India has to give to the rest of the world is simply its Indianness. If it is substituted with a cosmopolitan veneer, India will come before the world empty handed.”

Ustad Amjad Ali Khan is a renowned maestro of Hindustani Classical Music, who became a legend in his own life time. His name is synonymous with Sarod. Ustadji represents the sixth generation of a family of distinguished Sarod players. He has taken his art to every nook and corner of the world during the last fifty years, winning a large following for himself and for Indian classical music. He has received numerous honours and awards including the Padma Vibhushan from the Government of India and the Fellowship of the Sangeet Natak Akademi. Among a string of international honours he received, mentioned may be made of the Crystal Award, Unicef’s National Ambassadorship, Fukuoka Cultural grand prize, the coveted Global Music Award and a Grammy nomination. 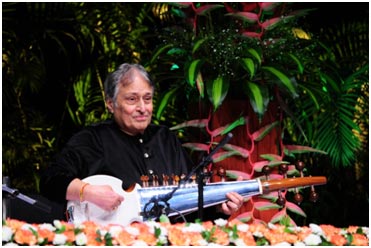 Smt. Sumitra Charat Ram (1914-2011) founded the Bharatiya Kala Kendra in 1952, a college of music and dance where legendary masters of Hindustani Music and Kathak Dance came to be associated as Gurus. It was later renamed as the Shriram Bharatiya Kala Kendra. As its founder, Smt. Sumitra Charat Ram guided the institute with great zeal and passion, which made the Kendra the focal point for dancers and musicians in the capital, a role that it continues to play even today.

For her immense contribution to the promotion of classical Indian arts and culture, Smt. Sumitra Charat Ram was conferred the honor of Padma Shree by the then President of India in 1966.She passed away in 2011 and in honour of her memory the Kendra Management Instituted an Award, which is conferred annually on eminent Artists for their Lifetime Achievement in the field of Indian Classical Dance and Music. 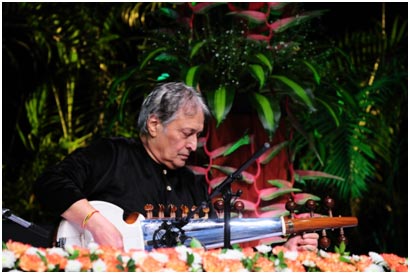 Shobha Deepak Singh (Director and Vice Chairperson, Shriram Bharatiya Kala Kendra) said, “For me personally Amjad Ali Khan has been a guru, brother and fellow traveller in my journey in the world of performing arts. We have been a performer and showstopper at the music festival. We are proud to confer on him the prestigious Sumitra Charat Ram Award.”

The first award was conferred on Pt. Birju Maharaj in 2011 and in the subsequent years, the Award has been given to Smt. Kishori Amonkar, Shri Mayadhar Raut, Smt. Kumudini Lakhia, Pandit Jasraj, Pt. Hariprasad Chaurasia and Smt. Girija Devi.