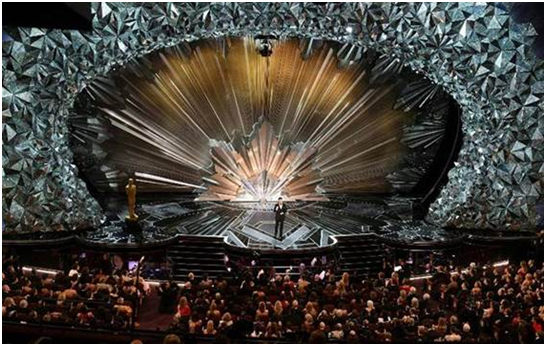 Swarovski created a spectacular set design for the 90th Oscars® on Sunday, March 4, 2018. This was the handiwork of the Tony and Emmy Award®-winning production designer Derek McLane. This year’s show marked Swarovski’s 11th year illuminating the Oscars stage, and the 6th year that McLane incorporated Swarovski crystals throughout the show’s set design. McLane has earned Primetime Emmy Award® nominations for every year he’s worked on the Oscars telecasts and won in 2014.  Key features of this year’s Oscars set design included: a brand-new proscenium; the return of the beloved floating Oscars; and a signature backdrop curtain and opera box covers. 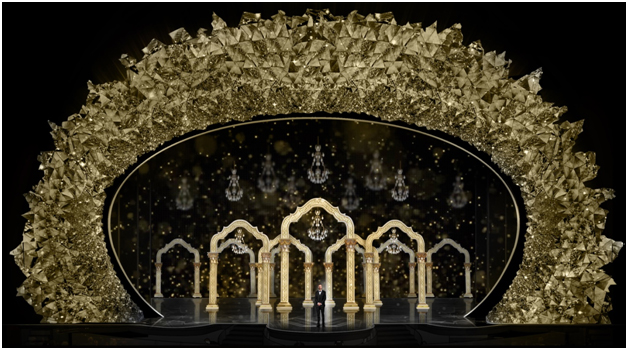 “The Oscars is one of the most glamorous and storied nights of the year, celebrated the world over,” said Nadja Swarovski, Member of the Swarovski Executive Board. “We are proud to collaborate with Oscars production designer Derek McLane to help execute his vision for this momentous 90th anniversary. For generations, Swarovski has demonstrated a dedication to the arts, film, costume designers, architecture and fashion. We strive for symbiotic partnerships and our 11 years illuminating the Oscars stage has been extraordinarily meaningful.” 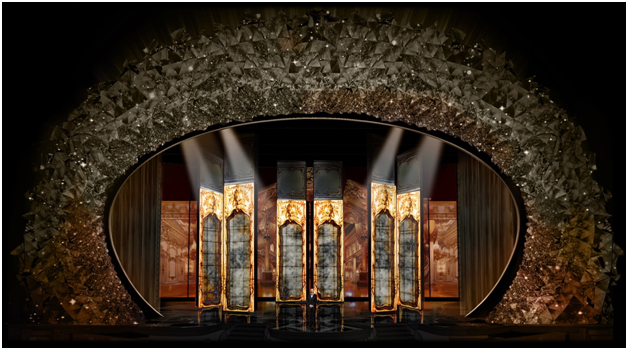 McLane visited Swarovski’s historic headquarters in Wattens, Austria, earlier this year to experience the heritage of Swarovski firsthand. He harnessed inspiration for this year’s set design from the impressive creativity, innovation and craftsmanship showcased in Kristallwelten’s enchanting grounds, educational exhibits and knowledgeable guides. Following his trip, McLane designed a new proscenium for the 90th Oscars featuring more than 45 million crystals. The piece was constructed from octagonal tiles with a mix of crystal, metal, mirror and other materials to achieve its complex and beautiful shape.

Returning for a second year were the spectacular floating Oscars, featuring over 140,000 crystals. The installation also included an original backdrop curtain, shimmering with over 80,000 crystals. Finally, the theater’s opera boxes were once again embellished with over 23,000 breathtaking Swarovski stones. 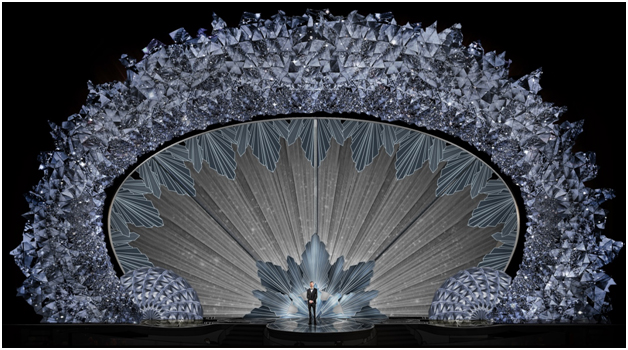 Swarovski’s history on the silver screen goes back to the early days of Hollywood over 85 years ago, when its crystals made their debut in the Marlene Dietrich film Blonde Venus. Swarovski crystals have played a supporting role in some of cinema’s most memorable moments and have dressed its most iconic stars, from Judy Garland in The Wizard of Oz, Marilyn Monroe in Gentlemen Prefer Blondes and Audrey Hepburn in Breakfast at Tiffany’s, to Jennifer Hudson in Dreamgirls, Nicole Kidman in Moulin Rouge! and Emma Watson in Beauty and the Beast.