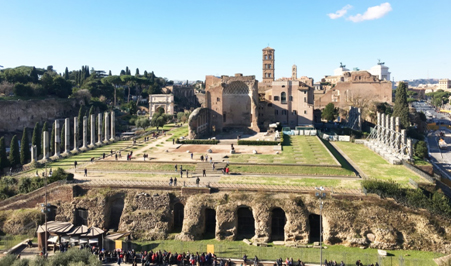 The luxury brand FENDI is highlighting its bond with Rome with several initiatives to support the heritage of Rome and bring the attention on its beautiful locations, by presenting the Couture Fall/Winter 2019-2020 show on July 4, 2019, at the Palatine Hill, where the foundation of the city of Rome is located. The Maison is also financing the restoration and enhancement work aimed at the protection and fruition of the Temple of Venus and Rome, for € 2.5 million. Additionally, FENDI also pays homage to Karl Lagerfeld with the couture show, where the Collection, named “The Dawn of Romanity” will showcase 54 looks – number dedicated to the years of tenure of Karl Lagerfeld at the Maison – embodying unparalleled tradition and new creative horizons.

Serge Brunschwig, Chairman and CEO of FENDI said, “Bringing our couture to Rome is the best way to celebrate Karl Lagerfeld, FENDI and its city, a unique opportunity to express our roots, bold creativity and the highest savoir faire, which have always been part of the House’s DNA. The Palatino Hill is a magical place, perfectly representing the values of FENDI, its tradition and its history. I am also very proud of the restoration of the Temple of Venus and Rome, thus continuing to support cultural heritage, not only of Rome and Italy, but of the whole world.”

Alfonsina Russo, Director of the Colosseum Archaeological Park said, “Emotion and Art represent an inseparable combination of culture in all its expressions. Through this event we reach a very high moment of synthesis of Italian identity focused on the charm and beauty of places and monuments that dialogue harmoniously with contemporary creativity, of which the FENDI represents one of the main excellence”, states and continues,”

Emperor Hadrianhad started the construction of the Temple of Venus and Roma in 121AD, andit was completed in 141AD by AtoninoPio. It is thought to have been the largest temple in Ancient Rome. Located on the Velian Hill, between the eastern edge of the Forum Romanum and the Colosseum, it was dedicated to the goddesses Venus Felix (“Venus the Bringer of Good Fortune”) and Roma Aeterna (“Eternal Rome”). Damaged by fire in 307, it was restored with alterations by the Emperor Maxentius.