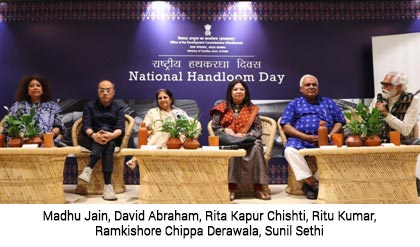 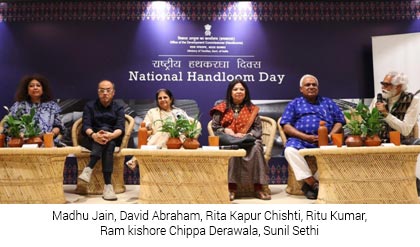 Indian weaves are the rich heritage of India, albeit now threatened with depleting practitioners of the craft. In a bid to address this situation, a noteworthy panel carried out a dialogue with a representative weaver and young designers, at a Symposium organized by the Fashion Design Council of India (FDCI) on behalf of the Ministry of Textiles, Government of India, on August 7, 2019 at the Crafts Museum, Pragati Maidan in the capital.

The esteemed panelists included the veteran designer Ritu Kumar, sari historian Rita Kapur Chishti, designers David Abraham and Madhu Jain and master-printer Ram kishore Chippa Derawala, who discussed the topic ‘Can our Handloom Heritage of the Past be a Springboard to the Future?’ The panel agreed inventive designs, increase usage of natural fibers and updating the handloom sector as well as offering financial support and infrastructure, were the need of the hour.Some of the negatives ailing the handloom sector, such as the threat by power-loom fabric masquerading as handloom, high GST making handloom fabric more expensive, and lack of awareness of consumer about fabric that is truly handloom or woven in a power loom, were discussed. 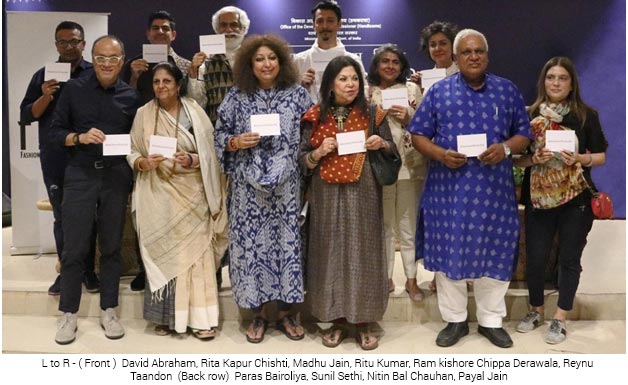 Some of the young designers offered valuable suggestions, which were duly noted by the FDCI President Sunil Sethi, who was also present on dais. A few persons, who are holding teaching positions at design schools or running NGO for weavers, shared their experience and viewpoints on the topic. Several senior designers were also present in the audience, such as Samant Chauhan, Payal Jain, Nitin Bal Chauhan, Reynu Tandon, Paras Bairoliya etc.

Sunil Sethi, President of FDCI said, “We have a 2,000-year-old legacy of handlooms and this sector employs over 43 lakh people. A revenue-driver, it needs to be nurtured and resuscitated. And on Handloom day, we collectively pledge to replenish the loom. We support the Minister of Textiles, Smt Smriti Irani and the office of DC(Handlooms) in their mission to take handlooms global and make it a lighthouse for New India.”