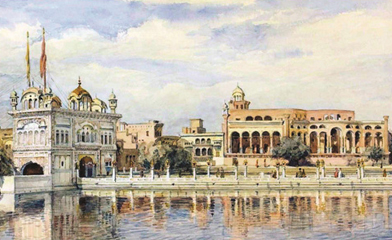 A rare exhibition of exquisite paintings depicting the Sikh community in all its glory and grandeur is scheduled from 13 – 18, April 2019 at AIFACS Gallery, New Delhi. The Hubris Foundation has curated the exhibition titled “Sikhs: an occidental romance”, selecting for display, 80 museum archival replicas of paintings by western artists from the 19th and 20th century. The Exhibition showcases beautiful artworks of over 22 artists 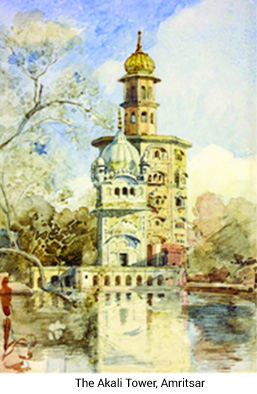 such as Alfred De Dreux , Emily Eden, Rudolf Swoboda, Edwin Lord Weeks, Prince Alexis Soltykoff, August Schoefft, William Carpenter and others . Gautam Srivastava, Founder, The Hubris Foundation explained that the exhibition was a culmination of two decades of extensive research that went into identifying and collecting the works of art from across Europe and USA. He added that ‘The Sikh: an occidental romance’ exhibition presents the most comprehensive collection of western Sikh paintings ever assembled. The Hubris Foundation attributes this exhibition to Baba Nanak for having founded the Sikh Community.

The display includes the portrait of battle hardened Ranjit Singh in reverential tranquility by Emily Eden,Edwin Lord Weeks’s iconic painting of the Golden Temple and Rudolf Swoboda ‘s portrait of a Sikh  under commission by Queen Victoria. View the works by August Schoefft  Sher Singh’s court painter who painted a credulous Akali ensnared by the thugs of central India. The Russian prince Alexis Soltykoff ‘s “Ladies of Pleasure” , a rendition of the grandeur Of  Lahore during the Sikh Empire. Charles Harding, son of Viscount Harding, the Governor General of India, painted the infamous Gulab Singh of Kashmir  –accused of betraying the Sikh Empire. The exhibition also displays incredible works of art that depict The Anglo Sikh Wars, Viscount Hardinge, the charming  cities of Amritsar and Lahore, the Jallianwala Bagh massacre and The Princess  Bamba Collection. 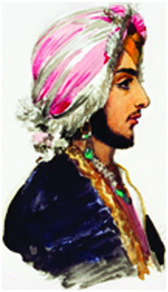 He was a watercolor artist. He travelled for six or seven years in the 1850s painting scenes of India, its people and its life. The Victoria and Albert Museum bought over 280 of his paintings.This painting titled ‘The Akali Tower, Amritsar’ shows the tower that was part of a Gurdwara built to commemorate Baba Atal Rai, son of the Sikh Guru 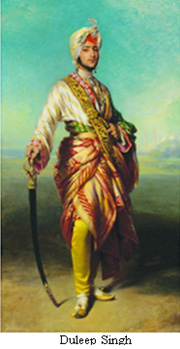 Hargobind Sahib, who died in his ninth year in 1628.The gurdwara no longer exists, and Carpenter ‘s drawing provides an invaluable record of what it looked like.The tower is located to the south of the Harmandir Sahib.

He was a German painter and lithographer, known for his portraits of royalty in the mid-19th century. Winter halter was Queen Victoria’s principal portrait painter. Both Victoria  and Winter halter  were  captivated by Duleep‘s bearing.Her journal entry of July 10,1854 reads, “Winter halter  was  in ecstasies  at the beauty  and nobility  of bearing   of  the  young  Maharaja. He  was  very  amiable  and patient, standing so still and giving a sitting of upwards of 2 hrs”. Winter halter’s portraits are rarely as romantic or exotic as this. It places Duleep in an imaginary landscape wearing his diamond aigrette and a jewel-framed miniature of Victoria by Emily Eden 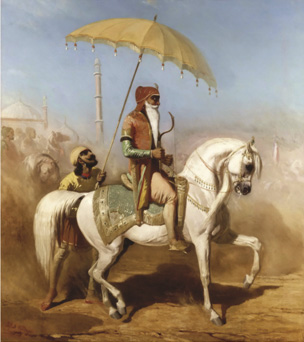 Pierre-Alfred Dedreux, who signed his works as Alfred de Dreux was a French portrait and animal painter, best known for his lifelike portraiture and lively equestrian scenes. Ranjit Singh’s trusted Italian General,  Ventura,  commissioned this portrait in 1838.Upon completion it was gifted to King Louis-Philippe, on behalf of Ranjit Singh, as a mark of friendship between the nations of Punjab and France.It is based on a miniature painting from Punjab, which was pro vided as “guidance” by Ventura to de Dreux. Alfred de Dreux was widely acclaimed as the finest equestrian artist. The painting here is titled ‘RANDJIT SING BADOOR, ROY DE LAHORE’, which translates to ‘Ranjit Singh Bahadur, streets of Lahore’

Rudolf Swoboda the younger was a 19th-century Austrian painter, born in Vienna. He studied under Leopold Carl Müller, and voyaged with him to Egypt in 1880. He was a well- 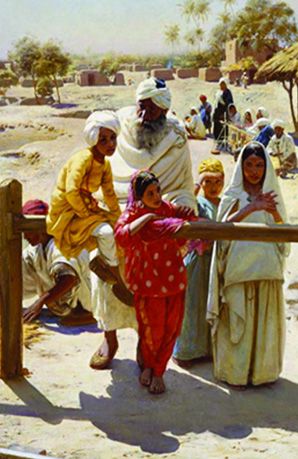 known Orientalist. In 1886, Queen Victoria commissioned Swoboda to paint several of a group of Indian artisans who had been brought to Windsor as part of the Golden Jubilee preparations. Victoria liked the resulting paintings so much that she paid Swoboda’s way to India to paint more of her Indian subjects. While in India, he stayed, part of the time, with John Lockwood Kipling, and met his son Rudyard Kipling. Upon his return from India, he also painted (in 1888 and 1889) two portraits of Abdul Karim (the Munshi), Victoria’s favourite Indian servant.Most of these Indian paintings hang at Osborne House, once Victoria’s residence on the Isle of Wight.

‘A Peek at the Train’ is Swoboda’s most significant work on India. It was exhibited at the Royal Academy in 1892 to much acclaim.A family gathers at the railway crossing to watch the train go by, soon after the railway was introduced in Punjab.This spectacle romanticizes the introduction of modern British technology to the everyday lives of the village folk of Punjab.The railway line from Multan to Lahore and Amritsar opened in 1861. 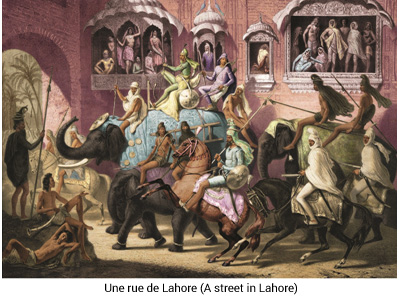 Alexis grew up in St Petersburg and at the age of eighteen joined the diplomatic services with the Russian State Board (Collegium) for Foreign Affairs in Moscow. By the age of 23 he was with the Russian Foreign Service, first in Constantinople, then in Athens, later in London, Florence, Rome, and Teheran. In 1840 Alexis retired and moved to Paris where he planned his voyages to India. He ended up making two voyages there (1841–43 and 1844–46), and achieving the sobriquet ‘The Indian’ from the Russian and French aristocracy. In 1849 he published a selection of his letters in French accompanied by his drawings, which became very well known in Europe “Lettres sur L’Inde“. 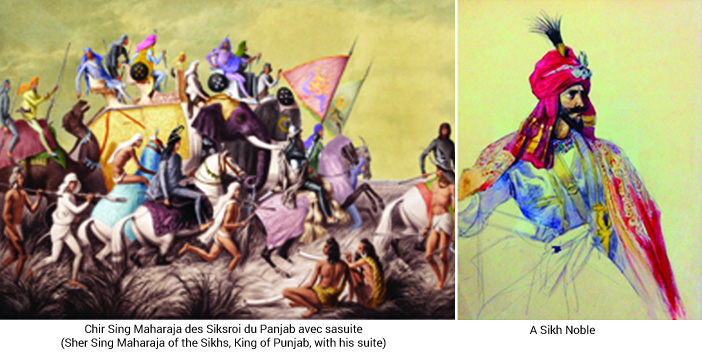 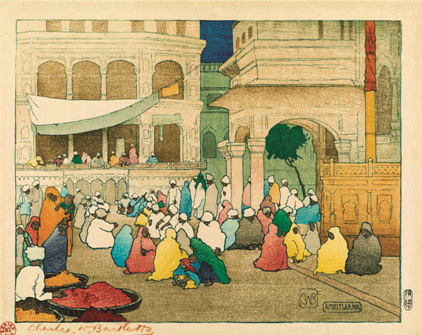 Charles W. Bartlett was an English painter and print maker who settled in Hawaii.In Japan, he was introduced to the Woodcut printing. The Bradford Museums and Galleries (West Yorkshire, UK), the Bristol City Museum and Art Gallery (Bristol, England), the Cleveland Museum of Art, the Honolulu Museum of Art, and the Library of Congress (Washington, D. C.) are among the public collections holding work by Charles W. Bartlett.The Honolulu Museum of Art holds a large collection of Charles Bartlett’s paintings and prints, and has held eight solo exhibitions of his work 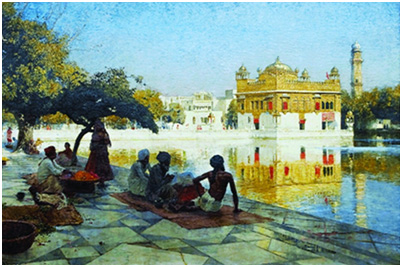 Weeks was an American artist, noted for his Orientalist works.In 1872 Weeks relocated to Paris, becoming a pupil of Léon Bonnat and Jean-Léon Gérôme. After his studies in Paris, Weeks emerged as one of America’s major painters of Orientalist subjects. Throughout his adult life he was an inveterate traveler and journeyed to South America (1869), Egypt and Persia (1870), Morocco (frequently between 1872 and 1878), and India (1882–83). During his second trip to India, 1886-7, Edwin Lord Weeks visited Amritsar where the holiest of all Sikh temples was reputed to radiate light. There he found it shimmering in the sunlight clad in marble and gold. 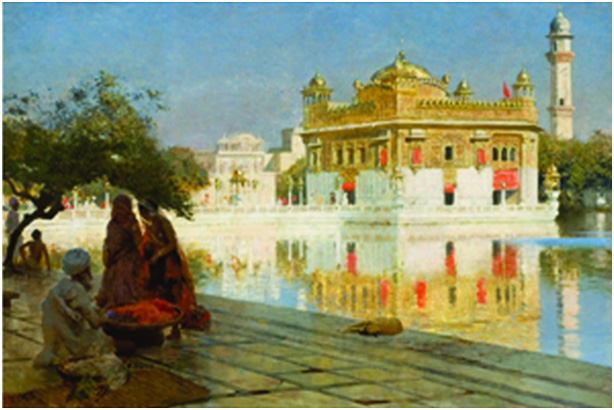 Hiroshi Yoshida was a 20th-century Japanese painter and woodblock printmaker. He is regarded as one of the greatest artists of the shin-hanga style, and is noted especially for his excellent landscape prints. Yoshida travelled widely, and was particularly known for his images of non-Japanese subjects done in traditional Japanese woodblock style, including the Taj Mahal, the Swiss Alps, the Grand Canyon, and other National Parks in the United States. From Delhi, Yoshida traveled northwestward to Amritsar, in the present-day Indian state of Punjab. The temple Darbar Sahib, known in English as the Golden temple because of its gilded roof, was rebuilt in 1764 after an earlier structure was destroyed. The city of Amritsar is sacred to the Sikhs, and the temple their most important religious center. Yoshida’s print shows the temple from across the lake in which it stands. The artist’s rendering of the reflections of the temple and nearby buildings reveals his close observation of nuances of light and color and his precise control of printing techniques. 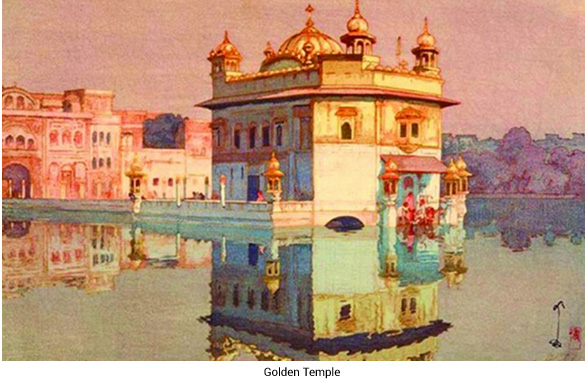 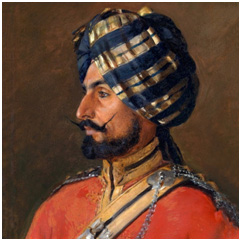 He was an English painter and illustrator of historical and especially battle scenes, mainly from contemporary history. He was a prominent painter of battle pictures. Charlton’s particular talent was the depiction of horses. His pictures were exhibited at the Royal Academy, the Paris Salon and elsewhere. In 1889 he was awarded a third class medal at the Exposition Universalle in Paris, for a painting depicting an episode in the Sudan war.As part of the celebration of her Diamond Jubilee, Queen Victoria drove through London on 22 June 1897. In this painting commissioned by her, Victoria is seen in an open State landau arriving at St Paul ‘s Cathedral,Victoria’s carriage is led by an escort of cavalry constituted predomi­ nantly by Sikhs from the Indian Army. 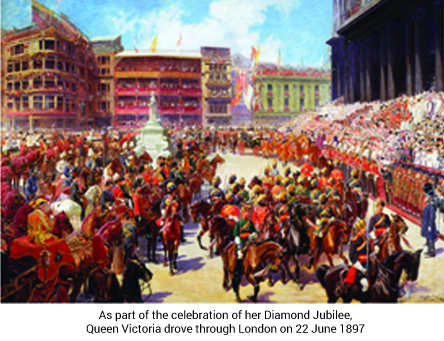 Visit the AIFACS gallery in New Delhi between April 13th-18th 2019.