“Earth’s crammed with heaven…
But only he who sees, takes off his shoes.”
–Lines from Elizabeth Barrett Browning’s prose/poetry ‘Aurora Leigh’ (1856) 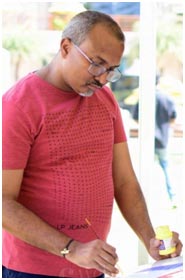 The world of Thota Laxminarayana is just such a place, a languid harmonious paradise, which he brilliantly captures in his artworks. The multitude colours of the rainbow, the happy birds on tree tops or just posing in the backdrop, or sitting atop a content buffalo wallowing in the waters, the simple folks going about their lives, people at ease, the canvas is rich, exuding a sense of happiness and a feeling of ‘all is well with the world’. There is an almost childlike perspective of the world, where everything is his own take on the real, further embellished with his imagination, all melded in primary colours. The artist’s eye sees beyond the mundane ordinariness of the scape, a paradise garden. His is the kind of work that uplifts the heart and brings a smile every time I see it.

My encounter with Thota Laxminarayana was only through his art, never having met him. We connected long distance, I from Delhi and he in Nirmal, a little town in Telangana, surrounded by several ponds, and famous for its folk art.

What inspired you to become an artist? Was it a family tradition? Please share.
My family was into agriculture and my father had a job. However, some family members were drawing teachers, and I became interested in this. My cousin had books on artists like PT Reddy. I read them all and aspired to become an artist. I was good at drawing. My art materiel was limited to my note book and pencils. My father wanted me to get a government job. I took his advice. I appeared for entrance exams. I kept on painting, but not professionally. Secretly sold some works. I got married, became a father, but it is only since 2007  that I started pursuing art actively, participating in art shows, with art galleries.

What influences the theme of your paintings? Where have you received training? 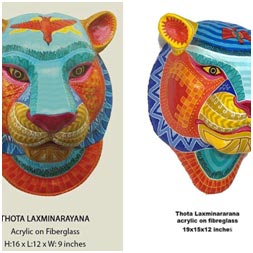 I am a self-taught artist. Nirmal’s traditional folk art heritage is about stories of Indian mythology in painted scrolls, of people and incidents.My style reflects a mix of tribal and traditional  art. I portray the ordinary life around me as I see it, in all its simplicity and beauty. When I lived in the village, the people were of the rural area. When I moved to the city, the people are dressed differently. My series ‘Meri Marzi’ is when I moved to the city. The girl, a dish-washer, is portrayed in city fashion. I have been stuck with buffaloes and cows for a while, but people like it. Also, they are all around in Nirmal. The transistor radio was very popular at that time. People kept it very close to them when they went about their business. Everyone was listening to it for news or music. It also appears regularly in my art. I have painted children playing sports like ‘gilli-danda’ etc. I like to portray the ordinary life around me.

My main teacher and ‘guru’ was the famous sculptor Ravinder Sharma of Kala Ashram. From him I learnt how an artist works, the discipline. The people in the village were commercial artists.

Tell us more about your guru Ravinder Sharma.
Guruji, as I called him, was from Adilabad. He used to come to Nirmal frequently. He worked with metal casting, and my home was close to the workshop. I used to be fascinated by this. He has been a huge influence on me. He used to travel to different villages to understand local art. He exposed me to the tribal lives and works. He founded the Kala Asharam and was awarded the Kala Ratna by the state government in 2014. We used to have long discussions on arts, culture, festivals. 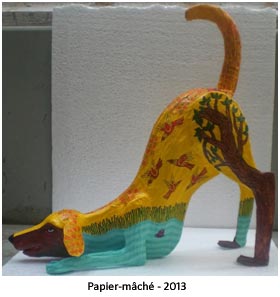 Have you tried your hand at sculptors also?
I have worked with papier-mâché and clay as well. Mostly papier-mâché. I made terracotta platters that are used as a ‘tava’ for roti making.

What do you do to relax?
I draw. Having spent my early years drawing profusely, I go back to it when I want to relax. Every month I make about 10 or more ink-on-paper drawings, which are also in demand. People are liking it.