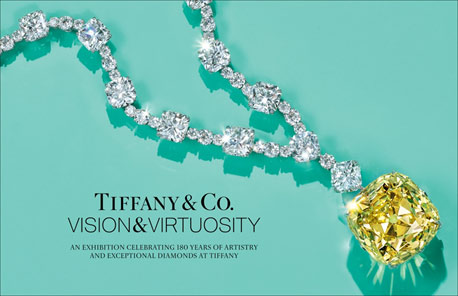 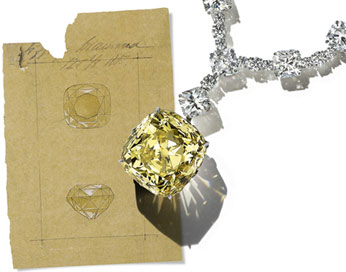 The Legendary Tiffany Diamond Stars once again in the movies. The association of Tiffany’s with the Hollywood movies has added to the glamourous appeal of the brand hugely. The incomparable 128-carat Tiffany Diamond, made famous by Audrey Hepburn and last worn by Lady Gaga, will appear in the new 20th Century Studios daring mystery-thriller, “Death on the Nile”, based on Agatha Christie’s 1937 novel. Leveraging the association, Tiffany & Co.’s integration, which will be featured in stores and online, showcases sparkling Tiffany diamonds and jewelry in Kenneth Branagh’s new film, in theaters October 2020. A recreation of The Tiffany Diamond is prominently featured at the center of the storyline, alongside other Tiffany designs worn throughout the film. 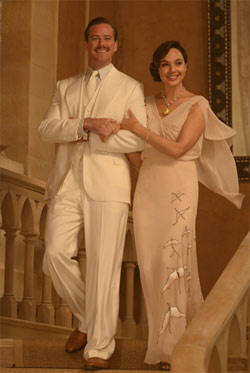 This October, Tiffany & Co. will promote the film in stores and across its digital platforms, highlighting Tiffany’s radiant yellow diamonds and the exceptional collections seen on screen. Select Tiffany stores will feature a “Death on the Nile” curation of diamond-intensive Tiffany jewelry reflecting looks from the film, including exquisite and one-of-a-kind high jewelry pieces.

In addition, store windows that capture the spirit of Christie’s thrilling mystery and feature jewelry from the film will be featured at the Tiffany Flagship Next Door in New York, the Beverly Hills boutique in Los Angeles, and the Old Bond Street location in London.

In “Death on the Nile”, Belgian sleuth Hercule Poirot’s Egyptian vacation aboard a glamorous river steamer turns into a terrifying search for a murderer when a picture-perfect couple’s idyllic honeymoon is tragically cut short. Set against an epic landscape of sweeping desert vistas and the majestic Giza pyramids, this tale of unbridled passion and incapacitating jealousy features a cosmopolitan group of impeccably dressed travelers, the stunning Tiffany Diamond, and enough wicked twists and turns to leave audiences guessing until the final, shocking denouement.

The Tiffany Diamond is one of the world’s largest and finest yellow diamonds. Discovered in the Kimberley diamond mines in South Africa in 1877, the 287.42-carat rough stone was acquired the following year by founder Charles Lewis Tiffany for $18,000 and solidified Mr. Tiffany’s reputation as the “King of Diamonds.” 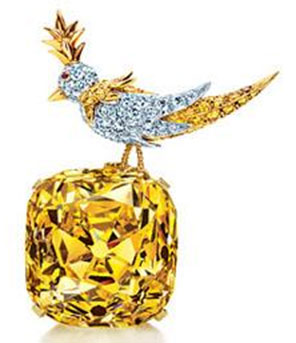 The rough stone was brought to Paris, where Tiffany’s chief gemologist, Dr. George Frederick Kunz, supervised the cutting of the diamond into a cushion-shape brilliant weighing 128.54 carats with an unprecedented 82 facets—24 more facets than the traditional 58-facet brilliant cut. The stone is just over an inch wide and seven-eighths of an inch from top to bottom. Cut to enhance its radiant color rather than size, the diamond sparkles as if lit by an inner flame.

The Tiffany Diamond was the highlight of Tiffany’s award-winning exhibits at the 1893 World’s Columbian Exposition in Chicago and the 1939–40 World’s Fair in New York City, among many others. Later appearances included the 2006 “Bejewelled by Tiffany” exhibition at Somerset House in London, and an exhibition celebrating the National Gem Collection at the Smithsonian’s National Museum of Natural History.

The diamond has been set on four occasions, two of which involved original designs by Jean Schlumberger, Tiffany’s renowned jewelry designer. In 1961, the Tiffany Diamond was set in Schlumberger’s Ribbon Rosette necklace and worn by Audrey Hepburn® in publicity photographs for the film ‘Breakfast at Tiffany’s’. It was also mounted in Schlumberger’s Bird on a Rock setting for the designer’s 1995 retrospective at the Musée des Arts coratifs in Paris. 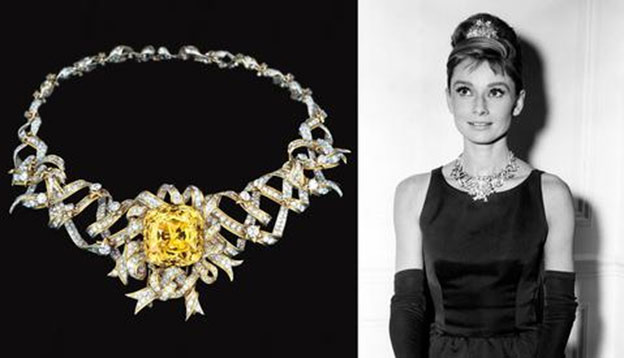 TAKE ME TO FIFTH AVENUE

In one of its rare appearances in Tiffany’s Fifth Avenue windows, the diamond was placed in the hands of a gold wire angel for a holiday display by famed Tiffany window designer Gene Moore. The Tiffany Diamond has traveled the world as a centerpiece of numerous exhibitions, but always returns to its home at the Tiffany flagship store on Fifth Avenue in New York City, where it is on public display.

“DEATH ON THE NILE”
Trailer of ‘Death on the Nile’

In 1837, Charles Lewis Tiffany founded his company in New York City where his store was soon acclaimed as the palace of jewels for its exceptional gemstones. Since then, TIFFANY & CO. has become synonymous with elegance, innovative design, fine craftsmanship and creative excellence. During the 20th century its fame thrived worldwide with store network expansion and continuous cultural relevance, as exemplified by Truman Capote’s ‘Breakfast at Tiffany’s’ and the film starring Audrey Hepburn. Today, with a workforce of more than 14,000 employees, TIFFANY & CO. and its subsidiaries design, manufacture and market jewelry, watches and luxury accessories – including nearly 5,000 skilled artisans who cut diamonds and craft jewelry in the Company’s workshops, realizing its commitment to superlative quality. TIFFANY & CO. has a long-standing commitment to conducting its business responsibly, sustaining the natural environment, prioritizing diversity and inclusion, and positively impacting the communities in which we operate.

The Company operates more than 300 TIFFANY & CO. retail stores worldwide as part of its omni-channel approach. To learn more about TIFFANY & CO. as well as its commitment to sustainability, please visit tiffany.com.

The ‘Garden of Delights’
(Hortus Deliciarum)
High Jewelry by Gucci