A self-proclaimed non-hotel, Tijara Fort Palce by Neemrana Hotels, offers a lot more than verdant views and good hospitality. The magic, as we discovered, was in listening to the stories of its history, and letting the imagination run away a little, which is quite easy at this resort, as you will find. The scope for explorations were ample. Mr Anand Kumar, a courteous member of the staff facilitated a guided tour, pointing out yet unexplored underground tunnels, old stables being restuctured, kitchen gardens and such, sharing lores and myths of this land. I got lucky with a chance meeting with the co-founder of Neemrana, Mr Aman Nath himself and Mr Jayant Sanyal, who had at the start, identified the heritage value of the ruins; and they both generously shared their tales. There are many reasons to visit here.

The bleak weeks and months of compulsary confinement, enforced by a microbe, were interrupted briefly mid August, with an opportunity to visit Tijara Fort-Palace by Neemrana Hotels, in Alwar Rajasthan. Overwhelmed with concerns of safety, as well as the strong desire to get away to open spaces and some pampering, clearly the latter emotion prevailed. Any trepidation about driving in mid monsoon season was lulled as the Hotel provides the facility to pick-up and drop in their own sanitised vehicles with masked driver, from near by areas like Delhi, Jaipur. Less than a 100 kms away, the short two and a half hour journey along NH48 from Delhi, turns off into the Alwar bypass Road, finally meandering up a hill to the East wall of the Tijara Fort-Palace, to the parking at the enterance. The tallest of the three entrance gates, ‘Haathi Pol’ or elephant gate, high enough for the pachyderm with its royal howdah, is manned now by masked guards and sanitiser pumps.  Atop each of the gates, is the ‘Noubatkhana’ with sloping roofs, where perhaps the drummers or buglers announced the visitors. The wide fort walls, narrow steps without railings running up to the ramparts, stone pathways leading off in different directions, the architecture is reminiscent of other Rajasthani forts and palaces and havelis. Recessed windows set in thick walls looking out at the fields and villages below the hill, cusped arches held up by carved stone pillars, verandahs littered with granite top tables, wooden chairs and recliners, corridores fronting rooms with antique doors, jharokhas, carved stone jaalis, narrow stone stairwells, as if everything had survived the ravages of time, and remained as was. 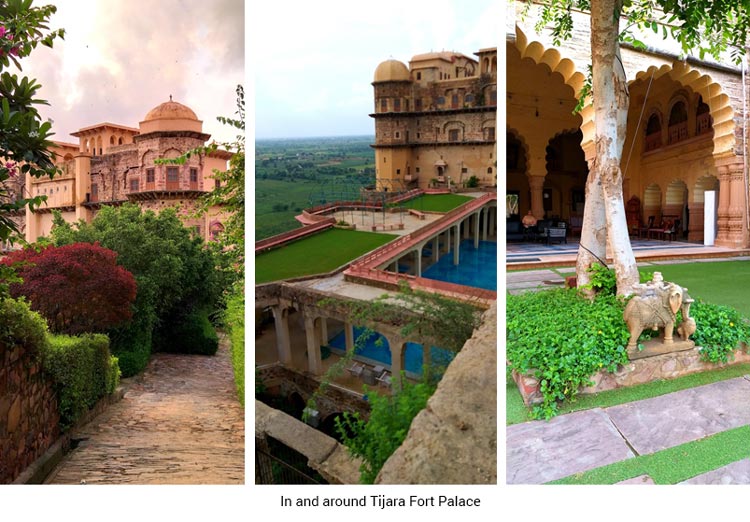 The Tijara Fort-Palace resort is set atop an uneven hill, with separate palaces for the king and the queen mother. There are four key structures connected with pathways that cut across terraced gardens, sometimes breaking into steps or dividing into inclines and ramps, widening and narrowing, changing character to match the stature of the venue they lead up to. The many storied palace of winds, Hawa Mahal where the evening tea is served, gives a grandstand sweeping view of the fields and farms and villages. It is magical to sit here sipping the Earl Grey with hot pakodas and watch the endless swoop and dance of the swarm of swallows. Across from here, at the western edge of the hill, is the Rani Mahal, the palace for the Queen Mother. Designed with privacy in mind, the enterance gateway is fronted by a wall inside to block the direct view. Surrounded by deep verandahs and elaborate rooms, is the sunken central courtyard space. Could that have been a bathing pool for the ladies? It has steps to climb down. Now it is a wild garden

with a variety of trees and plants. There are three floors with rooms of different sizes, and unique features, with painted frescoes, alcoves, drapes and bamboo chick blinds, the elegant feminine touches, one can virtually hear the tinkle and laughter of the colourfully attired royal maidens. At the higher southern edge of the hill is located the palace of the king, Mardana Mahal. More open, wider gardens, protected by many enterance gates, all leading up to the Darbar area. The glass palace, or the Kaanch Mahal surrounded by the hanging gardens, is the dining area. Under the supervision of Chef Birda Ram, the excitement around food was high for all the meals.Tijara Fort Palace is like a living art gallery, as I found. Each of the suites and rooms is named after an artist, who has designed and embellished the room with their art. The Alwar Lounge has a wall painting by Anjolie Ela Menon. Each of the Mardana Mahal suites are named after the male artists, who designed it, and the Rani Mahal showcases the creativity of the women artists. Naturally, each room is unique. There is a sperate suit of rooms for those wishing to bring their pet along. Located outside of the two Mahal complexes, the noisy reveleries or barking do not disturb.

The history of the Tijara Fort Palace tells the story of a fairytale romance, of love and passion, of sacrifice, of valour, of palace intrigue and deceit, and unrequited dreams. Barely 200 years ago, in 1790, the 15 year old prince Rao Raja Bakhtawar Singh ascended the throne of Alwar in 1790. He fell in love with a beautiful village girl and married her. She was ‘Moosi Rani’, who gave birth to a son, Balwant Singh and a daughter Chand Bai. The King Bakhtawar Singh died at the age of 39. The grieving Rani Moosi commited Sati, burning herself in her husbands funeral pyre, posthumously earning her the title of Maharani. Her son  Balwant Singh now got to inherit the title of King and marry into royalty. He decided to build a fort palace in the memory of his mother, Moosi Maharani. In 1835, he started work on this fort at Tijara, strategically located atop a steep hill. He had a grand vision and got famous architects and masons from far away lands. But it was not to be.

Half way through the project, in 1845, Maharaja Balwant Singh died mysteriously. His dream project of a hill top fort at Tijara was abandoned. 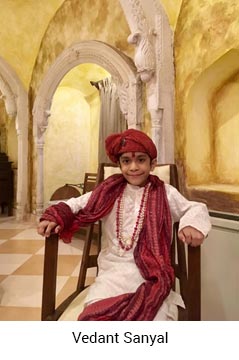 It took nearly  170 years, for the dream of Maharaja Balwant Singh to be fulfilled, when Neemrana opened its doors to a fully renovated Tijare Fort Palace in 2016. One has to see the picutures of the fort before the renovation work, to realise the mammoth scale of work that Neemrana has undertaken. It is a marvel of restoration, and imagination of its founder Aman Nath, who

has painstakingly rewoven  an entire fabric of living history, of imagined opulance and what it could have been like. It is hard to believe that the stone pathways did not exist, the tall drapes are recent, the beautiful Dhurri pattern tiles in the Durbar Hall, the Kanch Mahal etc, are actually designed and developed by Aman Nath himself. The huge carved double pillars are original, but the granite top tables are new, as is the woodwork, the intricate stone jaalis et al. He has been able to recreate a historical legend, using a mere thread of a memory perhaps kept alive in the lyrics of balladeers. Everything here is designed to let oneself travel in time to a dreamworld. And so it was one evening. I time travelled to see the handsome young prince reading out his dictat to an august gathering. The two guards with flowing colourful turbans, the bejewlled queen mother in silk, the courtiers in their finary – the illusion was complete, and magical. 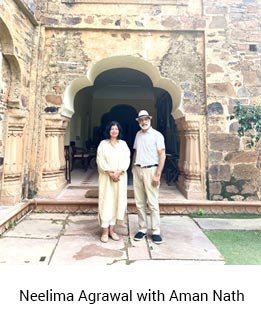 At the time of my visit, I got lucky in meeting Mr Jayant Sanyal, who was here with his extended family for a relaxed few days.  The young prince was his grandson Vedant Sanyal, son of Nidhi and Saurabh Sanyal, who has inherited the love of history from his family. Mr Jayant Sanyal had many interesting anecdotes to share about the role he played in bringing Tijara to the attention of Aman Nath.  At that time, this place was  a heap of rubble, overrun with vegetation and wild animals. So much so that when the Government opened the Tender, not one hotelier applied, said Mr Aman Nath. It has taken many years of painstaking and meticulous reconstruction, before the hotel opened in 2016 for the public. The keen artistic inputs by Aman Nath make Tijara Fort Palace special, even as Neemrana Group of Hotels is known for its many heritage hotels. 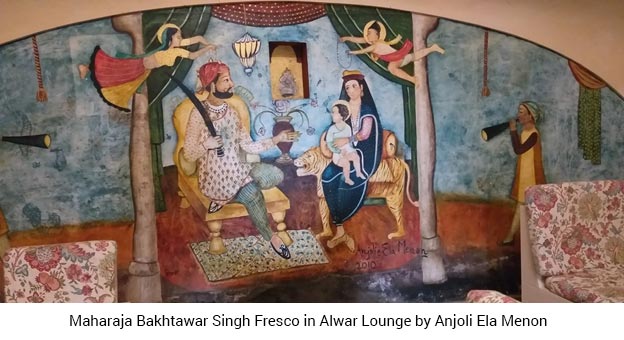 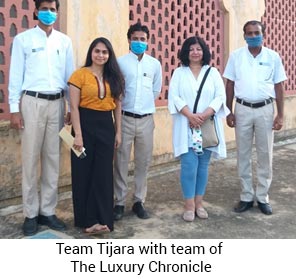 Beyond the aesthetics and the ambience of Tijara Fort Palace, the most important element that adds value is the hospitality of the staff. Always cheerful and helpful, offering to go the extra mile even when not expected. Anand Kumar, when free from his duty at the restaurant, volunteered a private tour in his free time. Some of this attitude comes from good training or as part of the job, but the genuineness of the emotion is only possilbe from a more emotional place. During the lockdown due to Covid 19, the hotel industry was majorly hit, and even star hotels sacked their staff, no one at Tijara Fort Palace lost his job. Neemrana Group continued to support their workers throughout. Anand Kumar spoke about the immense relief, and how each of the staff member rallied around, to pitch in to develop the kitchen gardens in preparation for when the guests would return. Good sustainable practices and humanitarian approach is what creates the deeper impact. The safety during the pandemic is the top priority. The large distances helped. The staff had their masks on at all times and maintained all the protocols, even as some of the guests tended to forget. All food served at the table. Sanitisers liberally available at all touch points. Staff is subjected to regular tests and daily temperature checks etc.

The pandemic has impacted our lives in many ways, stymying holiday trips and social gatherings and enforcing the work-from-home. In such a scenario, resorts like Tijara Fort-Palace provide the safe escape from confinement, and an ideal venue to gather with friends and family for celebrations or just the experience.