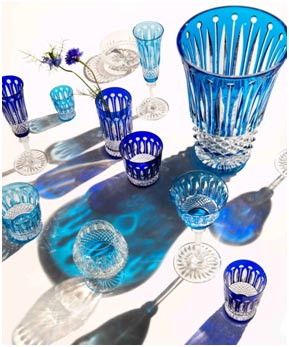 Europe’s oldest and most revered crystal glass manufacturer, Saint Louis has celebrated the ageless appeal of the hand-cut timeless collection of crystalware including lights and vases Tommy for over 90 years. Now Emery Studio, the specialist in bespoke lighting, contemporary home décor and tableware located in New Delhi, have brought Tommy – by Saint Louis to India.

It was first unveiled in 1928 to celebrate the tenth anniversary of the Great War.The legend of Tommy has lived and flourished since then. From its star-shaped base to the sparkling glints of the diamond, bevel, pearl and rim cuts, Tommy stands out as an iconic collection. In 1938, Tommy was officially presented at a prestigious luncheon hosted by the then-President of the French Republic, Albert Lebrun, at the Château de Versailles in the Hall of Mirrors, in honor of the British king George VI and his wife. Each of the 200 guests admired a series of 11 Tommy glasses. Eventually, 2,200 mouth-blow and hand-cut glasses were produced for the occasion.

Tommy employs a unique technique of the double-layered crystal (clear crystal lined with colored crystal) that offers depth to the eight emblematic colours. The crystal is then decorated portraying all of the signature cuts of the brand – star-shaped base, diamond, bevel, pearl and rim cuts. Named after the English soldiers celebrated in Rudyard Kipling’s poems, Tommy is thus emblematic of the brand’s know-how.

In 2017, Tommy came up with a brand-new product – lighting. The two table-lamps (small and large) and a large oval vase launched display bold cuts upon the clear crystal. Tommyssimo joined the festivities with vibrant colours – dark-green, dark-blue, flanel-grey and red in a large vase format. These exceptional creations are numbered and limited to 188 pieces per colour.