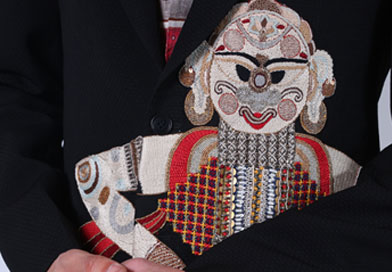 By Meher Castelino
Mumbai,
May 2021

What makes Indian fashion different from its global counterpart? It is the surface texturing and the amazing embellishments, which Indian designers add to their creations. From the various craft techniques that are a specialty of every corner of our country, to the prints and embroidery, Indian designers have a great advantage when it comes to presenting memorable looks with their collections.

At the latest phygital edition of FDCI x Lakmé Fashion Week, which was held from 16 – 21 March, 2021,  there was a grand display for texturing and craft that designers dreamt up for their ensembles.  Here is my list of the top ten designers who brought unforgettable looks that could turn into timeless treasures for the buyers. 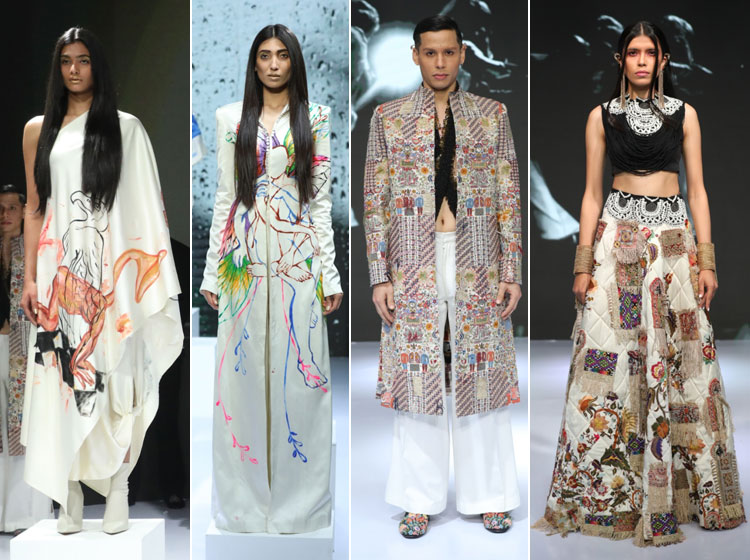 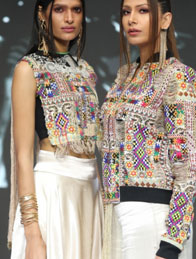 Anamika Khanna’s collection “Timeless the World” that opened the phygital FDCI x Lakmé Fashion Week event was a creative and clever merging of art and craft that gave the creations a truly unique and timeless quality. From contemporary brush strokes of paints by artists Deepak Kumar Saw, Smriti Lekha Gogoi to Amlan Dutta, the surface story moved to rustic tribal touches, where Anamika artistically slashed, cut and tore fabrics and combined them with embroidered patches. There was shimmer and metallic thread work, while the hand painting, tassels, fringes and craft blocking were an arresting visual effect. Keeping the silhouettes a mix of western, Indian as well as fusion inspired looks, the loose tunics, asymmetric skirts, floor kissing coats, kimono style creations, cropped pants, button less Sherwanis, kaftans and fluid pants were given an inventive fabric texturing for the men’s and women’s festive wear. 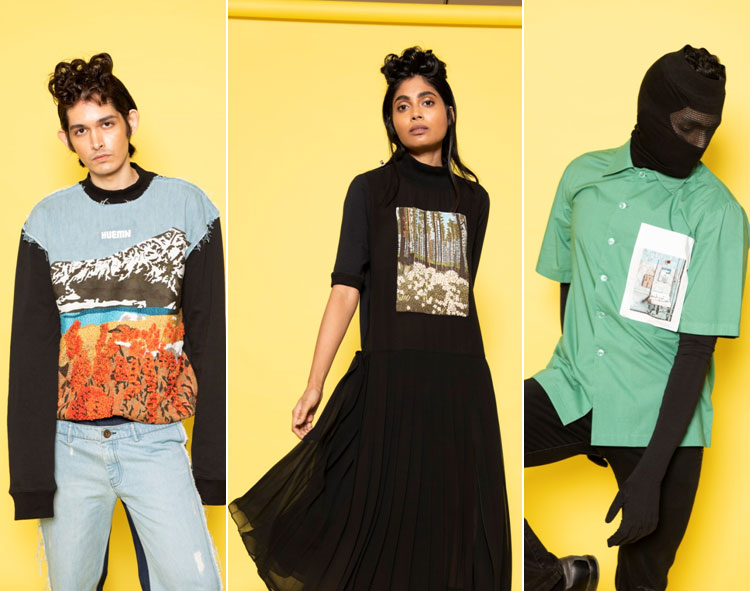 The Huemn label by Pranav Mishra and Shyma Shetty has always been true to causal unisex clothes, which have a relaxed laid back focus on the silhouettes. Their texturing techniques have always given their garments a visual appeal that can immediately be identified with their characteristic style sensibilities. Their collection had the Kashmiri landscape as the theme for the “Huemn 21” heavily textured line. Using 100 per cent cotton and silk fabrics along with denim, the craft comprised a profusion of French knots, Aari and ring knots. The Indian craft was also given an innovative twist with intense 3D layering. The charcoal and water coloured work of Kashmiri artist Mujtaba Rizvi was also seen on the T-shirts. The mix of fabrics like the knit and denim pants, frayed edged cleverly; as well as the contrast pattern and colour blocking of textiles, added to the creative emphasis of the garments. 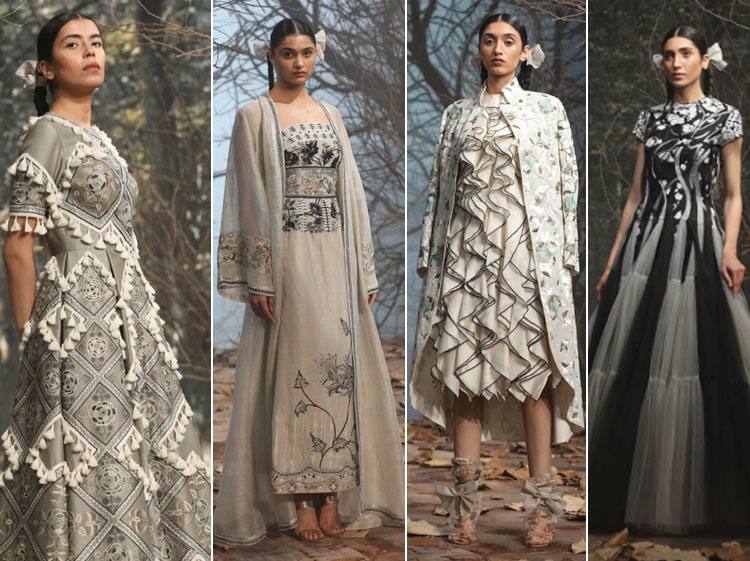 When it comes to projecting a fragile delicacy for embroidery, not many can beat the treatment that Samant Chauhan gives to his feminine women’s apparel. The collection called “New Born” was just that. Soft, sheer, muted tones in feminine fabrics had shimmering details and classic embellishments in black, white, beige and brown that were seen artistically on long, flowing, sleeves, hemlines, skirts and bodices of the elegant gowns. The prime motifs were the exquisite florals that were brought on the surface in myriad shapes and sizes and appeared gracefully all over the ensembles. 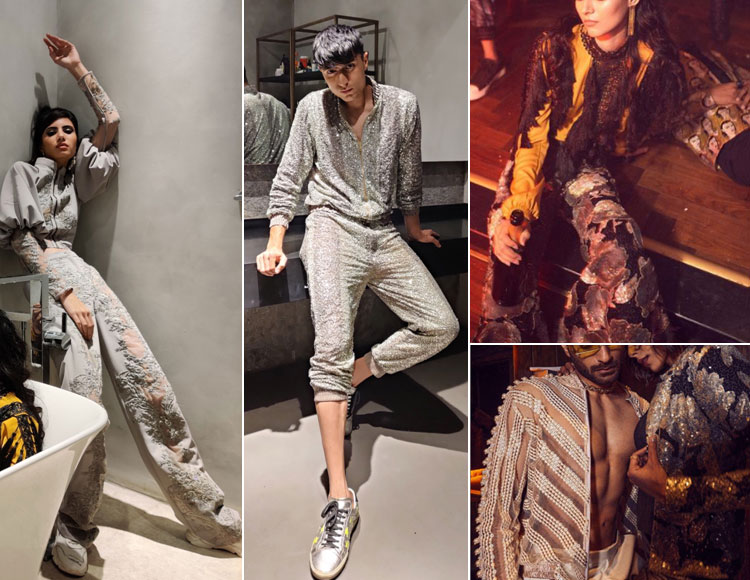 The collection Studio 54 brought to the forefront various characters according to Siddartha Tytler’s fashionable story. For men’s and women’s wear, the designer did not restrict his creative touches; in fact, the lavish embroidery appeared freely for his offerings on garments for both sexes. Loads of crystals, sequins and computer embroidery turned the look of the base fabrics into intense eye-catching presentations. The 80’s look was evident but with large dollops of brash, bold and shock inducing styling, as well as surface drama that turned the collection into a show stopping experience. 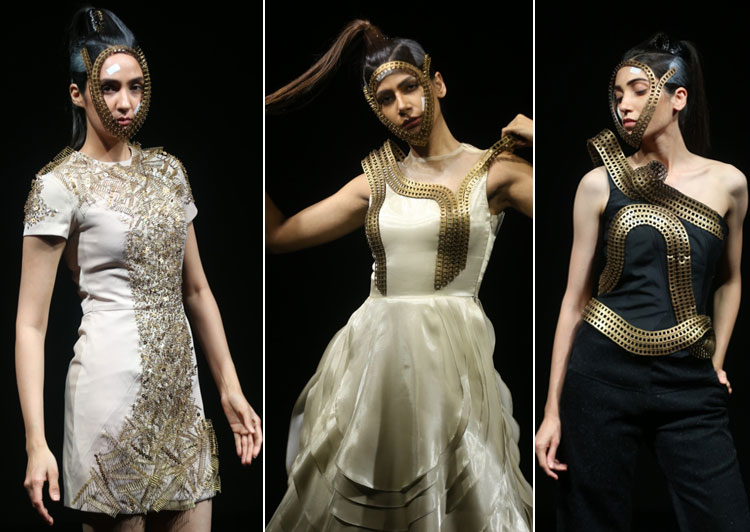 A Nitin Bal Chauhan collection is always an extraordinary presentation. One can expect the most outlandish texturing and ornamentation for men and women’s apparel. His display called “Faux Amis/ False Friends” brought metallics to centre stage and highlighted an otherwise very safe and basic line of silhouettes for both sexes. The metallic perforated strips appeared in dramatic forms on the garments as well as on the model’s heads, arms and bodices. The colours were soft and metallic to match the embellishments, while the architectural shapes of the strips did all the fashionable talking. The 3D embroidery further added to the drama of the collection, which without the metallic accoutrements would have been quite mundane. 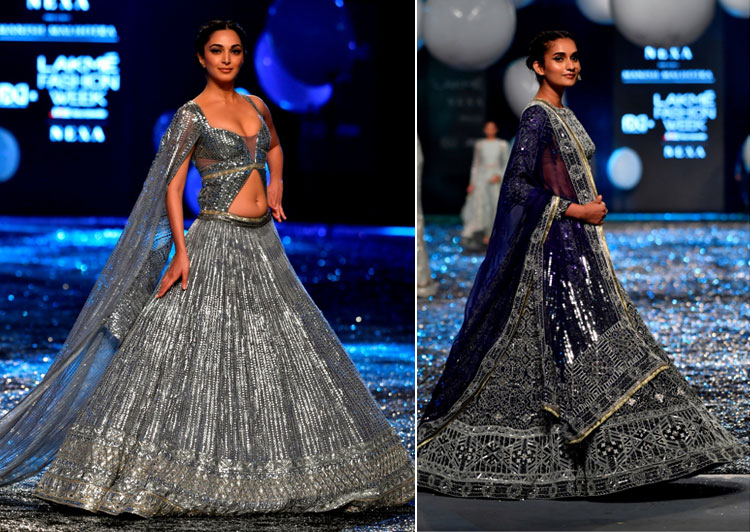 Bridal wear and drama are synonymous with the designs of Manish Malhotra and his collection for the bridal couple. This time too it had all the pomp and grandeur that makes fashion a visual feast for the eyes. It was the magnificent embroidery in gold, silver and multi colours along with intricate craft that brought the embellishments to the forefront. The majestic lehengas with their ornate work were matched in beauty with the intensely crafted tiny cholis that defied gravity as they were button less but moulded to the body. The fully encrusted will-power gowns in gold and silver brought a nostalgic look of an era long gone by. Men’s wear also dazzled with gleaming lapels and placement embroidery. 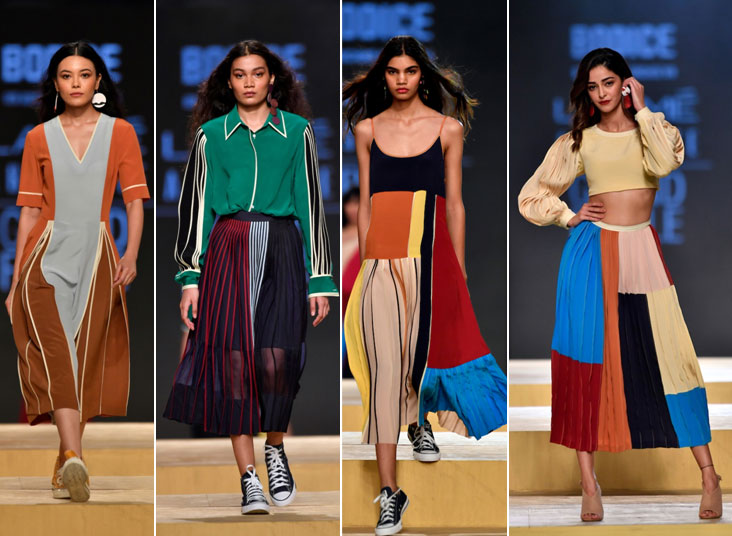 There is a basic almost minimalist touch around the creations of Ruchika Malhotra for her ‘Bodice’ label and her scoring point is the intricate detailing and surface texturing she achieves with her intense pleating and piping techniques. The pleating and piping appeared imaginatively on various segments of a garment or at times created a visual delight with a complete covering for the apparel. There is clever geometry in the detailing placements on the ensembles as well as the saris, which were given a contemporary youthful touch. The collection called “Ready Set Play” brought sporty chic to the line but without it being overtly aggressive and yet maintaining a delicate, feminine quality. 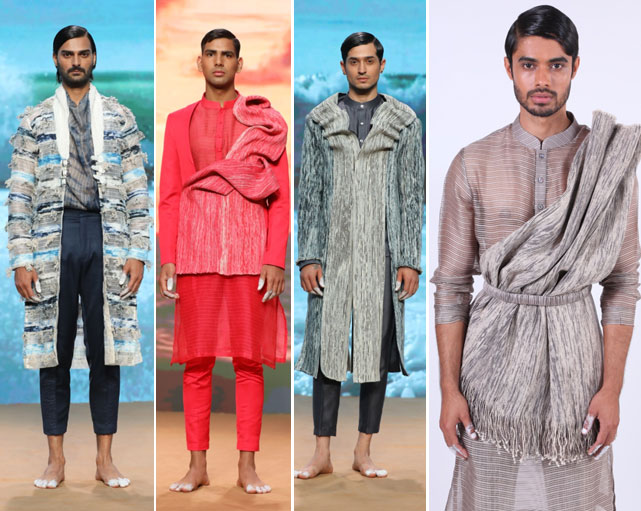 For Rahul Dasgupta the Gen Net designer who concentrated on men’s contemporary ethnic wear it was the Shibori craft that was the star of the collection. Inspired by the gentle seas waves, the Shibori was merged cleverly with surface detailing that brought in ribbing as well as a cascading ripple of fabrics for the kurtas, jackets and Sherwani. Shibori was seen on cotton dori and the selvedge of fabrics like organza and cotton, while the tie and dye technique also appeared as impressive lining for the apparel. 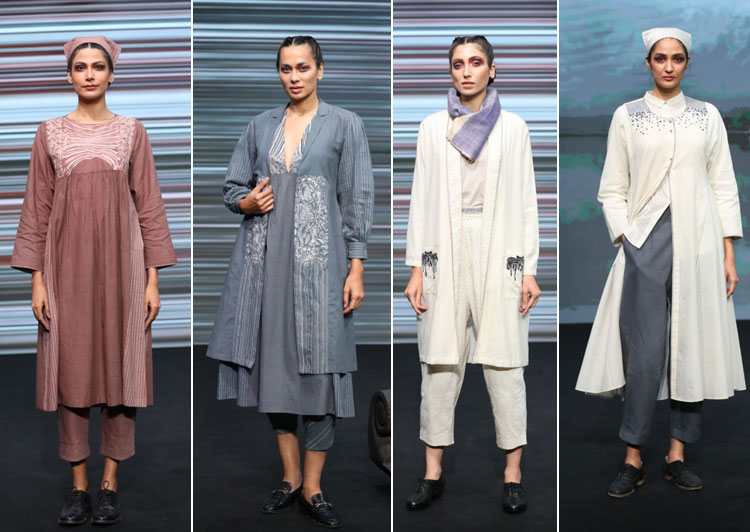 Wajahat Rather’s ‘Raffughar’ label presented the “Maazi’ collection of women’s wear that paid homage to the Pheran with the Kashmiri craft featuring the paisley as the focal interest. The pixelated motifs of the paisleys were merged with block printing on hand-woven Merino wool as well as Khadi. The embroidery was discreetly utilised and never overwhelmed the ensemble but highlighted the sleeves, necklines, yokes and hemlines thus turning the Pheran into a trendsetting option for the millennials. 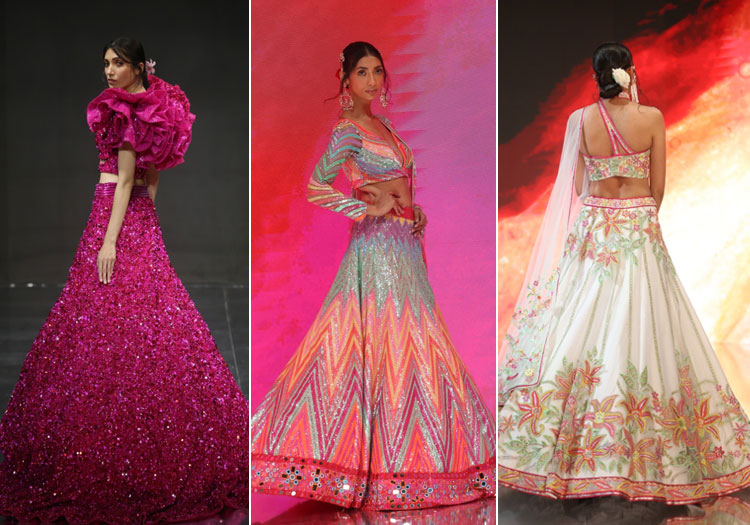 Suneet Varma’s “50 Shades of Happiness” was exactly that as the designer unveiled a line of bright hues and extravagant silhouettes that will delight women who long to take the Saat Pheras this year. The detailing brought forth a merger of dramatic ruffles that were drizzled with shimmer for the sleeves and necklines and appeared to be the leitmotif of the collection. The intricate floral embroidery engulfed the sheer tulles of the lehenga, choli and dupatta trio. From multi-coloured embroidery to tonal treatment, the various craft techniques were the highlight of the ensembles. Crystals, sequins, zari, thread work as well as 3D appliqués vied for attention and ensured that the embellishments that fully encrusted the grand bridal wear glittered in their blinding glory.

What’s new out there in Indian Men’s wear?
prev next