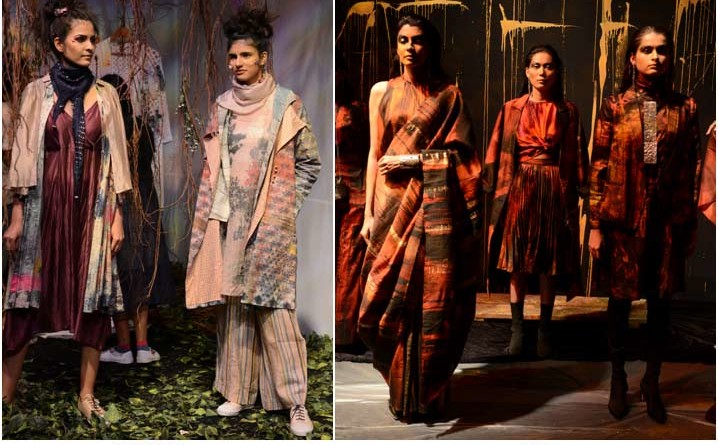 At every fashion week, there are certain trends that influence the looks for the coming season. At Lakmé Fashion Week Summer/Resort 2019, designers were adventurous enough as they brought in some great styles that will appeal to the fashion forward men and women who are quick to adopt new trends on the Indian fashion scene. 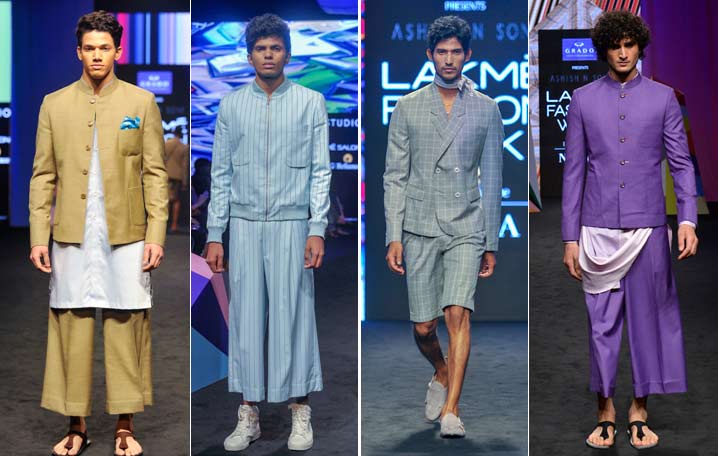 The way trousers have gone through various stages of silhouettes and styles it’s a wonder that men still wear them. In the 40’s and 50’s they were wide. Later they moved into more sober parallels and then at the start of the 21st century trousers for men were lean and figure hugging. Come 2019, Ashish N Soni for the Grado show has trousers that are back to being comfy but they are cropped, either at the ankle or even calf, and if the man has great legs then they could be even knee length. How lengths can make a difference in projecting a man’s personality! By the way, in Australia knee length Bermudas are the look during summer for executives who team them with a shirts, ties and jackets. 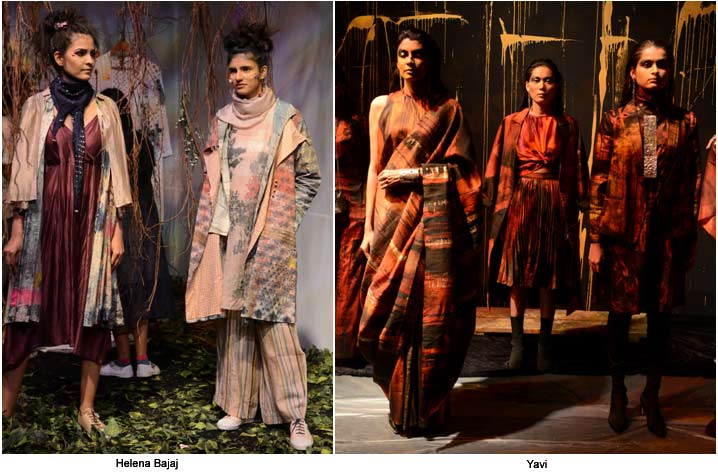 These two forms have been inter-connected for a long time. Way back in the early 1990’s artists and designers had teamed up to bring forth collaborated collections that created a fashion stir. Now for 2019 designers like Bobo Calcutta, Yavi, Helena Bajaj Larsen and Ajay Kumar Singh decided to paint on their garments and the result is collections that act as canvases as well as add to one’s wardrobe in a unique manner. Isn’t it wonderful that security for your art is in your hands – you wear it instead of letting it gather dust on the wall?

BUNDGALA FOR HIM AND HER 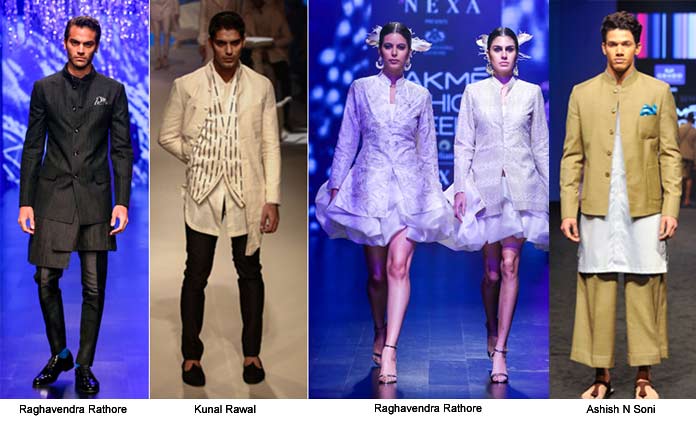 No longer is fashion grouped in masculine and feminine genres. If women have been wearing trousers for a long time now, the bundgala jacket that was once considered formal wear and was the Indian answer to the tuxedo, has moved into feminine territory. Raghavendra Rathore has been pushing this regal ethnic jacket, a favourite of Maharajas of the past, onto the women’s wear segment for several years. For 2019 he is very emphatic that it can be worn with skirts, trousers and minis. Kunal Rawal and Ashish N Soni also agree, so their bundgala jackets are seen on men. How wonderful to now buy a garment that is suitable for HIM and HER. Besides, it not only saves money but also takes up less space in the cupboards. 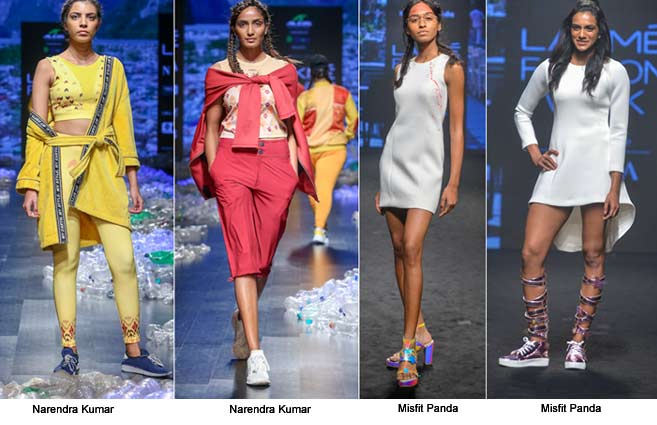 Athleisure fashion is big for 2019 and designers are pushing it for clothes as well as footwear. Narendra Kumar’s collection with Alcis Sportswear brought forth a line of garments for both sexes that is likely to be favoured for stylish and even formal wear instead of casual garments. On the other hand Misfit Panda the footwear brand offers great formal, casual and sporty shoes that will appeal to fashionistas. What a relief that dressing up now means being comfortable in trendy but relaxed clothing and footwear that keeps one’s feet on the ground and not tottering on 6-inch stilettos. 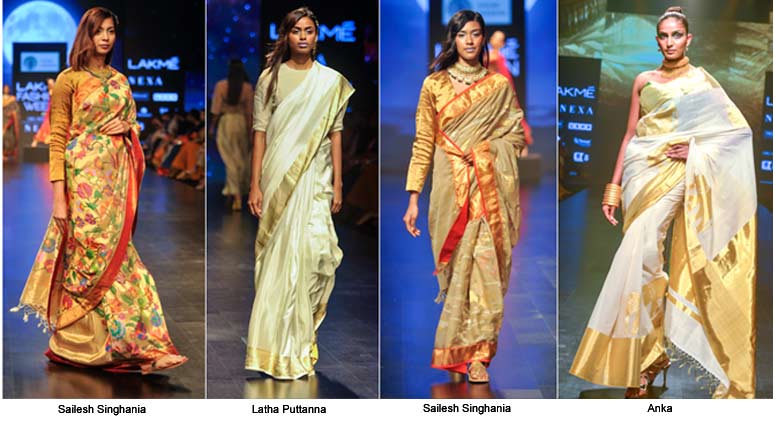 The 6-yard wonder thankfully will never go off the fashion charts as shown by Sailesh Singhania, Latha Puttanna and Anka. The former brought the beauty of brocades on the scene, while the Anka gave the South Indian white and gold Kerala sari a revival in the form of contemporary weaves and motifs that will appeal to young trendsetting generation. Latha worked with the South Indian weaves to offer a modern option. What is great is that the sari is allowed to speak its traditional language in its natural form and not cut up into garments that lack a fashion direction. 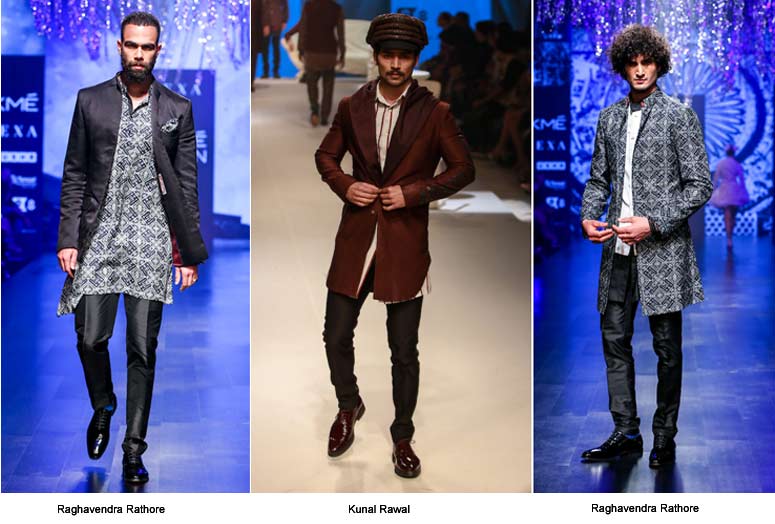 If cropped trousers are the look for 2019 for men, on the other end of the spectrum it’s intensely fitted trousers and jackets that are making a fashion statement. Designers Raghavendra Rathore and Kunal Rawal are giving a firm assent to the ankle length figure hugging trousers that leave little to the imagination. The jacket is short and lean to match the look teamed with sock-less loafers or moccasins this body-hugging duo is the fashion direction for this season. A word of caution though, this silhouette is only meant for men with perfect abs and physiques. The portly male can go for the tried and tested comfort shape. 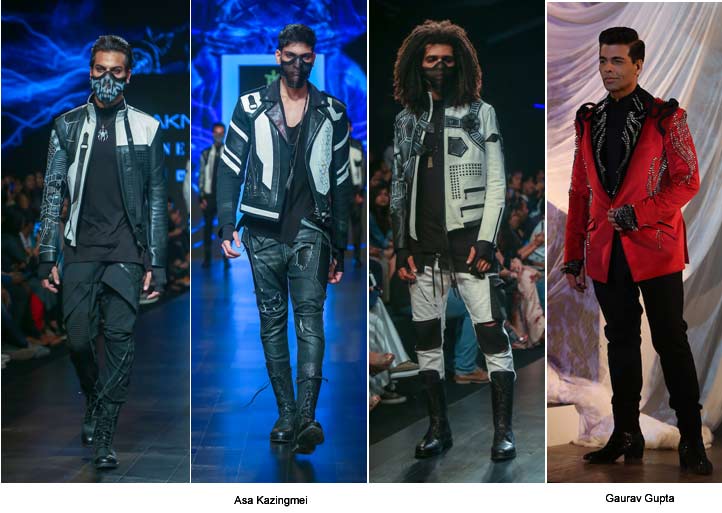 For 2019 men’s wear seems to have several trend options. What with the rebellious Rap culture taking centre stage, designers like Asa Kazingmei and Gaurav Gupta are ensuring that the male dresser has an aggressive fashionable wardrobe to choose from. Asa’s “Bionic’ collection is all about leather, denim, fierce prints, embellished with studs, chains, rivets and metallic detailing for biker’s jackets, fitted jeans, asymmetric tunics in black, grey and navy.  Gaurav however stays formal and a little colourful with red as the favoured hue for men’s jackets that sport epaulets and shoulder detailing. It’s wonderful that the Marvel comics super heroes are having an influence on men’s fashions and making our guys look like men with brains and brawn. 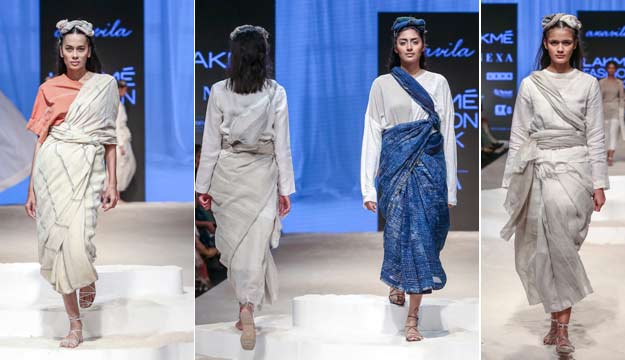 Experiments with sari drapes have been seen for centuries. The popular traditional Gujarati, Parsi Coorgi, Bengali, Assamese styles are quite popular and well known. Now for the 2019 season designer Anavila Misra, whose linen saris are coveted by the famous fashion connoisseurs offers another drape – the Vietnamese option. This requires a loose comfortable blouse, which many women will welcome, and no petticoat. It’s a slightly complex drape but very convenient and easy to handle since there is no trailing pallav or complicated pleats to handle. For our busy 21st century life style, where running to catch a bus or train is a daily chore, this drape may be just perfect for quick action on the run. 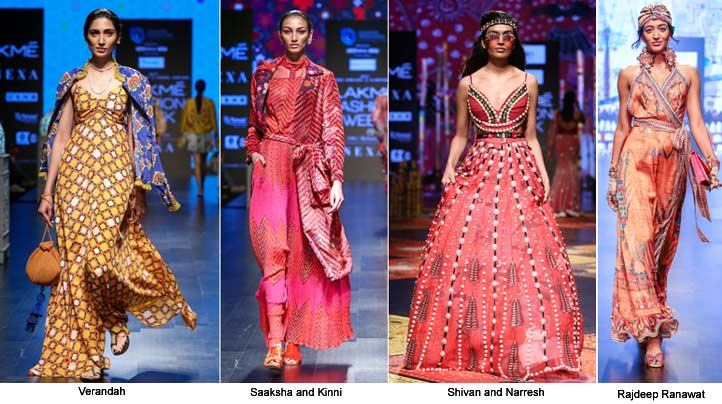 Prints will never go off the fashion charts and for 2019 the inspirations are getting crazier as designers search beyond flora and fauna for ideas. Verandah’s theme was the Mughal era with Jahanara’s sartorial inspiration bringing back the prints in motifs that had daggers and minarets on the garments. Shivan and Narresh looked towards the crafts and paintings of India. It was Bengal’s Kalighat Pattachitra art that got the duo’s creativity into top gear and when they turned their gaze towards the Tholu Bommalata leather puppetry of Andhra Pradesh the amalgamation was unbelievably noteworthy. Saaksha and Kinni did not control their print creativity and went totally wild with innumerable prints combined into a mass of designs. Rajdeep Ranawat allowed his love for Istanbul appear on not only his creations but also added the prints and motifs on the footwear and accessories. 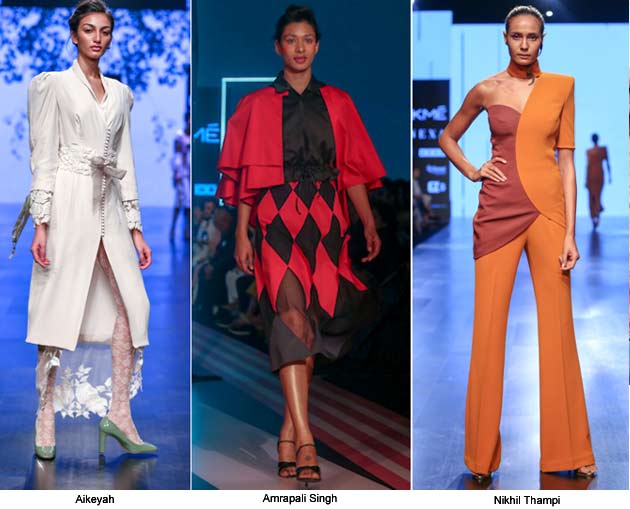 There is a marked desire to bring back the past in fashion and that that’s what Aikeyah, Nikhil Thampi and Amrapali Singh have done. Aikeyah’s 1940’s look with patterned stockings, soft feminine shapes is a reminder of the glam Hollywood years. Nikhil Thampi’s; power shoulders bring in a whiff of the 80’s when power dressing was prominent among the female head honchos. Amrapali’s belted, knee length, frocks recreate the glamour of the 50’s with detailing being in the forefront. With everyone longing for the good old days, fashion takes a cue to give a hint of that Ache Din in your wardrobe. 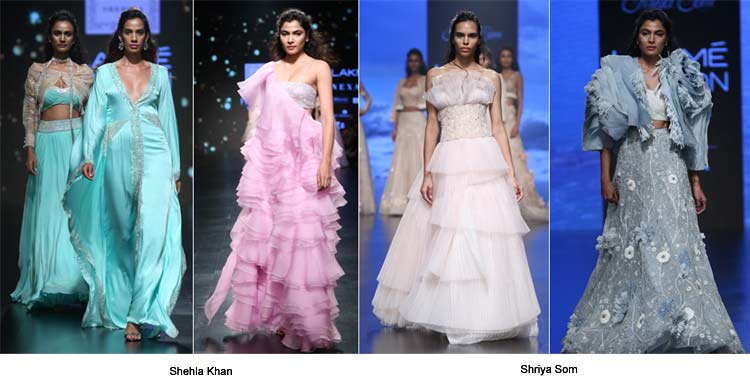 With society billionaire weddings, movie premieres, foreign appearances before royalty, every woman needs to be Red Carpet ready if she wants the paparazzi to motor drive their cameras as she glides in. Here Shehla Khan and Shriya Som have perfected the Red Carpet look that guarantees the lady will be featured on every Page 3. Embroidery, crystals and metres of chiffon, tulle and Georgette are a ‘must have’ in the wardrobe. The ball gowns have to be so elaborate, grand and stunning that Cinderella’s version that was dreamt up by her fairy godmother will look like a kitchen maid’s uniform in front of these glam beauties. Ruffles, frills, tiers, layers create the magic that is needed to be outstanding in stiff sartorial competition and who knows maybe a Prince Charming may be at the lady’s feet. 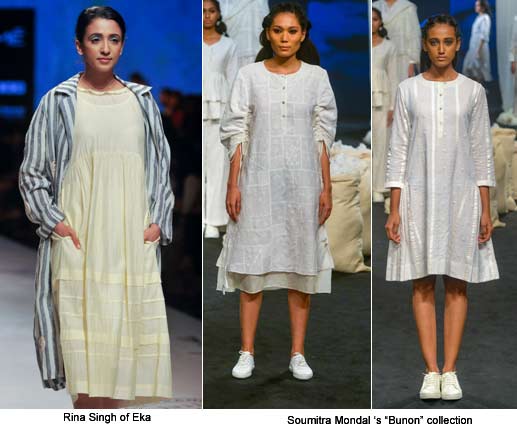 Nothing makes a greater impact than simplicity. No over the top dazzle but instead go for purity and elegance, which is favoured by designer Soumitra Mondal for his “Bunon” collection of feminine silhouettes in white Khadi, which he unveiled in Tokyo and then launched at Lakmé Fashion Week Summer/Resort 2019. Rina Singh of Eka also kept her silhouettes comfortable and loose with layers of 3-4 garments in soft mul-mul making a fashion statement. Women whose waistlines yo-yo often will love these boxy and simple shapes and now they will be trendsetters no matter what their measuring tape says.