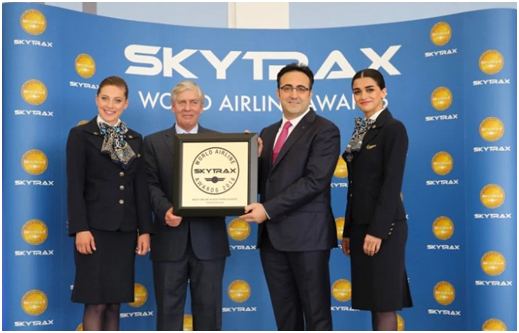 For the sixth year running,Turkish Airlines has been chosen as “Europe’s Best Airline” in the 2016 Skytrax World Airlines Awards. Skytrax is the most respected global airline passenger survey organisation in the industry, its World Airline Awards described as “the Oscars of the aviation industry.” Six years running is a real accolade and demonstrates Turkish Airlines’ continued commitment to the passenger satisfaction and development within the industry.

The independent survey evaluates traveller experiences across a wide range of airport services and then evaluates key performance indicators – from check-in, arrivals, transfers, shopping, security and immigration right through to departure at the gate. This year’s

awards were based on over a million questionnaires completed by nationalities worldwide. The survey covered 550 airports worldwide and consequently unveiling an unrivalled perception of the airline industry across the globe.

M. İlkerAycı, Turkish Airlines’ Chairman of the Board and the Executive Committee states; “Every year it delights us that millions of travellers again recognise Turkish Airlines as the “Best Airline in Europe”. The airline continues to be renowned for its seamless services, including our dining and in-flight entertainment experiences. The award marks a continued period of success for us.”

The results of the 2016 World Airline Awards were announced on 12th July, in the SkyView, Hall 1, at Farnborough Airshow. The award was presented to Turkish Airlines’ Chairman of the Board and the Executive Committee M. İlkerAycı by the CEO of Skytrax, Edward Plaisted.