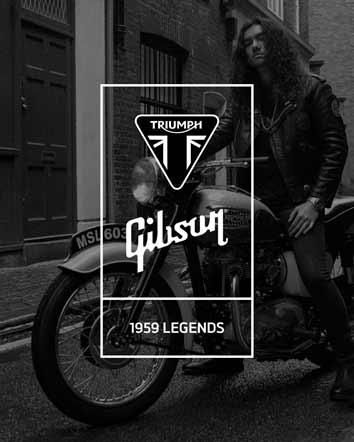 In what seems like rather a unique collaboration, the iconic 127 year old guitar brand Gibson has entered into a partnership with another 120 year old Triumph Motorcycles. The collaboration is based on the legendary 1959 Gibson Les Paul Standard guitar and the equally legendary 1959 Triumph Bonneville T120 motorcycle, with the shared ambition to support the Distinguished Gentleman’s Ride and its global charity efforts for men’s mental health and prostate cancer awareness and fundraising.

Gibson, the leading iconic guitar brand, has shaped the sounds of generations of musicians and music lovers across genres for 127 years. Founded in 1894 and headquartered in Nashville, Gibson Brands has a legacy of world-class craftsmanship, legendary music partnerships, and progressive product evolution that is unrivaled among musical instrument companies. The Gibson Brands portfolio includes Gibson, the leading guitar brand, as well as many of the most beloved and recognizable music brands, including Epiphone, which has been on every stage since 1873, Kramer, the original MADE TO ROCK HARD guitar brand, MESA/Boogie, the home of tone, and KRK, behind great music for over 30 years, and Maestro, the founder of effect pedals. Gibson Brands is dedicated to quality, innovation, and sound excellence so that music lovers for generations to come will continue to experience music shaped by Gibson Brands. 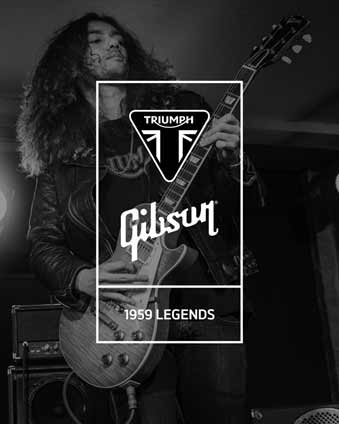 The Triumph Bonneville, famously named to celebrate Triumph’s 1956 land speed record on the Bonneville Salt Flats in Utah, USA, was the original British superbike and a race-winner straight out of the crate, chosen by famous motorcyclists of the past for its legendary handling, style, and character. Updated for 2021 with even more performance, capability and style, it’s that handling, character and iconic looks, married to modern rider-focused technology that makes the new Bonneville family THE authentic modern classic choice today.

Triumph has a glorious racing history, competing in and winning races in almost every class and field of motorcycle sporting achievement. From winning the second ever Isle of Man TT in 1908, through to 1960s road and track domination in Europe and America, right up to contemporary racing achievements with the 675cc Triumph triple powered 2014 Daytona 200 win, the 2014 Isle of Man Supersports TT win, the 2014 and 2015  British Supersports titles and World SuperSport racing, and in 2019, with another victory at the Isle of Man Supersports TT, by Peter Hickman.

Triumph Motorcycles provides all of the teams with race-tuned 765cc triples, each of which is based on the class-leading Street Triple RS power plant. Triumph’s racing activities are further bolstered by a return to the British Superbike paddock in 2021 with a factory-supported race team, Dynavolt Triumph, in the British Super sport Championship. In 2021 Triumph announced their forthcoming entry into the Motocross and Enduro worlds as well as a new factory racing effort, with a commitment to top tier championship racing in both Motocross and Enduro series.