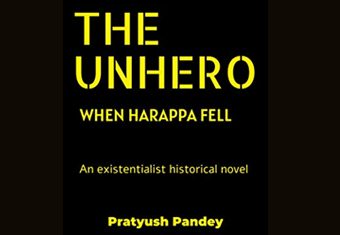 The central character in the book, Rohaan, who has fought bravely in a war to defend the ancient city of Harappa, realises the futility of death in a battle. Through the life of Rohaan, the author Pratyush Pandey raises important questions about the values attributed to the ultimate sacrifice expected from citizens during an invasion. Can ordinary citizens be expected to fight unto death to save their city from invaders? A battle needs special skills and killing tools. Rohaan’s war is a hand to hand combat by an untrained citizen with enemy soldiers in the streets. Is
Rohaan’s decision to migrate to Babylonia  an act of cowardice? Should he have stayed, eventually to a certain death  in the hands of invaders, but fighting for honour and the city? This is a question that we do not mull over  in the context of today’s world. Invasions appear to be a thing of the past. But really, are they? Iraq’s invasion of Kuwait in 1990, American invasion of Vietnam (1954) and Iraq (2003)  involved ordinary citizens. Syria, Afghanistan, Somalia and Yemen have faced wars involving civilian deaths in the recent past.

War is a subject that has been discussed extensively since the two World Wars. The World Wars were mostly fought in trenches, but it is estimated that civilian casualty was to the tune of 56.4 million.

The events are set in the ancient city of Harappa, of which we know very little, because it’s writings have not yet been deciphered. This makes the task difficult for the author, because he must assume names and the language of communication. Every language is a cultural package reflecting etiquette and social interaction. The author has tried to overcome this hurdle by giving the characters the culture of our era. This, perhaps, helps in relating to the persons in the events described. But it also fails to contribute to further information or description of the Harappan culture and physical environment. This setback is overcome by the fluent style of writing, the description of subtle emotions and sequence of events which impact the thoughts of the hero, the un-hero.

The story is well narrated, but it’s not really about Harappa, though Harappa’s fall is the prop for the events. It’s really about the involvement of ordinary citizens in war, and it’s unfairness. The fourth Geneva convention (1950) explicitly states that civilians must be protected, but in reality this has been difficult. This book makes a good case for the un-protected civilian during an invasion, and his limited choices, in an interesting read.

The reviewer, Mrs Manjusha Mishra, is a senior architect, visiting faculty at many presitigeous architecture colleges, and consultant to international organisations. She has published many papers, reports, reviews and edited books.
Related Posts