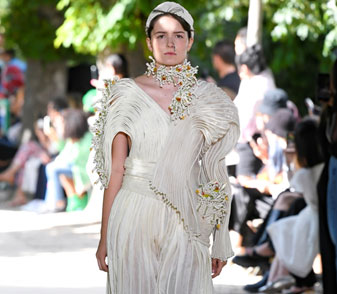 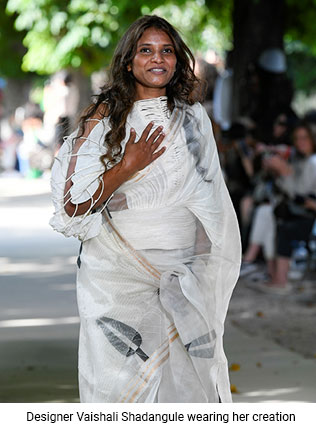 Indian fashion designers are finally making waves on international fashion platforms and events, bringing the spotlight on the amazing Indian crafts and crafts people. The Paris Haute Couture Fall-Winter 2021- 2022 fashion show had two Indian designers presenting their collections. Vaishali Shadangule’s label Vaishali S was one of two international guest designers that have been invited by the Fédération de la Haute Couture et de la Mode to showcase their couture collection at the event.

On 8 July, 2021, the verdant pathways of the Lycée Victor Duruy Highschool, an iconic Parisian landmark on the left bank in Paris, became the runway where Vaishali S presented a compact collection of 30 looks, very appropriately titled ‘Shwas’ = ‘Breath. The memory of the recent second wave and the shortage of oxygen, when that puff of air inhaled was the most precious luxury, and perhaps the inspiration for Vaishali’s wearable art collection. She stayed true to her signature techniques such as cording, engineered deconstruction and texturing. It was a blend of craftsmanship from across different states of India.  There was Merino wool woven in Maheshwar, Khun from Karnataka and other indigenous weaves from West Bengal.

For her debut Paris Haute Couture show Vaishali partnered with Forevermark, the diamond brand from the De  Beers Group. Vaishali says, “I am elated to have been selected by such a prestigious platform to showcase my passion for textiles and my commitment to sustainability. India has a strong design language in terms of craftsmanship combined with social impact, richness of technique beyond embroidery or plain manufacturing. The idea was to put the Indian weave on the highest platform, in its purest form.”

The Vaishali S launched her namesake lable in 2021.  Working with authentic hand-woven fabric and perennially telling a culturally rich tale about India’s rich textile heritage, the brand has endeavoured to celebrate Indian handloom since its inception in 2001. As a strong believer of the “ESG” stamp, Vaishali S. is dedicated to zero waste and circularity with tangible social impact across several states in the country and redistribution across the whole chain of the ecosystem. Vaishali has previously shown at New York Fashion Week and her collections are stocked at high-end boutiques in both London and Milan.

Fashion Soiree ‘Medusa by Sonal Jindal’ showcase at
prev next