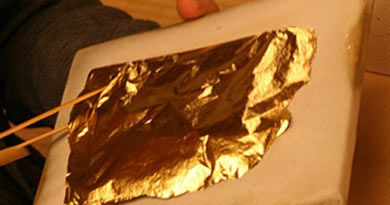 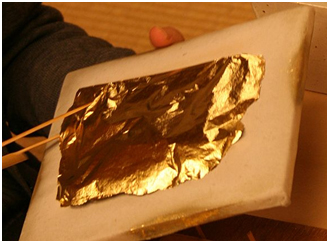 Amidst the hurly burly of the walled city of Jaipur, “Mohalla Pannigaran,’ the area housing approximately 3000 families is quiet today.  Most of the shops in the lane are closed. Upon enquiring, I am informed that there has been a death in one of the families and in keeping with the customary practice, all work is stopped until the next day. This is the community of silver and gold foil makers, who have been in this business for generations. The word ‘Pannigaran’ translates to ‘the one who makes foil (panni). There is much bonding within the community of these makers of foil or Varq. I am here in my quest to learn about the craft of making edible silver foil, which is popularly used in Indian sweets, gulukand (rose petal preserve), paan, biryani. The use of silver and gold foil, which is typically of 0.2 µm-0.8 µm thickness, for garnish, is popular across South Asian nations.This silver or gold foil is also applied on the statues of Hindu deities. The silver foil sheets are extremely fragile and handled between sheets of paper. 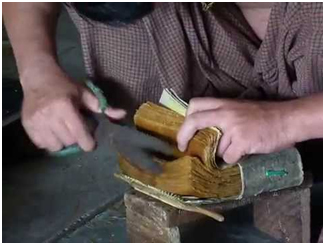 Within India, the craft of making silver and gold foil dates back nearly 1000 years or more. The process traditionally involved manually pounding particles of silver or gold between the layers of ox gut or cow hide. The crafts person are from the Muslim community. As awareness of the process amongst vegetarian communities grew, this method of production has been abandoned over the last few years, and alternate modern techniques with the use of machinery have gained popularity. As a fallout, the traditional craft as practised by the Pannigarans of Jaipur is now facing extinction under the hammer of faith, hygiene and automation.

I am here to find out more about the sudden shift in sensibility of the consumers and the manufacturing process. My persistence pays off and I am introduced to Yaqub, one of the ‘Varqsaaz’ to understand the controversy behind it. ‘’Janaab, let me tell you that this art is not only concentrated amongst Muslims as you see here, in other parts of Rajasthan & other states even Hindus are involved in it,” he opens up. Yaqub enlightens me about the history , ‘When Jaipur was being settled by Maharaja Sawai Jai Singh 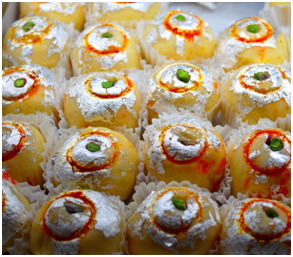 II, we came from Agra and settled down in Sanganer, the outskirts of Jaipur. Later on,the King, gave us the land to settle in the walled city. Hence, ‘Pannigaran ka Mohalla came into existence.”

The making of silver foils has been in news for some time. Reportedly, Surendra Karnavat, a diamond Jeweller wanted to set up a machine to make ‘Varq’. He lobbied against gut-pound ‘varak’ as unhygienic, and non-vegetarian. Subsequently, the animal rights activist Maneka Gandhi too lent her support to the cause. Media reports informed that pannigars select cattle by feeling their intestines, and extract the intestines from live cattle while they are hot. These intestines are then made into pouches, and silver is beaten in between them till it is thin enough to be sold. The method is filthy and the end produce is certainly not pure silver. This information led to various governments banning the gut-pounding process of manufacturing of Varq.

To get the other side of this issue, I met up with Surendra Karnavat at his residence in Jaipur. He is a devout Jain, and Jainism forbids anything that involves hurting another creature. He explained that his entire efforts were to 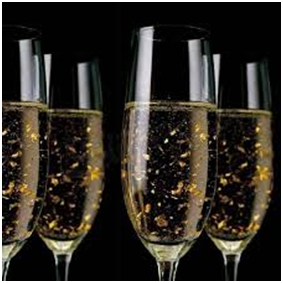 reduce human intervention and doing away with use of animal skin or hide. He claimed to have developed the paper that can be used in lieu of the animal skin that is used while pounding the silver. “This is very big industry”, he claims. “India uses over 300 tons of silver leaves in paan, chyawanprash, tobacco products, ayurvedic medicines, mithais and temples. It is used in Germany on food (the EU food number is E 175), France on photo frames. In Japan it is everywhere – interiors, tea, instruments, frescoes, temples. In fact, Kanazawa has a Gold Leaf Museum. Entire Southeast Asia uses varq, to pay homage to Lord Buddha. It is used on chocolates, cocktails and liquors – German Goldwasser and the Swiss Gold schlager are examples — soups, salads, ice creams, coffee. Beauty and anti-ageing products are proclaiming the beautification property of gold and silver, and adding it to their crèmes, face-packs etc. Traditional medicinal streams such as Ayurveda and Unani have always endorsed Gold and Silver to have medicinal properties. Gold leaf has been used for jewellery, for art decorations, picture frames, and gilded art”. His reasoning is strong. 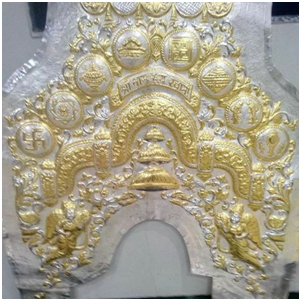 “Since the Pannigars and others involved aren’t following the standard operating procedures, this product, despite having huge potential, is not exported. My endeavour is to export it”, says Karnavat. He revealed another odd practice amongst the Pannigars. “The ‘Varqsaaz’ do not teach it to their daughters. However, their daughters-in-law are taught this”, informs Karnavat.

Pannigars think otherwise. “Our ‘Varq’ is purely hygienic”, emphasises the person who I met. “Look, now we are using a paper that is made in Japan and the process of making it can be viewed on internet as there are many videos of it”, says he.

Karnavat denies it vehemently. “Japan uses the carbon treated paper and the artisans here don’t use it. They are still using the leather and some chemical powder like soap powder is smeared on it so as to make the surface of leather smooth and even. 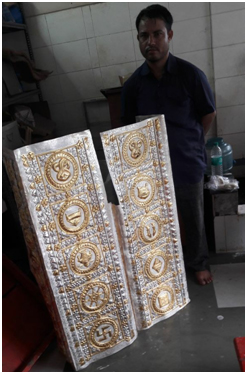 Otherwise the ‘Varq’ developed will be non-uniform.” Karnavat shares a video of the making of ‘Varq’ with the help of machines. However, in some parts of the Country, the ‘Varq’ Makers do use German Plastic that can withstand long hammering hours. This controversy has dented the whole aspect of business.  The topic will be trending for some time now.

Delhi High Court has lifted its stay from the ban imposed by Delhi Government and the petitioners, the ‘Varqsaaz’, have decided to approach FSSAI to convince them that ‘Varq’ is not unhygienic as the animal skin used was dried & processed before use.

In all, the fight between Man versus Machine, the tradition versus modernization, may not end up in favor of the Pannigars. The need is to adapt with changing times.