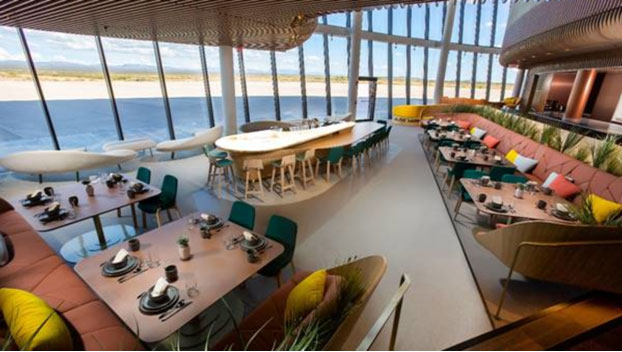 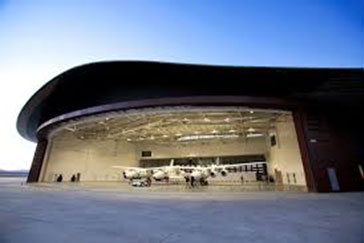 Those waiting to catch their first Virgin Galactic Space flight, you have good news. Now you can continue to wait in the brand new luxury-waiting lounge at the ‘Spaceport America’ facility in New Mexico. It is ready and fitted with super expensive and very impressive everything, right from the coffee bar to the toilet seat. The facility should appeal to the hundreds of space-travelers-in-waiting, who have already paid up $200,000 for the 90 minute flight into the upper atmosphere. Their wait will soon be over in first half of 2020.

Richard Branson founded the venture in 2004, and has already spent millions of dollars. The project is a tad delayed due to a fatal mishap resulting in the loss of life of a co-pilot.

As per data provided, the Departure and Arrival section is on the first floor and is named Gaia. Gaia is zoned into practical, formal and informal spaces which will host the space operations team, Future Astronauts and their family and friends. It is designed as the social hub of the building, where everyone is part of the Virgin Galactic family; Future Astronauts will share breakfast with spaceship pilots, grab coffee with rocket engineers and pass the time of day with the team from Mission Control. 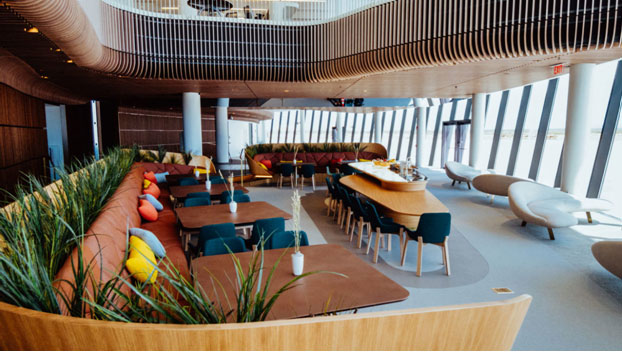 The colour scheme is coordinated with the surrounding of Spaceport America, which is located on 18,000 acres of State Trust Land in the Jornadadel Muerto desert basin in New Mexico, United States directly west and adjacent to U.S. Army’s White Sands Missile Range. A lot of thought has gone into every detail. As per information for the Press, the floor design, furniture and fittings promote social interaction and human discourse – a sense of togetherness and unity. There is an elevated, interactive digital walkway. The focal point of Gaia is the Barista Island, a central bar made of back-lit Italian marble hovering above hand-crafted oak.

The second floor is named Cirrus, representing light, air and flight. It is connected to the community hub of Gaia below through a double height atrium. This area is home to Mission Control, the Mission Briefing Room, the Pilot Corps and the rest of the Flight Operations team. Mission Control is a dedicated space for flight operations. Outside this space, the Flight Operations team and the pilots are positioned to give an unrestricted view of ground operation areas including the apron and runway.

Virgin Galactic’s space fleet will be housed in the Gateway to Space hangar which is already home to VMS Eve. This huge expanse in the middle of the building is large enough to accommodate two carrier aircraft, each with a wingspan of 140 ft along with five Space Ship Two vehicles.