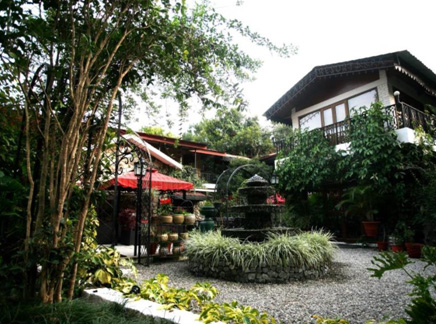 We are all nomads at heart, ever seeking to break loose from the yoke of our daily drudge and dash off into the wilds, albeit the ‘wilds’ being not too far for a quick exit. For the dweller in the concrete jungles of Delhi, the dash is usually northwards, where there is the promise of the Himalayas in the deep yonder. Heeding the recommendations of a friend, I took a trip to the Vishranti Resort near Dehradun. This was where the then Indian skipper MS Dhoni got married; Make My Trip listed it as a 4½ Starred jungle retreat. It is just a short flight away. I was game.

Boutique resorts come with the promise of the unexpected, unlike a large chain, where one has a clear idea of what to expect. Located as it is, in the beautiful Doon valley, at the edge of the dense protected forests,
Vishranti was full of pleasant surprises. First of the surprises, spotted soon as we drove into the gates, was an 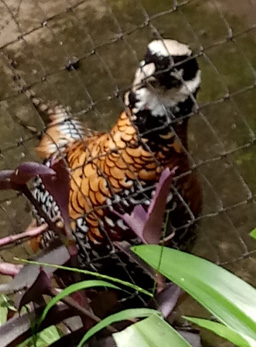 elaborate aviary with some of the most exotic birds from across the planet. Kind of birds I had never seen or seen perhaps in some zoo in the distant past. I could count at least six varieties of parrots, as many varieties of ducks, pheasants, turkey and more. Sun Conure, Blue Crowned Conure, African Grey Parrots, Orange winged Amazon, Patagoian Conure, Yellow Golden Pheasant and Silver pheasant natives of China, Burma, Borneo, the Indonesian Crested bearded Bantam, the pretty Cocktiels, Japanese Ring neck Pheasants. The sign on the cage of the California Ring Neck pheasant said ‘(Hybrid from Chinese Pheasant) eggs from France’. There were the Mandarin Ducks of South China, Muscovy Ducks of Mexico, Uruguay, Peru, Carolina Duck from British Columbia; another row of cages had the turkey. I checked if they appeared on the menu. No, they did not. The well-maintained aviary has many large cages, looked after by a special team of caretakers. The rare Indian species are missing, as there is law prohibiting purchase and ownership. The bird watchers will be thrilled with the variety of local species that live in this thickly wooded region and can easily be spotted. 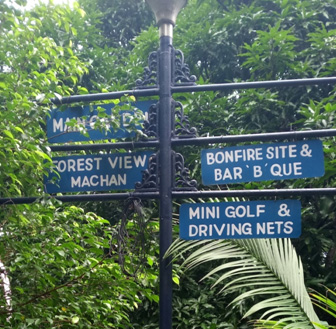 The pet-friendly Vishranti Resort is the labor of love of a larger than life man, Michael Dalvi or Mike. Collecting rare and exotic birds is one of Michael Dalvi’s passions, and he goes to great lengths to acquire them at huge cost. He purchased the 23-acre land, away from the city, with the vision of a place for friends and tourists, starting out with constructing a house for his family. Slowly, over the years, more structures came up, as planned and conceived by Dalvi, adding more rooms or separate blocks of rooms. Cottages with covered verandahs, rooms around the heated pool, the bar, various dining areas, restaurants, recreation centers, several lawns for large parties or private gatherings, gazebos and more, spread around the property. But everything here is a reflection of Mike’s personal journeys, his past, his passions and interests. Everything here tells a story. Vishranti is a family enterprise, jointly operated by Dalvi senior, his daughter Madhurika and son Madhav Dalvi. The Dalvis treat their guests like family. One of the three is always there. Madhurika’s dogs follow her around and can be found dozing at her feet. It almost feels that one is a personal guest of the Dalvi family, and not at a hotel. 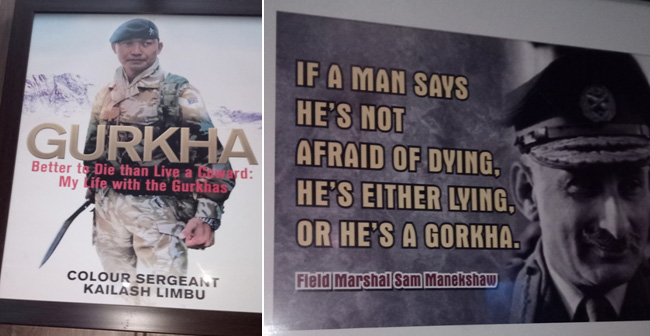 The presence of Mike’s father and grandfather is also well preserved, and I was soon to meet them.The glass panes of the main door bear pictures of the coat of arms of the Indian Army. Step inside, and there is more. Large pictures of 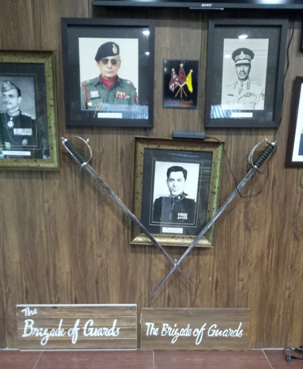 the significant moments and persons from the Indian Army, soldiers, generals, impressive quotes. “If a man says he’s not afraid of dying, he is either lying or he is a Gorkha – Field Marshal Sam Manekshaw” Thus reads a large framed poster of the Field Marshal. Incidents of valor of Indian soldiers, their victories, the wars, the memorable battles fought, are all recorded and noted in various pictures and posters on the walls around the restaurant, the reception. One could be in a Defense Club. But all this is part of the family’s legacy. Mike’s Grand Father was in the British Indian Army and fought in World War-I. And his father, Brigadier J P Dalvi of the Brigade of Guards and Commander 7 Infantry Brigade, fought during the 1962 Sino-Indian War in NEFA. He and his men were captured by the Chinese People’s Army, and lost their lives. The Brigs Resto Bar is dedicated to the memory of his father and his brigade. A framed epitaph in his memory hangs on the wall. Pictures of officers, swords, coat of arms, medals, are all an ode to the valiant warriors. The large glass windows look out at the jungles. The stories are all there. Mike himself was a cricketer of repute, playing in the Ranji Trophy tournaments, and the memories are all retold in the memorabilia, pictures, signed bats, personal notes, and caps. M.S. Dhoni’s words of appreciation after his stay here, are framed. The welcome note on the Menu at the Brig’s Resto Bar says ‘Consider this your home away from home’. Having met Madhurika and Michael Dalvi, I can say the sentiment was genuine. 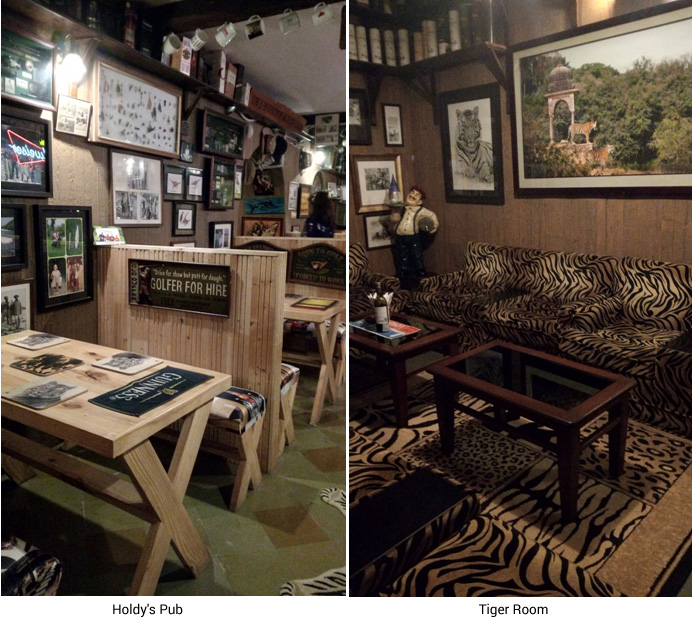 Both father and son, Michael and Madhav Dalvi are Doon School alumni. The Holdy’s Pub is Mike Dalvi’s tribute to his House Master and Dy Headmaster at Doon School, Mr R.L.Holdsworth, a highly accomplished 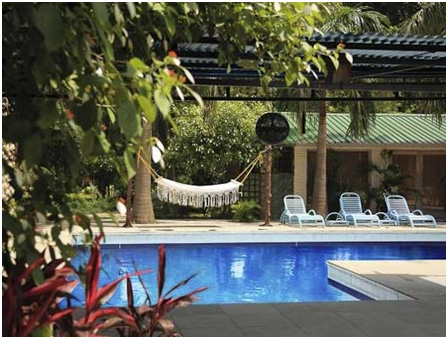 gentleman, and a role model to young Mike. Each of the pictures, the knick-knacks on the bar, the fishing fly that hangs there, framed poems and letters from friends wishing Mike on his 60th, the nostalgia. The Tiger Room, a private section within Holdy’s Pub, gives away the reason for its name at first look.

Vishranti has its own kitchen gardens that supply fresh organic, chemical free produce. The menu exhorts you to eat the fresh salads without fear, as 100% pure. The dairy on the premises supplies fresh organic milk, and there is the poultry with free-range chicken. The Menu is exhaustive and extensive. The names of the entrée evoke a feeling of nostalgia of old clubs, the gymkhanas. All meals are cooked fresh on order, waiting time 45 minutes minimum. This avoids wastage or using pre stored frozen half-cooked fare, I am told.

The rooms are large and luxurious, imaginatively named Aram (rest), Khamoshi (silence), Chain (satisfaction) Sukoon (peace). Each has its own style and USP with something different to offer. Tastefully done up with colonial style furniture, Burma teak or wrought-iron beds, antique four poster beds with drapes, great art work, paintings, books, fire place, closets,  large bathrooms with antique free standing tubs and old fashion shower closets, Afghani and Kashmir carpets and drapes, large windows looking out at the forest, high ceiling covered by sloping tile roofs. Of the three suites, Aman, Shanti, Vishram & Vishranti, I stayed in the Shanti suite, a spacious unit with stone clad walls, an antique double door with a raised threshold, opening out to a covered verandah where two islands of comfortable cane sofa clusters beckoned to simply lounge and watch the rain. The struggle was whether to simply lounge indoors in cosy comfort and read my book or venture out for some of the other attractions. 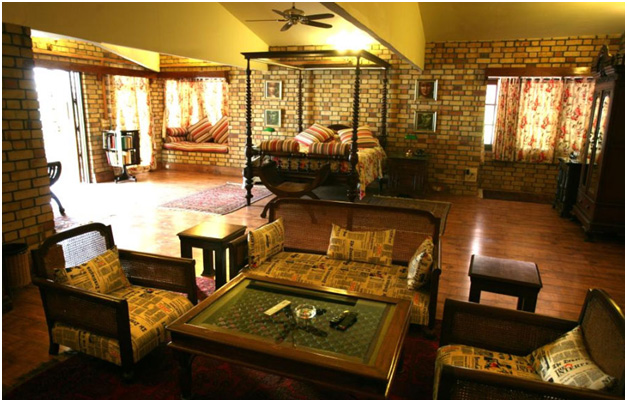 In the shade of the solitary Rudraksha tree nestles the Rudraksha Tree Spa. It is equipped to give a variety of therapies and messages like Aroma, Swedish, Balinese, Sports Massage, Shiatsu, Thai Dry massage and more. Book in advance. The Gymnasium is located near the recreation center, and fitted with all the right equipment for the fitness freak not wishing to break his/her routine. The recreation center is another place, which evokes nostalgia of old colony clubs. However, this one here has more equipment. Besides the pool table, carom, chess, checkers and other such indoor sports, there is also the air-hocky and foosball tables. Right outside is a zone for little kids with slides and swings, though a little overrun with vegetation. The heated swimming pool is a major attraction for day or night swims in all weather. 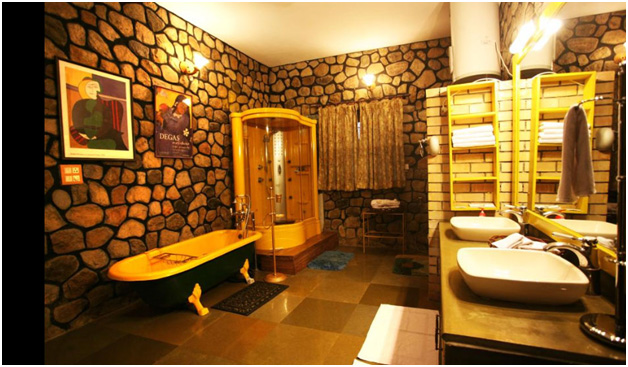 Vishranti is a work in progress. At the time of my visit, construction of a set of entirely segregated cottages was underway. Located at the far end of the property, it promised complete privacy. The grounds were impeccably maintained, water bodies and fountains free of algae, no mosquitoes and bugs, or dank musty smells, despite its location in the woods.

Indeed, I reiterate my point that it is the genuineness and warmth of the people that makes for a complete and truly 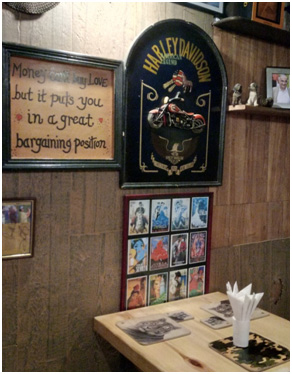 luxurious experience. Vishranti has the plush facilities, expected of a high-end property such as this, but what make it special, is the Family Dalvi who freely share their hospitality with warmth and inclusivity. This is the place to go to with the gang of friends, or family, to bond, celebrate, or simply go alone, as if going back home.

How to get there

By Air – Dehradun’s Jolly Grant airport is the closest at 45-50 Kms. It is a long drive through the congested city or via the circuitous longer routes.