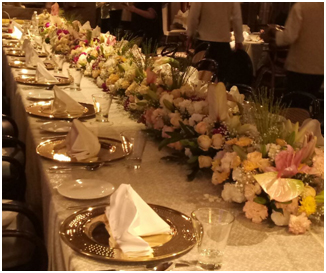 The K3 at JW Marriott New Delhi Aerocity hosted a showcase of a wedding’s grand décor, assorted cuisine, and impeccable service, with élan. The entrance to K3 was transformed with high sets of peach drapes, overhanging floral trellises and large urns filled with the loveliest of flowers. Hundreds of Tiger Lilies, anthurium, carnations, geraniums, transformed the venue. A large faux cake waited on a round table. The dinner tables were laid out and the floral runner along the center mirrored the overhanging flowers. Three large television screens played the recordings of the royal wedding of Prince Harris and Meghan Merkel, as they took their vows, rode the horse drawn carriage et al, to sort of complete the mood of the experience.

This was JW Marriott’s subtle announcement of their calibre, in not just hosting grand weddings within its properties, but also extending the entire experience at any other venue as well. Rohit Sharma, the dashing Marketing and communications Manager, explained in detail about the concept.

We were suitably impressed with the decorations and the settings, and the culinary and F&B services were equally delightful. But, then, we were in the K3, which already has a legacy of multiple kitchens, grand buffets. The invited guests indulged in Prosecco, Champagne, Gin n Tonic, or all of the three. Exotic vegetarian and non-vegetarian snacks made the rounds. The large open buffet offered a range of cuisines from Japanese, Italian, Pan Asian, delectable dimsums and flaky fish to Laal Maas and Dum biryani. Later, the live band kicked up the decibels as the regulars quietly focused on the chow. We did remember another wedding closer home, which the entire nation attended on social media and missed the Dhol and Nagada and genteel guests doing the booty shake to peppy film songs.